It’s arrived — thanks in part to a successful Kickstarter campaign, this nearly comprehensive compendium of American ‘Race Films’ is here in a deluxe Blu-ray presentation. 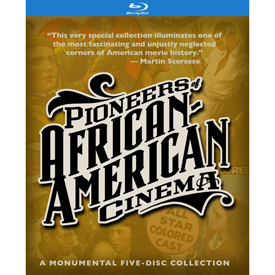 Black Cinema History? We didn’t hear a peep about any such thing back in film school. Sometime in the 1980s PBS would broadcast a barely watchable (see sample just below) copy of a creaky silent ‘race movie’ about a ‘backsliding’ black man in trouble with the law, the Lord and his wife in that order. The cultural segregation has been almost complete. It wasn’t until even later that I read articles about a long-extinct nationwide circuit of movie theaters catering to black audiences, wherever the populations were big enough to support the trade. After three decades of study a sizeable quantity of African-American movies has finally been unearthed. Something previously shoehorned into ‘Black History Month’ is now an ongoing subject for study. The first collection of these films that can describe itself as comprehensive is Kino Classics’ Pioneers of African-American Cinema. Approached from a partly academic perspective, the collection is embellished with content from worthy scholars. The films themselves are given excellent presentations. 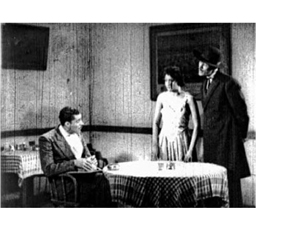 Kino’s disc producer Bret Wood has been talking online about this project for almost a year now, and the result is worth the wait. Major funding came through a Kickstarter campaign, and the executive producer is DJ Spooky, aka Paul Dennis Miller. The presentation is spread across five Blu-ray discs and packaged and appointed with the kind of respect afforded vintage classic cinema. The films and transfers are all excellent; in the instances where only partial films remain, new titles explain missing scenes. And this is no one-source collection. The archives involved include the Library of Congress, the BFI, the Eastman House, MoMA and the National Archives. Some prints survived only because they were found in foreign archives. A silent film was given Italian inter-titles, proving that they were distributed overseas.

The variety of content shows the thematic elements that black filmmakers found commercially successful. Comedy is worked into most shows, and many sound pictures either include a musical element or present stories that show off musical personalities. The dramas lean heavily toward morality plays that favor a church element, with sinners and troublemakers finding redemption, or accepting the consequences of their bad behavior. Most of the shows have ‘all-colored’ casts, and say so proudly on the posters. Black heroes play detectives, cowboys and ex-soldiers; in the melodramas wicked men frequently take advantage of naïve women, young and old. In terms of morality the films don’t deviate very far from the norm, indicating that the producers intuited a basic conservatism in their audience. Dirty Gertie from Harlem is a showcase for the New York model Francine Everett. The music content of this unofficial remake of Rain is pretty weak, but an unearned comeuppance arrives in the form of a vengeful ex-lover. Violence makes for interesting drama in any cinema. 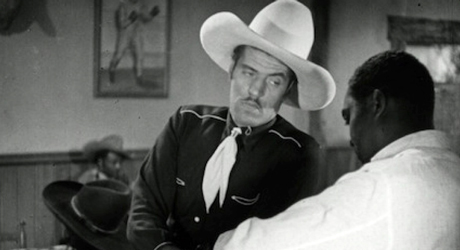 A few surviving films take on serious topics, such as the KKK. Although they couldn’t be described as defiant or revolutionary, we do see a yearning for social justice. Some of the most charming films aim simply to give black audiences the same movie pleasures enjoyed by whites. The cowboy picture The Bronze Buckaroo offers up handsome Herb Jeffries as a virtuous singing cowboy. Black kids need heroic identification figures too. In 1939 blacks were even barred from most major sports teams.

Although they were produced in many cities, even Hollywood, Chicago is considered the production hub for Race films. The collection is a showcase for Oscar Micheaux and Spencer Williams, the auteurs of the form. They were able to make it pay for three decades, a worthy accomplishment for anybody involved in motion pictures. Their work doesn’t need defending even though it never approaches Hollywood standards; Williams in particular has an extremely loose notion of what constitutes action continuity across cuts. If Italians don’t care about sound synchronization, why should these men worry too much about some other cinema’s notions of acceptability?

One truly eye-opening picture is Oscar Micheaux’s 1925 Body and Soul, starring Paul Robeson in a double role as a ‘good’ man and as a fake Preacher (shades of Night of the Hunter) who seduces and torments an innocent girl. Robeson’s terrific acting elevates the experience. We’re told that he later repudiated the film, even so far as to deny that he ever made it. 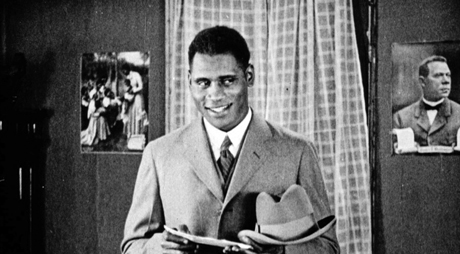 Also important to mention is a hilarious discovery, a silent comedy short called Mercy the Mummy Mumbled. Half improvised and aspiring to elicit nothing more than a few laughs, it’s a little gem. A huckster hires a fool to play an Egyptian mummy, so he can sell him to a scientist seeking a subject for an experiment. The print suffers from extreme nitrate decay at the beginning and especially at the end, by which time much of the action seemingly dissolves under the barrage of distorting, erasing blemishes, just as in the experimental film Decasia. But we can see just enough to follow the action, and we stick it out because the film is so funny. Producer Luther Pollard didn’t mince words; he said that “colored players can put over good comedy without any of that crap-shooting, chicken-stealing, razor-dealing, watermelon-eating stuff that the colored people generally have been a little disgusted seeing.”

Kino’s interview featurettes talk about the history of African-American cinema, its filmmakers, and other topics. I remember researching a white New York producer-director of the late 1940s who boasted that the right kinds of movies could clean up in the Negro Theater Circuit — in the immediate postwar years a new, relatively more prosperous urban black population was eager for any and all entertainment that catered to their community. By that time the race barrier was at least showing some cracks — some of his actresses were concurrently playing in legit ‘white’ dramas on Broadway. A young actor in several of these films was a young man named William Greaves, who was sufficiently ambitious enough to secure an important role in the white-produced race film, Lost Boundaries. Greaves later became an honored and respected film editor, and eventually the maker of a sophisticated experimental film, Symbiopsychotaxiplasm: Take One. Although Greaves had an exceptional career, his example shows that these pictures were not made in a total vacuum.

Of special interest are some additional archived films and fragments that record contemporary black life in the ’20s and ’30s. We see a film on a church congregation, and documentary films that might have been part of a Roosevelt work-culture project. The collection is a serious work of cultural-historical curatorship.

The Kino Classics Blu-ray of Pioneers of African-American Cinema serves triple duty as entertainment, an educational resource and a cultural treasure trove. Most of the films are in excellent condition for their age; all are given careful treatment.

Here are the contents, from the Kino Educational web page. The set list has changed more than once so I hope it’s still accurate; I compared it to the disc’s menus but may have made a mistake. I’m informed that some items are on the Blu-ray only: 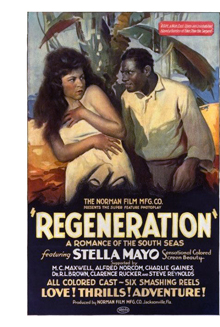