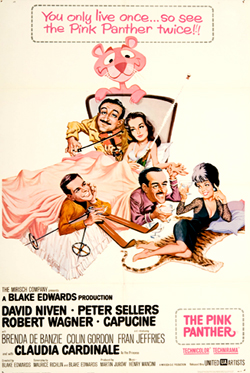 A chameleon by nature, Peter Sellers had been turning in inspired comic performances since the early fifties – but it took the role of the habitually hapless Inspector Clouseau (originally intended for Peter Ustinov) in this first of seven The Pink Panther comedies to catapult him to superstar status. Though director Blake Edwards’ screenplay placed the bumbling detective at the center of a comic ensemble that included David Niven (who signed on expecting his role to be the lead), Capucine and Robert Wagner, Sellers would have free reign over the film’s even funnier sequel, A Shot in the Dark. Henry Mancini contributed the ultra-lounge score along with the  memorable theme song.  A lamentable animated cartoon series helped kill off theatrical cartoons.