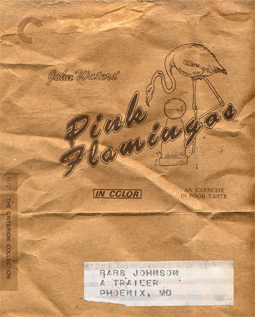 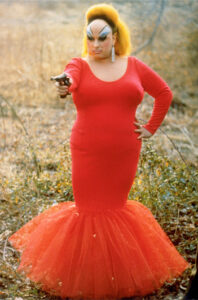 In 1980, J. Hoberman and Jonathan Rosenbaum began an exploration into those elusive films that could only be seen at the witching hour—a time when most theaters were closed and, it was implied, most decent people were home in bed. Published in 1983, their book was a catalogue of curios that defied categorization until Rosenbaum and Hoberman named them: Midnight Movies. But even alongside renegade efforts like Jodorowsky’s El Topo and Jack Smith’s Flaming Creatures, John Waters’ Pink Flamingos stood out as the tarnished gold standard for transgressive entertainment; it felt then, and it feels now, like a genuinely lawless movie—as of this writing, it remains banned in the town of Hicksville, New York.

A gender-bending satire of a great republic’s rush to the bottom, Waters’ movie could have been called Contempt if Godard hadn’t got there first; the 1972 film works best as a postmortem of Nixon’s America, and a premortem for the putrefaction to come. Still scrutinizing Pink Flamingos in 1997, Hoberman wrote, “If scandal, sleaze, and celebrity worship are our national religion, then John Waters is an American prophet.” Soothsayer or not, Waters’ story of lowlifes aiming for the high life predicted today’s reality shows; it out-jackesses Jackass and makes The Real Housewives look like a Tupperware party. 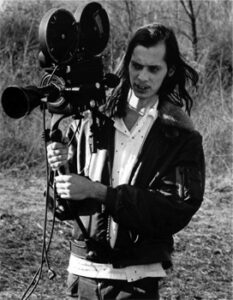 The 26 year old Waters was clearly no conventional filmmaker; with dirt cheap productions like Hag in a Black Leather Jacket and Dorothy, the Kansas City Pot Head under his belt, he was more saboteur than director. But he was moving up in the world—Pink Flamingos had a $10,000 budget. Funded by his parents, it was a homemade film from the start yet it wrangled a slot at the Third Annual Baltimore Film Festival where it sold out on three consecutive evenings. There was a genuine reality show waiting in the wings, 1973’s An American Family—but try as they might, the dysfunctional family circus put on by the Loud family, the “stars” of that PBS documentary, had nothing on Pink Flamingo‘s degenerate merry-makers, Babs, Edie, and Crackers—trailer-park bottomfeeders prowling the wastelands of “Charm City”, otherwise known as Baltimore. 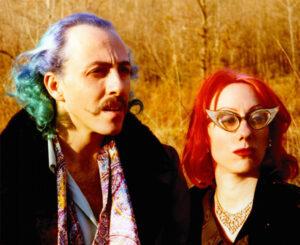 As Waters’ screenplay would have us believe, Babs is in fact the real life performance artist Divine in disguise, and even with a double layer of lip gloss and ultraviolet mascara, her putrid character shines through: she’s recently been crowned “The Filthiest Person Alive” and already facing a formidable challenge from a similarly depraved floozy by the name of Connie Marble. Connie and her husband Raymond are intent on co-opting Babs’ crown, and no mean, twisted, or disgusting stunt is too outrageous (as Connie and Raymond, Mink Stole models blazing orange hair while David Lochary sports flowing locks of lavender and green).

Along with other nihilistic narratives like Billy Wilder’s Ace in the Hole and Elia Kazan’s A Face in the Crowd, Pink Flamingos is pure Americana. Waters cheerfully paints his own home town as a smorgasbord of debauchery—you name it, it’s on the menu; cannibalism, castration, incest, coprophagy, and sex with a dead chicken (murder most fowl). While Babs and Connie go toe to toe in a filthy fight to the finish, they’re serenaded by songs that sparked many a line dance on American Bandstand: LaVern Baker’s Jim Dandy, Surfin‘ Bird by The Trashmen, and, most germane to Divine’s impulsive personality, Little Richard’s The Girl Can’t Help It. 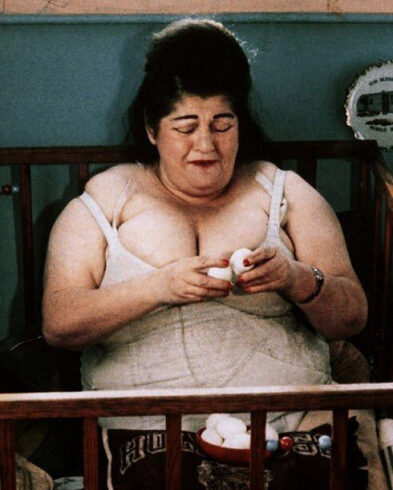 Similar chart toppers made up the playlist for Waters’ candy-colored musical Hairspray, a surprisingly sweet-tempered turn from the Pope of Trash—but filtered through Pink Flamingos‘ scuzzy sensibility, those hummable tunes take on the apocalyptic tenor of punk rock; the world is imploding so… everybody dance! It’s possible that bands like The Dead Kennedys and The Misfits were merely following Divine’s lead; the portly drag star played the lithe Jackie Kennedy in Eat Your Makeup, Waters’ short film from 1968, and Waters’ faithful troupe of malcontents, Mink, Lochary, and Edith Massey as the Egg Lady, were nothing if not misfits.

But it was the notorious G.G. Allin, dubbed “the most spectacular degenerate in rock n’ roll history” who may have learned the biggest lesson from Divine and friends—and what he did on stage couldn’t hold a doggie bag to Pink Flamingos, in particular its scandalous finale where a famished Divine encounters a scruffy miniature poodle soiling a sidewalk in Boise. It’s truly an indigestible moment, not only for the woozy audience and the flustered pooch, but for the stout-hearted Divine himself (co-star Cookie Mueller wrote, “He was a professional. It was in his script, so he was going to do it.”) 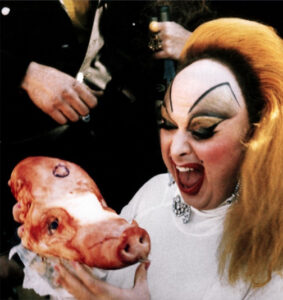 Speaking to Vanity Fair in 2017, Waters still maintained the confidence of the 26 year old who made the movie; “It (Pink Flamingos) still works, I know that. It didn’t get nicer; it might have even gotten more hideous. Even people who think they’ve seen everything are sort of stunned by it. They may hate it, but they can’t not talk about it. That was the point. It was a terrorist act against the tyranny of good taste.” Waters’ film may indeed have “gotten more hideous”, the laughs it engenders now are tinged with a Strangelovian sense of dread. Unlike Slim Pickens, Divine doesn’t hitch a ride on a nuke, but Waters’ “terrorist act” remains a laugh-packed preview of the end times. 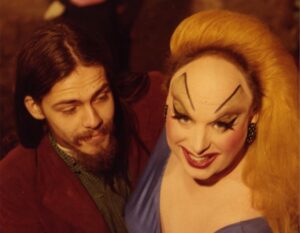 Waters’ sleazefest is probably never going to look better than it does on the new Blu ray release from Criterion—his photography, primitive at best and all the better for it, is startlingly vibrant; Divine’s blood red, form-fitting bodycon practically vibrates. There are the usual Criterion-curated extras, chief among them the feature length documentary, Divine Trash, Steve Yeager’s award-winning 1998 documentary about the making of Pink Flamingos, and a brand new interview with Waters conducted by Jim Jarmusch. For nostalgia buffs, there’s an old-home-week tour of the film’s Baltimore locations led by Waters himself (who is clearly happy to revisit his haunts.)

Other features include two audio commentaries with Waters from the 1997 Criterion laserdisc and the 2001 DVD release. Rounding out the extras are a selection of deleted scenes, alternate takes, and the original theatrical trailer.

Back in the material world there’s a print essay from critic Howard Hampton and an excerpt from Cookie Mueller’s 1990 book, Walking Through Clear Water in a Pool Painted Black. Also found in the slipcase is a barf  bag. Just in case.