Most of us know Betty Grable from the famous pin-up copied by the cover artwork for this release; by 1944 Ms. Grable was Fox’s biggest earner, and the Armed Force’s most popular daydream babe both back home and at the front. This movie pulled in the multitudes, even though Betty doesn’t even play a model suitable for pin-up duty!  But just imagine: in almost any town during wartime with a war industry somewhere nearby, movie theaters played around the clock, with sold-out audiences, to accommodate swing shift defense workers. 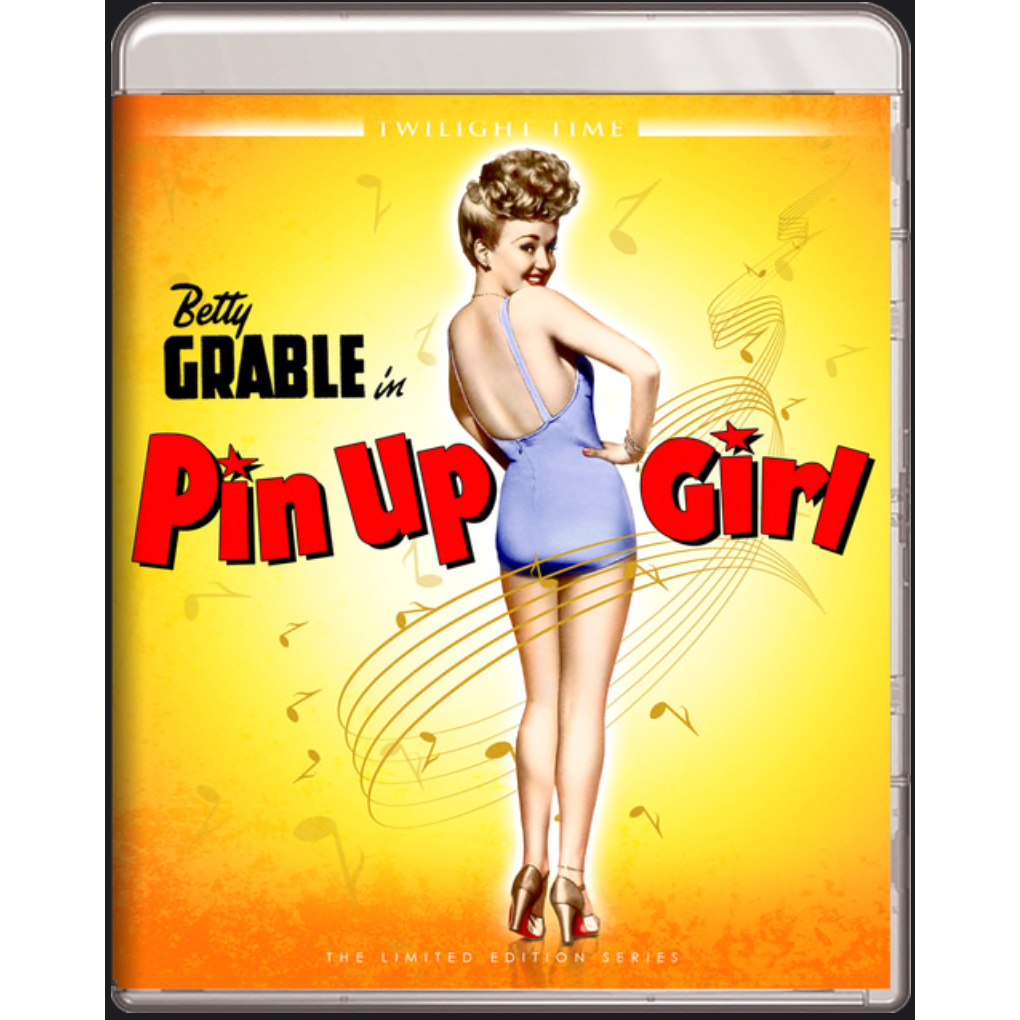 Personality is everything in the movies — even in the Golden Age, plenty of film performers ‘clicked’ for reasons having nothing to do with acting chops or obvious talent.

Pin Up Girl trumpets its patriotic aim from the get-go, with a title sequence that jams in all four service anthems, behind an image of Betty Grable in her patented perky rear-view pin-up pose. It then immediately jumps into a U.S.O. scene that may have been an influence on 1941 — happy soldiers and sailor are offered smiles and treats by a line of hostesses that look like cream pastry with lipstick on top.

We love wartime morale movies, even the all-escapist silly ones where ordinary folks wear tuxedos to nightclubs, and every girl’s boyfriend wins The Medal of Honor. Any 4-F guy with good looks could get a speaking role, and talented ‘kids’ like John Payne launched into strong careers. Fox specialized in bright, fun musicals with current swing bands. The favorite The Gang’s All Here knocks us out with fancy cinematics, but its basic sentimentality is even stronger.

Betty Grable was a special case. Like Elvis, we can see her managers saying, why work too hard making an elaborate movie, when putting her in anything will bring in the fans?

Betty is both the star attraction of Pin Up Girl and its entire reason for being; she of course was the pin-up queen of WW2 and one of the most popular stars of her time. This show leans heavily on Grable’s charms and flashy Technicolor to get by. Even with four writers it’s a disorganized mess of ideas and characters without a central idea — its basic appeal now is pure nostalgia. In the 1970s, a tiny repertory movie house near Los Angeles’ MacArthur Park called the Vagabond featured frequent double bills of these Fox musicals, in Technicolored prints borrowed from the studio. Gays seem to love them, and took the spectacle of Grable in as pure camp. The blank theatricality appealed: in the very first musical number, a bevy of apple-pie perfect USO hostesses sing to desperate servicemen that “We can’t give you a break.” They’ll all have to settle for a hot dog … “A weenie in a roll.”

Did this thing really need writers? Reckless USO hostess Lorry Jones (Betty Grable) has problems telling the truth; she gets engaged to multiple casual boyfriends. Although Lorry and her bespectacled best pal Kay (Dorothea Kent) are going to steno jobs at the Pentagon, she tells her suitors in uniform that she’s an entertainer en route to star in a grand USO tour. In New York, the girls wangle their way into the nightclub of Eddie Hall (Joe E. Brown) under the lie that they’re the dates of Tommy Dooley, a celebrated Navy hero of Guadalcanal (John Harvey). Of course, Harvey just happens to be there. He falls in love with Lorry, who compounds her lies by claiming to be a big-time Broadway performer. All of this makes Eddie’s headline singer Molly McKay (Martha Raye) green with jealousy. Molly determines to trip up Lorry any way she can. As wartime fantasies go, Pin Up Girl should have been ‘accidentally’ allowed to fall into the hands of our enemies: Tojo and Göebbels would turn sick, realizing that the U.S.A’s limitless production capacity can build a million tanks PLUS whip up hundreds of grandiosely fluffy movies just for the heck of it. In this fantasy, things in the States are so comfy that Lorry has no trouble finding an apartment in the Washington D.C. area, and can log unlimited travel miles. Remember the phrase ‘Is this trip necessary?’  Hitler’s henchmen might believe that Americans have nothing more serious to worry about than getting a good seat at the Stork Club.

Every scene gives us Betty resplendent in one beautiful costume after another, just sexy enough to keep the boys wanting more. Movies joke about it, but it’s true — hundreds of thousands (millions?) of young guys were conscripted and shipped out before they had the chance to chase the girl next door. Those in combat areas were definitely preoccupied, but from the rear areas to camps across America, most servicemen had little little chance for contact with women. I’m at a generation’s remove from this history, so if these movies about apple pie girls back home can make me nostalgic, the average GI must have needed his pin-up of Grable, Gardner or Hayworth. Betty Grable’s agents were right: she didn’t have to do nothin’ but stand and smile. She was like the picture of a juicy steak in a Tex Avery cartoon, generating applause just by being there.

I personally never got the appeal, but I wasn’t around when the hottest thing imaginable was a woman in a Lana Turner sweater. I suppose that a zillion women measured themselves against Betty as well. She dances passably, and does some nice steps with Hermes Pan in a not-bad Apache number. She’s not all that great of a singer, but she does have the personality for her time. Her first song “Listen to your Teacher” confects the movie situations in which a novice sings without preparation, yet the performance turns into a tightly choreographed number. The movie’s idea of taxing Betty’s acting ability is to have her put on a pair of glasses so nobody will recognize her. That tired gag works because… well, nobody’s taking things too seriously.

Besides being a clotheshorse, Betty sports hairstyles that seem wildly overdone – lots of hair is piled high in rigid waves and curls. It looks as if some blonde-haired parasite has taken residence on her head. If they aren’t wigs, there must have been ten hairstylists on the set, working over Betty’s tresses between shots.

A number of distractions keep the plot going, but none of them gel into a real story. Lorry’s girlfriend Kay gets the ‘tall tale’ subplot off to a great start. Then Kay disappears from the story without explanation, taking most of the humor with her. We like all the guest stars, but they make generic impressions. Joe E. Brown is good for one Big Mouth joke, and then settles into support duty setting up Betty’s romance with the handsome guy from Guadalcanal. The amusing Martha Raye equals Brown for true talent and shows her singing ability in a couple of jaunty numbers, but she’s given a tiresome super-jealous role to play. In one scene Raye even wears an envy-green outfit. None of these people are allowed to shine; they’re left as impersonal as the roller skating dance troupe that fills time with a spectacular number, and a pair of tap dancers that illogically make the jump from a mid-western USO gig to the big time in a swank D.C. nightclub. Efficient bits are provided by regulars like Eugene Pallette, Dave Willock, Marcel Dalio and Mantan Moreland. Don’t blink and you’ll see Nat King Cole as a pianist. Adele Jergens is one of the canteen girls, so heavily made up that it’s not easy to tell them apart. Martha Raye ended up almost exclusively playing what I call ‘Nancy Walker’ roles: she’s funny, the butt of jokes, and no threat to the ego of the leading lady. I looked up the charming Dorothea Kent, and very little in her film work that rings a bell. Was her Kay dropped from the storyline because she unbalanced the show away from pure adoration of Betty Grable?  Charlie Spivak’s band receives high billing, but if any big, big songs are in the soundtrack, none sounded familiar. I guess that the presence of Betty Grable meant that Benny Goodman, Glenn Miller and Carmen Miranda could be saved to shore up some other musical product. We’re told that future composer Neal Hefti is a member Spivak’s band.

Pretty and sweet, Pin Up Girl is going to have to get by on almost 100% nostalgia appeal. It’s a mainline dose of the Bette Grable drug, however, and for her fans this review is hardly necessary. The show ends with a large-scale military drill number that shows Grable leading 64 women in rifle drill on the nightclub stage. At the fadeout, we’re still hoping that Dorothea Kent will return. With most of the show’s plotlines unresolved, the picture just ends on the march number and a reminder to buy war bonds. The Twilight Time Blu-ray of Pin Up Girl is a big improvement on the older (2006) DVD. It had issues stemming from an imperfect composite negative, that left many scenes with ‘hue pulsing,’ apparently from unevenly-faded matrices. Also Fox’s musicals (and all their color movies) tended toward an over-use of blue, and always look colder and harsher than they might. It’s almost as if one of Technicolor’s famed consultant-tyrants was slightly color blind.

This new restoration fixes those problems, but seems to have been a tough wicket for color — all hues are a bit subdued, especially after memories of screenings in which we needed dark glasses to prevent burning out our retinas, and going color blind. Actually, the less garish look suits the movie well… at least the Fox folk pulling this one together didn’t go for a teal & orange color scheme.

Grable fans will be impressed by the inclusion of a deleted, or alternate musical number called This is it, that was eventually replaced by a first version of the Listen to your Teacher” song. Richard Schickel provides a laid-back audio commentary that recounts basic facts about the stars. Viewers interested in seeing this movie already know there was a war on back then and would have appreciated a little more depth. Schickel could be a good raconteur but he wings this one .. big pieces of the soundtrack stick through when he runs low on new topics to discuss.

We miss Julie Kirgo’s liner notes, which always carried a little extra something. The new scribe for TT is Mike Finnegan, whose polished words don’t lack for information and context.

A trailer is included.