How could England have won the war without him? Horatio Smith sneaks about in Nazi Germany, liberating concentration camp inmates right under the noses of the Gestapo. Leslie Howard directed and stars in this wartime escapist spy thriller, as a witty professor too passive to be suspected as the mystery spy. 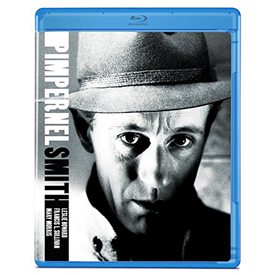 I like movies made during WW2 to boost morale in England and America, the two countries still able to mount defiant propaganda against the Axis. They amounted to acts of patriotic bravery, especially in England, where if Germany had won, filmmakers and actors that had ‘offended top Nazis might have come to a very sad end. Powell and Pressburger made great pictures along these lines, such as the pro-Netherlands One of Our Aircraft is Missing and The Silver Fleet. Some of the movies were dead sober serious and others were designed as light entertainment, to give audiences a laugh at the expense of the Huns and to trumpet England’s spirit of defiance. 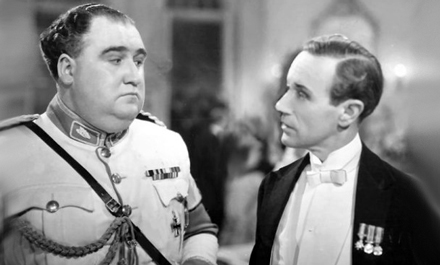 Unlike America, where a Washington- imposed cloud of neutrality dragged on all the way to Pearl Harbor, Great Britain was in the war from September of 1939, and by 1940 was expecting an immediate invasion. Documentary filmmakers chose not to soft-pedal the threat, to show the public the bomb damage and proclaim, London Can Take It!

English screen star Leslie Howard always seem something of a weakling to American audiences, perhaps because of his passive manner and slight voice in The Petrified Forest and Gone with the Wind. But he threw himself into the war effort, producing a movie about the Spitfire fighter plane, another about valiant war nurses, and a third escapist comedy thriller called ‘Pimpernel’ Smith. One of Howard’s bigger acting successes had been as Sir Percy Blakeney in Baroness Emmuska Orczy’s swashbuckling tale The Scarlet Pimpernel, filmed in 1934. In that lighthearted riff on Sidney Carlton from A Tale of Two Cities, Englishman Sir Percy pulls off daring rescues, saving nobles from the Revolutionary guillotine. He isn’t suspected because he has disguised himself as an annoying fop more concerned with poetic rhymes and the scents on his handkerchiefs. The famous quote is Sir Percy’s drivel poem: “They seek him here, they seek him there, Those Frenchies seek him everywhere. Is he in heaven? Or is he in hell? That damned elusive Pimpernel.” 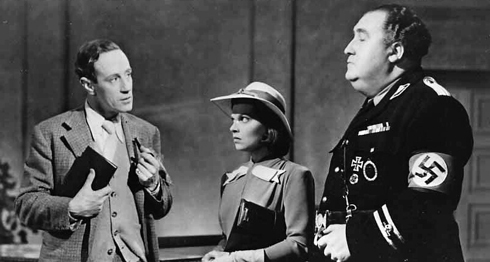 For ‘Pimpernel’ Smith Howard alludes to the character — his Professor Horatio Smith is a stuffy academic, but not a fop, so don’t expect any limp-wristed humor. But Smith does use his role as a Cambridge professor of Archeology to disguise an identical Modus Operandi — while acting apolitical and naïve, he charms the Nazis and smuggles out important refugees. Howard borrows the character for the war effort in the same way that Universal employed Sherlock Holmes to fight Nazi spies in England. Like Holmes, Smith uses his brains to outwit the enemy: “No, I hate violence. It seems such a paradox to kill a man before you can persuade him what’s right. So uncivilized.”

The movie is good fun but not a classic like Alfred Hitchcock’s The Lady Vanishes or even Gilliat and Launder’s Night Train to Munich. Some time before the hostilities break out, Smith takes a group of graduate students to Germany to dig for evidence of the ancient Aryan Civilization that the Nazis insist once ruled Europe. Acting meek and harmless, Smith is dismissed by the Nazis as a fool. While completely flummoxing the comic-opera Nazi counterespionage chief General von Graum (Francis L. Sullivan of Night and the City), Smith secretly spirits professor Sidimir Koslowski (Peter Gawthorne) out of a concentration camp. Von Graum sputters and howls as the ‘mystery agent’ keeps avoiding capture. Smith even attends an art exhibition and annoys Von Graum to his face. Of course, the fun is in this ‘putting one over on Fritz’ jokery. 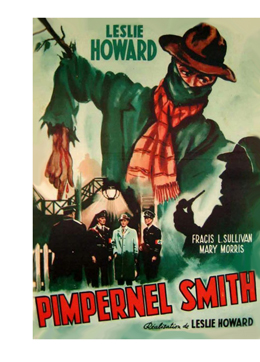 The script is rather upper-class and stiff- lipped. Horatio Smith’s students are all jolly fellows eager and earnest, and some of the humor is a little thick. An introductory scene finds Horatio Smith conducting a class as if it were a boys’ club. When a co-ed asks a question Smith doesn’t like, he makes a derogatory remark about women, and she walks out in a huff. The attitude in the hall is, ‘good riddance.’ Don’t expect ‘Pimpernel’ Smith to go down well with feminists… the ribbing given the Nazis isn’t that much worse.

It’s rather thoughtless of Smith to take his pupils to Germany. They have no idea their schoolmaster is a spy, and if he’s captured, they could be all end up in a torture chamber. In one rather unlikely scene, Smith hides from a German patrol by disguising himself as a scarecrow in a field. A German takes a potshot at it, and the scarecrow bleeds.

Forget any potential surreal effect from this. The incident instead inspires the students to become active participants in the Professor’s scheme. Today we read about American hikers captured near the border of Iran, and held prisoner for years as a way of giving our State Department grief. Horatio Smith thumbs his nose to the Germans in their own country, but his dashing exploits get none of his chipper young disciples into hot water. For amazing real-life Brit military spy exploits, one need go no further than Powell & Pressburger’s I’ll Met By Moonlight. A pair of young Brits barely out of college risk life and limb to kidnap a German general on the island of Crete. There were indeed ‘dashing’ men capable of outrageous derring-do even when capture would surely result in summary execution, or worse. Old-fashioned King & Country conditioning plus a helping of the Rudyard Kipling ethos inspired such amazing feats. Of course, they didn’t make many movies about the equally valiant spies that were unlucky enough to be caught. 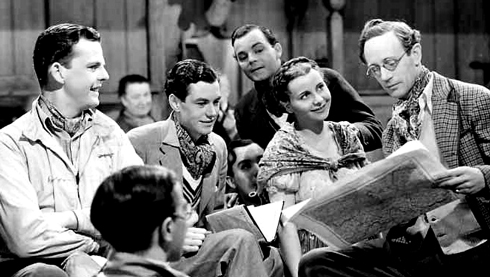 Howard and Sullivan are good, and English movie fans will have a field day identifying scores of less well-known faces. Among the pupils, Hugh McDermott (Devil Girl from Mars) is only so-so as an American exchange student, while an impossibly young David Tomlinson is another posh type on a lark fooling the Germans. Such good fun.

The picture picks up a romantic interest when Von Graum forces Ludmilla Koslowski (Mary Morris) to spy for the Reich. Ludmilla is the daughter of the man in the concentration camp, and Von Graum has promised to free him if she delivers the ‘Pimpernel.’ Of course, once Ludmilla meets Horatio Smith, she falls in with the happy spies instead. Mary Morris will immediately look familiar to fans of The Archers, but I had to look her up to make the connection — she played the unforgettable six-armed blue clockwork statue in Powell & Pressburger’s fantastic The Thief of Bagdad, the one that murders Miles Mallson with a dagger. Ms. Morris is effective, interesting and different… but the script gives her little to do but be concerned, and to marvel at Horatio Smith’s daring under pressure. 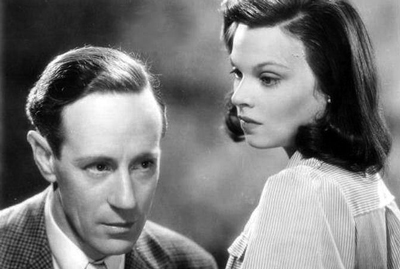 Howard’s direction moves things along well enough but still remains somewhat sedate. Our hero mostly talks his way through difficulties, so there’s a dearth of dynamic action scenes. A final pistol showdown resolves nicely with the ‘Pimpernel’ disappearing into the shadows, vowing to return. As most fans know, only two years later Leslie Howard’s war-mission airplane to Lisbon was intercepted by German fighters and shot down over the ocean north of Spain.

‘Pimpernel’ Smith has been cited as a possible source for the screenplay for 1981’s Raiders of the Lost Ark. Both Smith and Indiana Jones mount archeological digs to find relics that keenly interest Hitler, a rumored Aryan Civilization instead of the Ark of the Covenant. Smith is overconfident, almost blasé about his mission, a quality also shared in part by James Bond.

Olive Films’ Blu-ray of ‘Pimpernel’ Smith is a sterling presentation of the fondly-remembered WW2 escapist thriller, a fine B&W transfer. It’s a full 120 minutes, somewhat longer than expected for a breezy spy show. Anglophile movie fans will like the chance to see it full-length, in a decent scan. English subs will help with the accents, but the dialogue is clear — the Germans are all played by English actors, naturally, who do not try to disguise their voices.