I have the full rundown on the notorious spacey alternate ending to this sci-fi winner by design specialist Saul Bass. The ants are taking over, and they mean business. World conquest begins at a research lab in Arizona, where Nigel Davenport, Michael Murphy and Lynne Frederick try to hold out against super-intelligent hormigas that cut them off, build sophisticated weapons and instantly adapt to any chemical attempt to stop them. 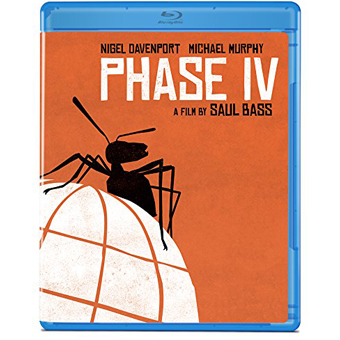 Olive Films Blu-ray of the intriguing Sci-Fi curiosity Phase IV appears to be a newer, cleaner transfer than the older DVD. Fans hoping for a certain special extra will have keep hoping, but otherwise this is a sparkling rendition of the film’s standard version.

Phase IV is serious filmed science fiction post- 2001: A Space Odyssey, graced with an ecological message and some knockout visuals. Sort of a cerebral remake of Them! but with ants that are smart instead of big, the thriller generates its fair share of tension before resolving in a welter of murky mysticism… not your annoying art-film mysticism, but the far-out deep-think variety. The days of humanity are numbered, it seems. Mankind will be stepping aside to make way for the next species to inherit the planet. 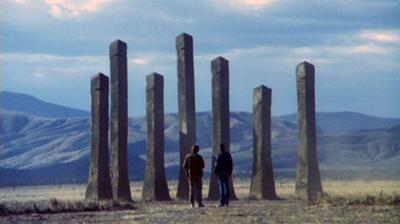 Acclaimed graphic artist Saul Bass is famous for his creative title sequences, most notably for directors Alfred Hitchcock and Otto Preminger. Stepping behind the cameras of a feature film for the first time, Bass takes an unusual approach to this ecological Sci-Fi picture. His optical effects may have dated somewhat, but their design is always superior. The many insect microphotography sequences (by specialist Ken Middleham) have yet to be bettered.

From the beginning Bass’s style relies on a heightened graphic sense. A celestial incident bathes the Earth in energy waves of an undisclosed nature. The incident passes harmlessly until scientist Dr. Ernest Hubbs (Nigel Davenport) investigates odd happenings in Arizona: ants are changing their basic social natures, ceasing to fight among themselves and banding together to wipe out their natural predators. Hubbs sets up a research lab in a sealed-off dome and invites cryptographer and communications specialist James Lesko (Michael Murphy) to join him. Hordes of ants have already driven some farmers off their land, and the experiment has barely gotten underway when the lab is under siege. Survivor Kendra Eldrige (Lynne Frederick) arrives; Hubbs doesn’t report her status or the other killings because he doesn’t want his experiment shut down. The super-intelligent ants attack the dome by building dirt-obelisks with reflective surfaces that focus sunlight. They then infiltrate the lab to knock out the humans’ generators and air conditioner. Hubbs determines to fight to the bitter end. Lesko takes a longer view. He believes that the ants will eventually prevail, and mankind’s only chance is to communicate with them. 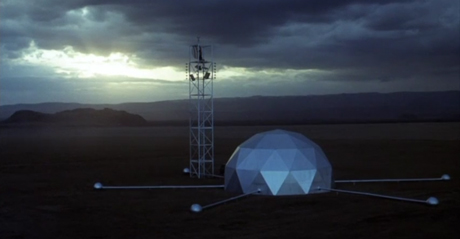 The very original Phase IV avoids those pitfalls while inventing a few of its own. It begins with a pair of scientists fighting a familiar threat but then goes in a very interesting direction. The drama is a bit constipated, with Nigel Davenport behaving a bit like Quint in the next year’s Jaws and then going berserk when he realizes he’s no match for the ant horde. Cool customer Michael Murphy trades discoveries with Davenport, but wisely puts his energy into the communication effort. 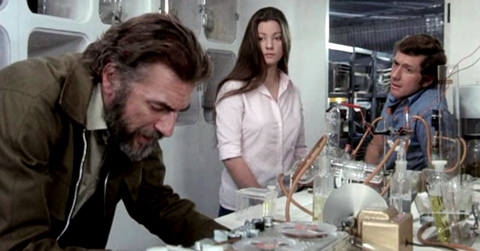 The ant colonies have developed a mass intelligence, and constitute a vast communal creature. Individual insects are like cells of this body, reasons Davenport. Each is an expendable suicide fighter. When Davenport wipes out hundreds of thousands of attacking ants with a yellow foam, we see a series of ants dragging a piece of the foam back to their queen, each dying in turn from the poison. The queen processes the yellow goop, and then proceeds to pump out yellow, poison resistant ant larvae. The adaptation is almost instantaneous. The next generation will be that much closer to victory.

The concept of a communal multi-organism creature was proposed in Nigel Kneale’s truly seminal Sci-Fi film Quatermass 2. The first thing that happens here is that all the ant species band together for the common goal of world domination. Frankly, this unity makes them immediate winners – mankind with its animosities and divisions is its own worst enemy. When Murphy breaks down the ants’ mechanical language, the film harmonizes to a degree with Close Encounters of the Third Kind. The key to everything is communication. The collective ant intelligence seems to be sensitive to humans, and genuinely curious about us as well. They seem to know that James Lesko there to parlay, not fight.

Security comes first, though, and most of Phase IV is a bizarre battle between the isolated lab dome and the ant onslaught. The ants surround the dome with towers topped with heat-reflectors — like the Markalite ray cannons that lay siege to the Mysterians’ battle dome in Chikyu Boeigun, but on a much smaller scale. The communal ant mind has analyzed the dome’s defenses: saboteur ants sneak in to gnaw away at crucial lab wiring. 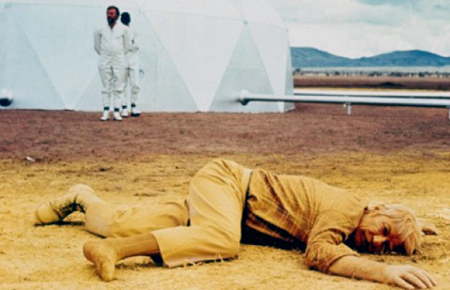 Phase IV has quite a few fascinating visuals. As seen in his famous title sequence designs, Saul Bass’s key talent is effective visual communication. His optical tricks conjure up weird space phenomena, strange silhouetted shapes on the horizon, and a few impressive (if dated) surreal images. The real wonder of the film are Ken Middleham’s incredibly good micro-cinematographic views of the ants and other insects going about their business. The focus is excellent and many shots are even over-cranked in beautiful slow motion. The film could easily have employed a number of generic ‘bugs milling about’ shots, and filled in with explanatory narration. These images are planned, choreographed and executed for maximum graphic appeal.

Macro-cinematographer Ken Middleham’s claim to fame just prior to Phase IV was The Hellstrom Chronicle, a rather hysterical apocalyptic pseudo-documentary.  His fantastic trick camerawork was surely the element that convinced the studio that an exciting thriller could be made from the idea of insects taking over the earth. We see ants arranging the bodies of their dead in long funeral rows, a chilling vision. What looks like a multi-phyla, multi-tribe meeting shows a number of incredibly enlarged ants, each with a distinctive badge on its forehead. The little emblems can’t be bigger than pinheads — how’d they do that?   The proof that Phase IV is working is that we follow the strategies of these clever little bugs with a minimum of verbal cues. We can understand what they’re doing.

The drama isn’t quite as deft, as the characters are left rather undefined. Davenport becomes irrational after an ant bite swells his hand to twice its size. (The good makeup reminds us of the first Quatermass film, The Quatermass Xperiment). Lynne Frederick, Davenport’s co-star from No Blade of Grass, is around to stave off monotony, but ultimately her Kendra becomes irrelevant, unless she and Michael Murphy are meant to be a sort of Adam and Eve ambassador-to-the-ants duo. Someone should ask Murphy about this stage of his career, for even when he was scoring big in Robert Altman pictures, he was also volunteering for all manner of oddball feature film roles, like the fairly dire Count Yorga, Vampire. The mostly British crew made this low budget movie at Pinewood, with Kenya standing in for Arizona. All in all, it’s an impressive and offbeat little movie.

The ending incorporates visuals that remind us of the later Altered States. When James and Ernest examine the body of a dead farmer, they find disturbing ant-holes carved into his palm. Bass can’t resist restaging Luis Buñuel’s signature ants-crawling-out-of-a-hole-in-a-man’s-hand gag. 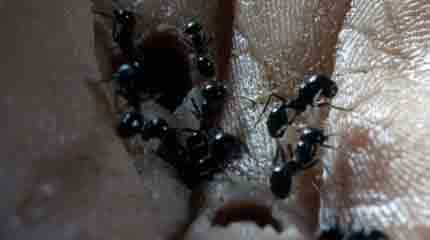 The new release has no extras, which is of course a disappointment; the movie stimulates the desire to know more about how it was made.

Fans were disappointed to learn that this new disc does not include a Phase IV discovery that came to light three years ago, in 2012. It’s long been known that Saul Bass prepared a different extended ending for Phase IV, an ‘ethereal cereal’ graphics fest that showed, or more accurately suggested the acceptance of Lesko and Kendra into the mass ant hive, and the assimilation of their spirits or consciousnesses into the New Ant Order (NAO?) We first read about this when author John Brosnan described the unused ending this way in Future Tense: The Cinema of Science Fiction, page 228:

“Bass originally filmed a spectacular, surreal montage lasting four minutes, showing what life would be like on the ‘new’ Earth, but this was cut by the distributor.”

The standard Phase IV trailer has shots not in the film, that originated in the unused ending. But suddenly in 2012, Los Angeles’ Cinefamily theater held a screening of this lost ending. Charlie Schmidlin wrote it up in an Indiewire article from June 26, 2012.

Actually, the alternate ending was screened separate from the full feature. Savant associate Darren Gross attended the screening and reported that the audience loved the trippy, psychedelic new five or so minutes of film. He did wonder if it would really have worked within the context of the rest of the movie. If Paramount cared back in 1975, they would have identified Phase IV as a potential cult head-trip movie, theirs to book at midnight shows forever. Had Savant been in charge (cough), the plan would have been to drum up a fake spat between Bass and some Paramount exec.. The attendant publicity bubble would bring more attention to the release, after which the studio could happily announce that Saul Bass’s preferred cut will be shown after all. How much imagination does that take?

Darren Gross and Charlie Schmidlin immediately saw the discovery as an obvious cue to restore Saul Bass’s approved ending and get out a new Blu-ray. Instead, three years later we have the same theatrical cut, albeit much improved. But all is not lost. It might not be on the disc, but after you check out Olive’s excellent Blu-ray, you can see the legendary lost ending online. It went up in 2012 and (has since been replaced):

Take a look! Your 5,000-word cinema studies analysis-essays, double spaced, need to be on my desk by 10 am Monday, just before the midterm review session. 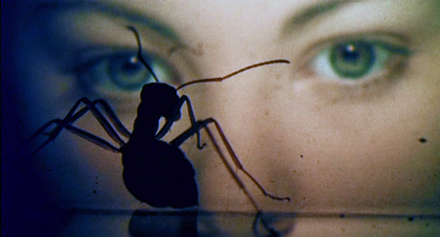 Thanks to Edward Sullivan and Bruce Holecheck for forwarding me their research and opinions,
and to Gary Teetzel for the alternate title. He’s now rewriting the whole song to go with it.