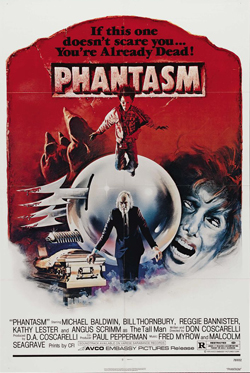 Don Coscarelli’s B-movie smash has some of the childs-eye fever dream atmosphere of 1953’s Invaders From Mars. The movie pins its notoriety on its central villain, “The Tall Man”, played by the imposing Angus Scrimm, an otherworldly undertaker who manufactures zombies out of the recently deceased. Made for 300,000, the movie took in 12 million at the box office but oddly, the inevitable sequel didn’t appear for another nine years.