Does anybody still care about great movies for small children? If so, here’s a good one. A big, furry green dragon named Elliot is the kind of playmate every lonely kid wants. It’s a non-musical rethinking of the old 1977 movie, made with taste, discretion, and plenty of heart. 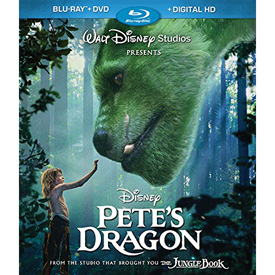 I think I watched only about four minutes of the old Pete’s Dragon on TV long ago, before ditching out. I can see how little kids might love it, but I’m glad the timing worked out for my daughter to instead be at the right age to see the truly magical The NeverEnding Story when it came out a few years later. At just five, she understood what the movie was all about. It makes for a much better early movie memory together, than watching Mickey Rooney dance his way into apoplexy about a cartoon dragon. Actually, I ditched out of Disney family fare around the time of That Darn Cat!. Taking my little brother to see the first animated Jungle Book was a chore as well. But to each his own. 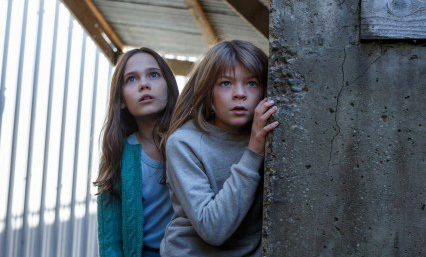 I asked for the new Pete’s Dragon on the basis of good reviews and the feeling that it was different, and I’m happy to report that it was a good choice. Discriminating parents can find decent children’s fare today, mostly singing and dancing animated animal comedies that recycle old forms (operetta, musical comedy) and mix it with sitcom humor. The new Pete’s Dragon, I’m happy to report, takes itself seriously, hasn’t an ounce of irony or ‘satiric’ attitude, and offers good values without turning into a Sunday School lecture. It’s gentle enough for smallish or sensitive kids, too. Like kiddie fare of the 1950s, the ‘hard’ content — tragedy, jeopardy, conflict — is sufficiently subdued that innocent tots should be oblivious to it. But slightly older kids won’t feel they’re being shafted with ‘kiddie stuff.’

The original 1977 Pete’s Dragon is a complicated musical farce combining live action and animation. This new show is a straight little lost boy meets furry dragon story. Young Pete (Oakes Fegley) loses his parents in the North Woods but is soon adopted by a friendly dragon he names Elliot, after a puppy in his favorite learning-to-read book. Five years later Pete and Elliot are living happily together, when they’re contacted by a logging operator Gavin (Karl Urban), who is cutting deep into the forest, and Forest Ranger Grace (Bryce Dallas Howard), who opposes him. Grace ends up taking the feral but friendly Pete home to her husband Jack (Wes Bentley) and daughter Natalie (Oona Laurence); Gavin determines to capture the dragon. Sensing that the right thing to do is to help Pete contact Elliot again, Grace consults her father Meacham (Robert Redford), who always claimed that he saw a dragon as well. But Gavin and his loggers arrive to catch the giant green beast, and manage to knock it cold with tranquilizer darts.

‘Lassie’ type stories about anthropomorphized animals can be merely sentimental, or darkly traumatic. Pete’s Dragon may be a committee movie, but in my book it makes all the right moves. Its only philosophy is that life is better if you can believe in something a little more than the grim reality around us. It doesn’t divide people into Good and Bad. Its lesson about nature doesn’t use the loggers to make a PC statement about the ecology movement. Parents can spin that aspect of the movie any way they wish. Best of all, the level of jeopardy and emotional strain isn’t particularly high. Parents are well aware that youngsters can really get rattled by disturbing content: I remember hearing kids crying in screenings of the ’76 King Kong and the ’81 Dragonslayer. Episodes where the dragon is threatened are exciting, but not particularly violent or intense. Little kids need their giant monster adventures too.

The characters in Pete’s Dragon are on the squeaky-clean side. Bryce Dallas Howard was the super-efficient executive in Jurassic World; here she’s a nurturing Earth mother with a Smokey the Bear hat, the kind of calm maternal figure every 5-year-old will love. She also looks like a red-haired cross between Christina Hendricks and Jessica Chastain, so fathers will be pay attention as well. Just looking at the trees gives Ms. Howard big ‘sense of wonder’ smiles, so she’s a ready-made dragon saver. 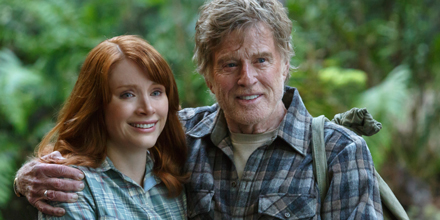 Kid Oakes Fegley (that’s a name?) has the appropriate cute looks, cocky determination and just enough sensitivity to make the finer points of the script come through. Basically starting out as a feral Mowgli, Pete discovers how nice a human family can be. At one point we get a glimmer that he’s going to go through a crisis asking about what happened to his own mother, as with the classic The Search, but the film only touches on that thought before moving on. I like to think that director David Lowery made these feints toward more serious conflicts, just to give the story some heft. We also get a hint that the authorities might want to take Pete away. It’s just so that the movie doesn’t seem stupid by pretending that a forest ranger can just keep whatever child she finds in the woods.

All the non-dragon elements of Pete’s Dragon are well done. The dragon himself is quite an achievement for Disney and WETA, the New Zealand effects outfit. Elliot is a real hybrid. He’s big and green and playful like a puppy. He’s fluffy-furry, just like Falkor of The NeverEnding Story, but he doesn’t talk. He’s not a goofball, and takes his dragon-hood seriously. He flies with wings much like those of Q, The Winged Serpent, but he wouldn’t harm a fly except to protect Pete. He’s flesh and blood, as he’s vulnerable to the tranquilizer darts. He’s not omniscient — when Pete disappears he has no idea how to find him. As in the original, Elliot has the magic ability is to make himself disappear, partly or completely. Some of the film’s nicest images show Elliott partly visible in the misty forest, like a Maxfield Parrish painting. The film’s forest images are really beautiful — all tall straight trees and foggy clearings. City kids will surely like the setting. 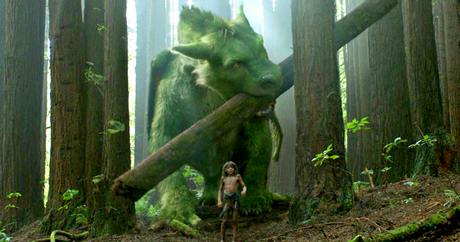 Pete’s potential new sister Natalie is nicely conceived as a pre-teen Barbara Hershey type, not a Disney Princess. Both kids do their share of Nancy Drew sneaking around, freeing Elliot from his bonds, riding on his back, etc., yet the story doesn’t stretch physical reality to extremes. This isn’t the kind of fantasy where kids outthink the parents or take charge, at least not directly. The tone is light enough for Pete to jump off a cliff, knowing Elliot will be there to catch him. Best of all, there is no separation anxiety at the finish. Everybody realizes that Elliot needs to go his own way, without a lot of, ‘Why can’t I keep Godzilla in my bedroom?’ whining. Even Elliot realizes this, when he peeks through the Meachums’ window. No rage, no overdone remorse, just understanding and a sad face. In this film, Elliot’s wet-nose discovery of a lawn sprinkler gets equal time with deep-dish dragon philosophizing.

The only joke even resembling poor taste is Elliot’s habit of sneezing on people. An interesting touch is that the film is purposefully anachronistic. Al though the cars on view are modern, Natalie and Pete play with a phonograph, and cell phones are nowhere to be found.

When I was five I was dinosaur crazy, at a time when monster fantasies of this kind were not readily available. I loved The Three Worlds of Gulliver because it had a giant alligator in it. If this show had been around I’d love it too. When I first saw The 7th Voyage of Sinbad the Cyclops scared me, but I really liked that cool dragon when it walked with the sorcerer, like a giant pet. Pete and Elliot do that exact thing together in a similar shot (top big photo). Except for the wings, the dragons share roughly similar proportions; it’s just that one is a big green plush toy. Although we don’t know where the feral Pete got his three meals a day, he surely slept snugly through the warm Northern winters, with a furry dragon for a bed.

Yep, I realize that I’m personally too old for Pete’s Dragon, although not as old as Robert Redford, who acts as if he’s on sedatives, and looks like the old version of Robert Lansing from 4D Man. Ya need something to show a little kid that won’t get you accused of bad parenting? This is a great choice.

The film was also released in 3-D but I haven’t seen it that way. Aside from its Pixar and Marvel titles, Disney seems to have given up on 3-D for home video in the domestic market. They never even bothered to do a U.S. 3-D release of their megahit Frozen.

Disney doesn’t scrimp on the extras. Mouse-approved and finessed promotional extras indulge pieces on the ‘director’s challenge,’ the design of the dragon, and some unused scenes. The director, writer and child stars sit in for an audio commentary. All three songs from the film (boy, I barely noticed them) are given music video treatments. A blooper reel is included as well. The show comes with an extra DVD disc and a code to download the digital version.