What could sear your retinas as thoroughly as forbidden cult cinema in 4K Ultra HD? The unrestrained crime-shock transgressors Perdita and Romero cut a path of lust, cult ritual madness and amoral nastiness across the U.S./Mexico border. Kidnapping, murder and theft are among their printable crimes. Álex de Iglesia’s beautifully produced slice of post- Tarantino excess arrives in a completely uncut original version. When free from political restraints, Spanish filmmakers have always taken advantage of their freedom, as with the convention-challenging movies of Pedro Almodóvar. ‘Socially dangerous’ surreal cinema got a healthy start there, with Luis Buñuel. The provocations of his L’age d’or and Viridiana still set many people on edge.

Spanish director Álex de Iglesia has made films in a variety of styles — I’m a fan of his odd romantic crime comedy Crimen Ferpecto (‘Ferpect Crime’). His first film is the well-regarded science fiction terror satire Acción mutante, partly produced by Almodóvar, but his second feature takes the violent action path that Almodóvar didn’t want to tread. Some regard it as a spin-off of an earlier David Lynch film. Its absurd, surreal excesses tap violent fantasies that mainstream films don’t acknowledge, even as they commodify them for big profits.

Iglesia’s Perdita Durango was expensively produced in Mexico and the U.S.. The screenplay is by Barry Gifford, who had previously written the source novel for David Lynch’s 1990 crime-romance thriller Wild at Heart starring Nicholas Cage and Laura Dern. That movie also featured a character named Perdita Durango, played by Isabella Rossellini. Gifford’s follow-up book 59° and Raining: The Story of Perdita Durango tells this woman’s full story.

The show is a major contender in the subgenre of hyperbolic, violent action thrillers that dial up the sex, violence and related outré content, the more bizarre the better. Director Iglesia keeps his show at a constant emotional boil with grotesque details guaranteed to outrage censors. The end product was denied a theatrical release in the U.S. and ended up splintered into numerous versions censored for different markets. Writer Brad Stevens has compiled a detailed list of deletions, readable at Senses of Cinema. It appears that all of the censored material has been reinstated in Severin’s deluxe 4K release — it’s the uncut 130 minute Spanish original.

A synopsis of Perdita Durango reads like a rap sheet of elements unacceptable in mainstream movies. Prostitute Perdita Durango (Rosie Perez) and bank robber – fake Santeria/Palo Mayombe guru Romero (Javier Bardem) meet and form a match made in Hell. Romero’s forbidden faux-religious rites include chopping up bodies snatched from the grave. He robs a U.S. bank with his crony Shorty Dee (Santiago Segura) and causes trouble by refusing to share the loot with the gangster Catalina (Demián Bichir). Perdita and Romero decide that a great idea would be a living human sacrifice for one of his well-paid performances, to which end they kidnap a pair of virginal American teens, Duane and Estelle (Harley Cross and Aimee Graham). They amuse themselves by raping and terrorizing the kids while trying to decide which one to kill.

Through his cousin Reggie (Carlos Bardem), Romero contracts with the perverted crime lord Santos (Don Stroud) to smuggle a truckload of contraband human fetuses into the U.S.. Events force Romero and Perdita to take their captives with them on the mission, which predictably becomes a bloodbath. Catalina and Santos each retaliate by sending killers, and Aimee’s father is also on their trail. But the man most likely to catch them is Dumas (James Gandolfini), a federal cop dedicated to putting Romero out of business.

Perdita Durango is the best-made film of its kind I’ve seen. David Lynch’s Wild at Heart just seems like hysterical nonsense; Álex de Iglesia adds enough cinematic polish to make his picture watchable. The content is as extreme as crime-sex pictures can get without being hardcore; the talented Rosie Perez must have gotten involved to prove that she’s ready for anything. A radical role might make sense for an actor that has broken through yet not become a front-rank star; Perez’s excellent performance in Peter Weir’s Fearless didn’t open up new opportunities. She appears to model some of her performance after Tura Satana in Russ Meyer’s Faster, Pussycat! Kill! Kill!, aided by similar costuming and the director’s stylish angles. ↑

Javier Bardem made his name in edgy material, in films by Bigas Luna, Pedro Almodóvar, Vicente Aranda. Aided by a stylish wild haircut, the crazed Romero radiates a violent instability that makes Nicholas Cage look like a total pretender. Taboo acts and heinous crimes are everyday activities for Romero yet we’re supposed to find him attractive. He has a quirky-cute affinity for The Tijuana Brass. Romero has no conscience when killing yet expresses deep sentiment for his idealized family back home. How Romero keeps his close friends is a mystery, considering the way he betrays most of them.

“These aren’t the contraband human fetuses we’re looking for. Move on, please.”

Also a mystery is how the extra-notorious felon and murderer can crisscross the border so easily. The film suggests that, despite Romero’s fake witch-doctor act, his religious magic grants him a real Obi-wan -ish power to cloud men’s minds. At one point Romero displays his magic beads over a blanket covering some contraband; the border guard sees it and gives him a pass. We aren’t shown how the semi-truck laden with human fetuses gets through the border check. Despite leaving a highway littered with corpses and other evidence  Romero and Perdita drive it straight to Las Vegas without a hitch. 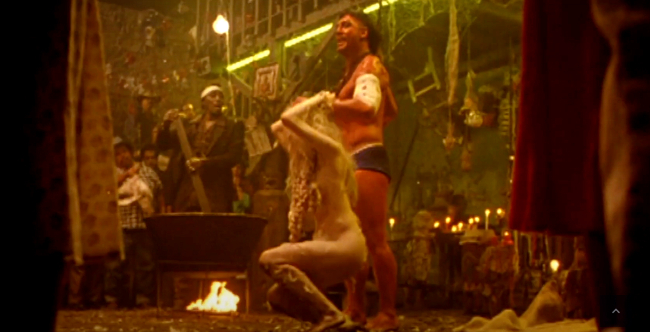 Director Iglesia keeps things loud, rude and colorful. Javier Bardem’s over-the-top Romero drenches himself in blood, dismembers a corpse and spits blood on his paying customers. Iglesia’s action scenes are a cut above similar material, delivering jolts to jaded action fans. The show invents an alternate reality in which life is as cheap as dirt and morality is a cruel illusion. Our outlaw lovers proclaim that the only value in existence is to f___ and kill.

The censor-bait elements described by Brad Stevens are clearly intended to court outrage, toying with conservative fantasies that science is harvesting unborn human tissue for atrocious research. The fetuses are stored in glass bottles, as if the semi-truck were a Cabinet of Curiosities; we’re told that they’re to be used to make cosmetics. Elsewhere in the uncut version it is suggested that the drug lord Santos has just forced a small girl, who is crying, to engage with him in a sex act. That kind of content didn’t exactly have U.S. companies competing for distribution rights.

As ugly as Iglesia’s film is, it feels like a breath of honesty compared to a movie with similar content, Oliver Stone’s Natural Born Killers.  Stone’s tale of nasty but glamorous serial killers is loaded with a general galloping pretension, screaming that ‘America is Evil’ while adding fuel to the fire. Perdita Durango skips the posturing and lectures, and offers a straight sensational thrill experience. Do you prefer your subversive cheap thrills with or without hyposcrisy?

At this time Javier Bardem was mostly unknown in the U.S.; his Anton Chigurgh in No Country for Old Men was still ten years away. The actors playing the teen abductees are also strong; it’s weird the way the show gets away with framing their ordeal as a ‘growing experience.’ James Gandolfini was still climbing the ropes of character parts, and shines as the dogged detective who keeps getting hit by cars. I think I knew him at this time for his winning supporting role in Get Shorty. Several actors down the cast list have interesting connections: Don Stroud, director Alex Cox, and Demián Bichir, later of Che and A Better Life. Screamin’ Jay Hawkins is Romero’s partner in religio-conman crime.

Several variously censored moments in Perdita Durango involve film clips seen on TV screens. In addition to some shots from a pornographic Japanese anime, we’re given the opening of TV’s The Mary Tyler Moore Show complete with its theme song. Cut for several versions of the film were ingeniously- integrated clips from Robert Aldrich’s 1954 western Vera Cruz. Romero tells Perdita that he identifies with Burt Lancaster’s toothy, unrepentantly amoral mercenary in Vera Cruz, and we see a clip or two.  At the finale a clever CGI effect ‘invades the space’ of the classic film, transforming the mortally wounded Lancaster into Javier Bardem. The arresting replacement is almost as good as the Leonardo DiCaprio / Steve McQueen substitution in Once Upon at Time in Hollywood.

An earlier flashback scene depicts Romero as a small child marveling at a screening of Vera Cruz. The formation of Romero’s fixation on Lancaster parallels a key episode in Perry Henzell’s 1972 The Harder They Come  in which Jimmy Cliff’s Reggae singer is inspired to become a notorious outlaw by watching a screening of the violent Italo western Django.

Some of the transgressive situations feel fairly original and others do not, but overall Perdita Durango can be recommended to fans seeking rough thrills to top those offered by David Lynch and Quentin Tarantino. Broadly speaking, Lynch favors surreal dream visions, and Tarantino favors elaborate dialogue scenes. In this show Álex de Iglesia augments the kinky stylishness we associate with Pedro Almodóvar, with his own brand of excess. A poetic prologue places Perdita face to face with a stunning Leopard. In a violent gun battle on a highway, one gunman is run over — slowly crushed — by a large truck.  Not long after that, a lawman (a deadpan Alex Cox) picks up a fetus that has spilled onto the roadway, telling a subordinate: “See that this gets a proper burial.” Dark dreams indeed.

Severin Films’ 4K Ultra HD + Blu-ray of Perdita Durango 4K clears away twenty years of apologies for censor cuts, along with DVD releases erroneously billed as ‘uncut.’ The IMDB is missing some information on the film, but even it lists seven different versions. A South Korean cut lost a full 35 minutes. Here in the states, the show sat on the shelf for two years before becoming a straight-to-video release, shorn by fifteen minutes.

The Ultra HD presentation convinces us that Iglesia’s shock show would have been quite an experience in a theater. The image really pops, right from the shot of the jungle cat nose-to-nose with Rosie Perez. One audio track features original English and subtitled Spanish dialogue, and a second is dubbed all-Spanish. Both choices are encoded in 5.1 surround.

The Ultra HD disc in the two-disc set is accompanied only by a trailer. The more extensive extras are on the second Blu-ray disc. In Severin’s excellent interviews we hear individually from the director, writer, composer and cameraman. Director Iglesias thinks that Sam Peckinpah would have dug his movie. The behind-the-scenes clips we see convince us that the shoot must have been a wild experience as well.

An overall critical appraisal is offered by Dr. Rebekah McKendry. Another featurette discusses cult religions in the shadow of the drug cartels, stressing that Romero’s atrocious rituals are all invented, and grossly exaggerate respectable practices of real religions.