Bille August’s 1987 award winner is yet another full cinema meal, a deeply satisfying drama about working conditions among Scandinavian immigrants back when being poor was a life sentence. Max von Sydow’s performance is stunning, as an aging stock tender forced to begin again as a veritable serf. He and his good son Pelle are surrounded by little dramas dealing with injustices among the workers and servants, as well as between the landholders in the big farmhouse. 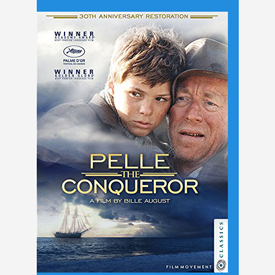 Sometimes the ‘quality’ movies we’re supposed to see turn out to be even better than advertised.

I don’t know if 1987’s Pelle the Conqueror is technically Swedish or Danish, but they credit it as the second of two-in-a-row Best Foreign Film Oscar wins for Denmark, after Gabriel Axel’s Babette’s Feast. Billie August’s firm direction and the solid acting by all concerned, especially Max Von Sydow, put this adaptation of the classic in classic status — it also won the Palme d’Or at Cannes. It was compared to Jan Troell’s The Emigrants but has more in common with Olmi’s
The Tree of Wooden Clogs, with a tiny bit of Bertolucci’s 1900 thrown in for good measure.

The saga encompasses four full novels, and this film takes in only the first, Boyhood, published in 1906. Its interest would seem more acute now, with the heightened awareness of the perils of immigration. In the middle of the 19th century, aging widower Lasse Karlsson (Max Von Sydow) and his young son Pelle (Pelle Hvenegaard) emigrate from Sweden to Denmark for economic reasons — Danish farmers are in need of cheap labor. Turned down by most employers over his age, Lasse is hired by the Kongstrup Farm, a large concern where they will be in charge of the dairy cattle. As foreigners speaking Swedish they’re harassed and humiliated, especially by the boss and the youthful foreman trainee. The farm help are poorly fed for their labor, and live in miserable hovels. They do get a front-row seat to witness the problems of the owners. Mr. Kongstrup (Axel Strobye) torments his alcoholic wife (Astrid Villaume) and has fathered several bastards, one of which is Rud (Troels Asmussen), an awkward boy who helps Pelle learn the ropes. Other stories emerge. Pelle witnesses the tragic forbidden romance between poor Anna (Kristina Tornqvist) and the son of another farmer. When Mrs. Kongstrup’s niece Miss Sine (Sofie Grabol) comes to live at the big house, she comes within seduction range of the cruel Mr.Kongstrup. Another worker, Erik (Bjorn Granath) loudly complains and defies the owners, and is frequently punished. Realizing that they’ll get nowhere on the farm, Lasse responds when a local woman, Mrs. Olsen (Karen Wegener) invites him to become her lover. Her sailor husband is long overdue, and not expected to return; the hope is that Lasse and Pelle could have a better life with her. When gossip of the relationship gets out, the schoolboys make life hell for poor Pelle. There seems no relief from the overall oppression. 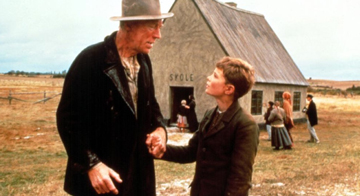 Pelle the Conqueror is a long feature, but is nothing compared to the ten- and twenty- hour miniseries’ that viewers now engorge on; its 2.5 hours unfold an extremely satisfying drama with several strong, emotional jolts. Most of the story is concerned with Lasse and Pelle’s struggle against hardship and humiliation, so much so that when an amusing scene comes along, such as Lasse’s hot date with the no-longer-a-spring-chicken Mrs. Olsen, we want to clap for the sheer novelty of it all.

Max von Sydow leads with his credible, moving characterization. Lasse has a good spirit but isn’t overly clever, and is well aware that he hasn’t got unlimited energy. He and Pelle must live in a corner of the cow barn, covered by flies. Although Lasse puts up a strong verbal front, given his age and the power levied against him, he cannot help but disappoint his son. When the foreman trainee strips and whips Pelle just to assert his authority, Lasse hasn’t the courage to follow through on his promise to exact retribution. He knows, and the bosses know, that the two of them would just be thrown out to starve. The big boss holds that same threat against all the workers, who must live in conditions well below the norm but can do nothing about it. Denmark is not a warm country, yet the working children don’t even have shoes to wear. The rebellious Erik must submit when the bosses serve them the same cheap meal of herring every day. This is the same even at Christmas, when the family in the house feasts. 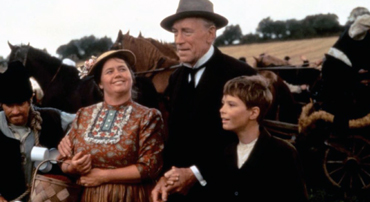 The women suffer the most in this awful patriarchy. The gentle Anna gets the worst of it when she and her forbidden lover insist on sneaking out together. What happens to her is as cruel as anything in Roman Polanski’s Tess. A simple warning could have spared the cousin Miss Sine from the rapacious Mr. Kongstrup, but that subplot has a satisfyingly violent and appropriate finish. Happy endings are hard to come by for everybody. Lasse’s plan for an easier life through marriage goes up in smoke. Pelle witnesses the heartless fate of the good man Erik. The terrible family relationships in the big house make a basically good person like Mrs. Konstrup do cruel things as well.

Billie August’s direction shows a fine feel for detail, and his direction can’t be faulted, even in the big emotional scenes. The humiliations are always there. When Mrs. Kongstrup brings in her beloved niece to meet the ‘help,’ poor Lasse is interrupted trying to relieve himself. Work is so pressing, the cow man must use the stalls for toilet, just like the animals he tends. 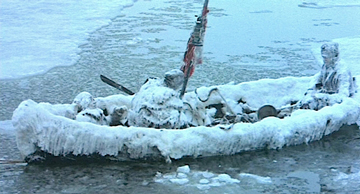 Filmed on a Danish island, Pelle the Conqueror also takes in the rich landscapes, summer breezes and frozen winters. The farm is near the sea, which figures in much of the drama. Pelle relieves the bullying of the local kids by throwing himself into freezing water, to prove how brave he is. Later, they force him onto an ice floe buy threatening to beat him to death with sticks. A dramatic ocean rescue becomes one major scene. In another the locals find a pair of men in a rowboat, frozen solid sitting up, covered with icicles. The movie is not at all exploitative, but there are a few scenes of nudity, and an appallingly unblinking scene showing the aftermath of an unwanted pregnancy.

The original author’s books stressed the social injustice of the labor situation. The succeeding volumes saw Pelle leaving the farm, growing up and becoming part of the struggle for labor rights. The event that makes Pelle decide not to become a new foreman trainee, and leave (at perhaps age 13!) is the sight of an enfeebled worker being quietly smuggled off the farm, probably to be placed in the 1850 Danish equivalent of an asylum / snake pit. It’s very much like a traumatic scene in Orwell’s Animal Farm.

Film Movement Classics’ Blu-ray of Pelle the Conqueror is a beautifully transferred presentation of this handsome, impressive story, like the disc label’s earlier head-turner, Marleen Gorris’ Holland- set rural melodrama Antonia’s Line. The healthy widescreen scan gives us rich colors: when the farm looks cold and damp, we can feel it. Blu-ray is finally catching up with fine presentations of foreign films once given only sub-par attention on DVD.

The well-known critic and authority Peter Cowie provides a full audio commentary. He covers the facts of the filming, the show’s literary background, and the personalities we see. With so much time to cover, his speeches can become sparse, even sometimes just telling us what is happening on screen. I think the best solution for a long film like this, is to use a programmed commentary that only covers certain scenes. If Cowie spoke for only an hour, this would be a much more listenable track.

Promo trailers for Film Movement attractions are the only other extra. Antonia’s Line’s trailer is among them. 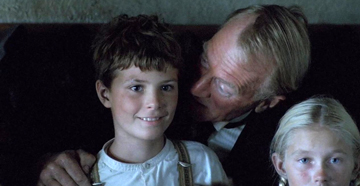