It’s back and better than ever — the makers of Pee-Wee’s Playhouse capped their Saturday morning show with a Christmas Special to end all Christmas Specials. All the show’s regular characters, special treats and creative extravagances are enhanced with a tall stack of celebrity guests, performers and walk-ons — it’s a 1988 time capsule. 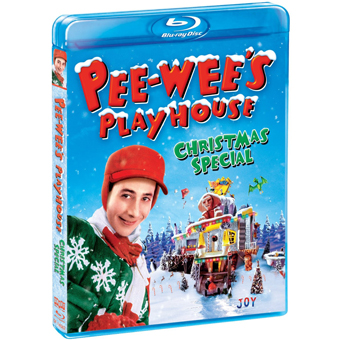 This Shout! Factory disc came out a full two months ago, but I’m reviewing it now as it’s perfect timing to grab it for Christmas holiday viewing. Before being sidelined by a scandal or two, Paul Reubens carved out a unique entertainment niche with his comedy creation Pee-Wee Herman. Fully grown but with the mentality of a mischievous ten-year-old from some earlier era of retro weirdness, Pee-Wee is loud, funny and openly infantile — in a charming way. He celebrates the retro dementia of ancient fare like The Howdy Doody Show. He must be seen to be understood. 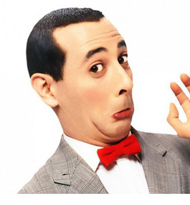 Actually, I’ll bet a lot of parents didn’t understand Pee-Wee when Pee-Wee’s Playhouse debuted on CBS in 1986. The star of this crazy celebration of ’50s-style kiddie shows surely freaked out some parents worried that their kids might be infected with Pee-Wee’s campy attitude – he’s effusively emotional, feminine, maybe even…. (shhh…!) gay.  Pee-Wee’s toyland playhouse is overrun with goofy, fruity characters like the magic genie named Jambi, who makes me smile because he reminds me of the two great male nurses that lived downstairs when I was just married. There are a bunch of non-human characters, like Chairry and “Mr. Window.” When Pee-Wee prances about greeting them all, the show becomes a visit to LSD Romper Room.

The beautifully produced half-hours popped with color, music, and friendly faces like Reba the Mail lady (S. Epathat Mekerson) and the King of Cartoons, played by Blacula himself, William H. Marshall. With small kids in the house, it was like Mister Rogers through a kaleidoscope. This was when my girl and two boys were hip to things like The Tick and the original Teenage Mutant Ninja Turtles. Our favorite part of Pee-Wee’s menu of fun was Penny, the clay animated marvel built around recordings of actual little girls, in the course of the show 35 of them. The most super-cool moment of the ’80s was in Penny’s segment — a duck character shows up and does an Elvis parody: “WELL I HEAR YOU’RE A DUCK / I’M A DUCK TOO / LET’S GET TOGETHER AND DUCK A FEW!” Nirvana. I can still see my then- 9-year-old rocking out to that. 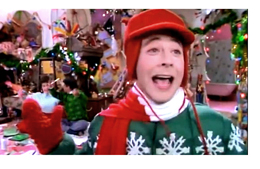 The fun show is of course available on disc, but a great way to sample Pee-Wee without jumping too deep into nostalgia specifics is Pee-Wee’s Playhouse Christmas Special. We expect the usual thrown-together variety show, but the creatives behind Playhouse clearly wanted to make something that would last. The special adds new and more elaborate designs, all simple, creative and colorful. The Playroom set is expanded and several more sets arranged, such as an ice skating ‘exterior.’ The show is a blast from one end to the other, with scores of guest stars making appearances big and small.

The Christmas Special plays like the ultimate show we used to see with Dean Martin or Dinah Shore, only twice as hip. The jolly Marine Corps choir up front is a fake — it’s really from UCLA. The creatives worked out choreography for them on the spot, and it’s an instant class-act musical number.

The guest list is divided between full-on visits and amusing cameos. Zsa Zsa Gabor barely says ‘Merry Christmas’ and moves on. Little Richard is in for a bunch of gags on the ice rink. Asked to give a big yell by the script, Richard inquired as to whether he should yell like a white woman or a black woman. We barely get a blip of Oprah Winfrey. Dinah Shore earns special praise, allowing herself to be made the butt of a running gag. She sings a song for Pee-Wee over a TV connection, and ends up being ignored as Pee-Wee’s attention is directed elsewhere. 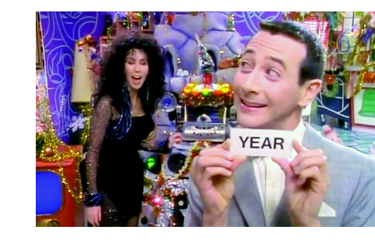 Annette Funicello and Frankie Avalon serve as secondary hosts, like a prom king and queen. They play games and make decorations while sitting or lying down. Nervous and bossy, Pee-Wee keeps giving them more work to do. We were told that Annette’s health wasn’t good, so it’s actually an emotional thing to see the show go out of its way to give her this cheery showcase. And heck, Avalon’s a great sport too.

Of the celebrities listed above, Cher and Grace Jones get fairly substantial bits, even though Cher’s appearance is brief because she was rushing between obligations. All those years of variety show work pay off, as she looks as fresh as a daisy. The Del Rubio Triplets are in for bizarro appeal, to remind us that the Playhouse is just down the street from alternative lifestyle freakout world. Their traditional carol is actually O.K., as is K.D. Laing’s rock ‘n’ roll Xmas song.

The special handles the PC content with taste and discretion. We see depictions of a traditional Spanish Feliz Navidad. A clever Hanukkah alternative reveals that Pee-Wee’s animated dinosaurs are Jewish. Being one million years B.C., that makes perfect sense to me.

Like all good Christmas specials, Pee-Wee’s works its way to a sentimental musical finish around a giant tree, with the superior art direction holding out to the very end. It’s great background fun for the holiday, it’s kid-safe, and any number of moments are fall-down funny. Plus I’ll be able to remind my grown children how much we loved Pee-Wee.

Shout Factory’s Blu-ray of Pee-Wee’s Playhouse Christmas Special is a fine HD rendering of a show that I’m sure had to be produced in Standard def NTSC. Actually, the package says NTSC, which is a little confusing. Whatever they’ve done to boost it to Blu-ray, it looks great, not soft or color challenged. The mono audio is very strong.

Two audio commentaries help us appreciate the care with which the shows were made. Track one has the star, writer and producer Paul Reubens, co-writer John Paragon and performer, animation producer Prudence Fenton and actress Lynne Marie Stewart, who plays Miss Yvonne, the lady always dressed in a big poofy retro ball gown. We find out that Lynne Marie played ‘Bobbie’ in American Grafitti. The second commentary gives us the puppeteers: Kevin Carlson, Ric Heitzman, George McGrath, Alison Mork, John Paragon and Wayne White. Between the two tracks, we learn lots of detail about every segment, how the costumes and puppets work, etc. As most of the creatives weren’t industry veterans, they were flattered that so many celebrities signed on, and then were so happy to be involved.

I have a fun personal Pee-Wee’s Playhouse Christmas Special story. When I edited promos for it back at MGM Home Video in the middle ’90s, we were given a tape prepared for video store sample use. Every few minutes a superimposed title jumped up, saying “Property of MGM Home Video, All Rights Reserved”, or something to that effect. The final scene has the little delinquent puppet ‘Randy’ caught sabotaging the Christmas tree. Pee-Wee is righteously indignant, and of course borderline hysterical:

“Randy, what are you trying to do, ruin our whole Christmas?!”

Randy sasses back in his nasty voice:

At that very moment, the ‘Property of MGM Home Video” super fades up.