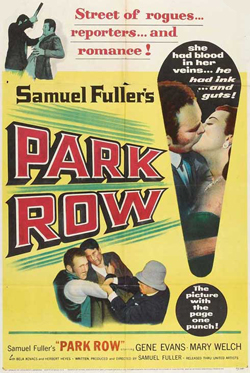 A gritty newspaper saga about two battling tabloids shot like one of Fuller’s war movies, Park Row was one from the heart. Fuller began his career as a crime reporter at the ripe old age of 17 and claimed this period drama as his favorite of his films. Ignoring his pal Darryl Zanuck’s suggestion that he make it a star-laden color musical, Fuller financed his ink-stained morality play himself and lost his shirt.  Despite its shoestring budget the period flavor is so strong you can almost smell the newsprint. Fuller regular Gene Evans stars in his greatest role.