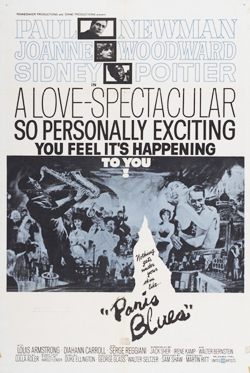 Martin Ritt’s film about struggling jazz musicians in Paris circa 1961 comes with quite a pedigree, including Duke Ellington’s soundtrack, Louis Armstrong in a prominent role, and evocative black and white cinematography by the great Christian Matras (Jean Renoir’s La Grand Illusion and Max Ophüls’s The Earrings of Madame De…). Not to mention two superb American actors in their prime, Sidney Poitier and Paul Newman, each romantically entangled with two equally fine actresses, Joanne Woodward and Diahann Carroll. The screenplay initially paired Newman with Carroll but United Artists was having none of that.