Hipster film folk love a good black comedy, and one that doesn’t hit too close to home can become a big hit. Bong Joon-ho has been making smart, clever movies for years, and this intense satire hit pay dirt, commercially. Neon played their Oscar season cards beautifully as well, with the personable director seemingly omnipresent at festivals and on NPR. The film itself? I find it wickedly clever, yet fundamentally humanist — it’s not mean-spirited. 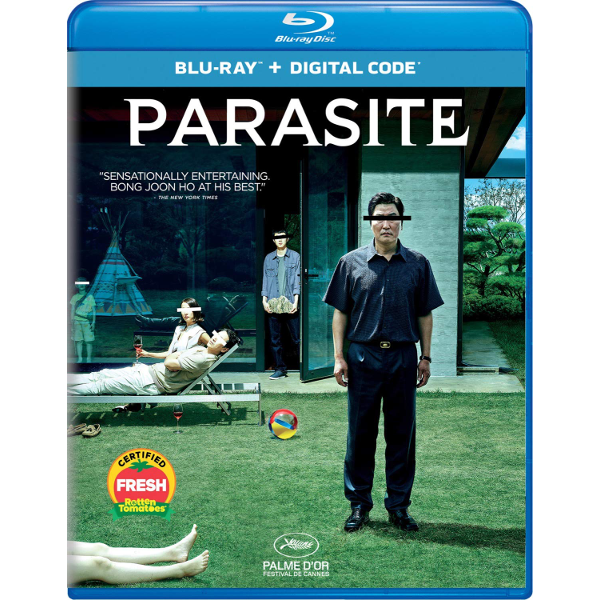 Bong Joon-ho’s South Korean movies have been piercing the American market for years now, bringing a high level of intelligence to specialized genre fantasies. Even his monster movie The Host features a deeply-rooted social comment. A crazy fish-monster drives a good part of Seoul from their homes, and the family on view must spend time in a poorly-organized government shelter. The same thing happens in Bong’s brilliant black new comedy Parasite: no fantastic train or weird monster, just the nitty gritty of good old-fashioned class warfare.

Talk about a pleasingly apt upset on Oscars night. A funny thing happened on the way to the Kodak theater this year: the Academy sifted through the nominees and for once voted for the most original feature in the stack. Yes, the show is in the Korean language, and one must read subtitles. Bong Joon-ho is on record with a great quote about subtitle allergies in the U.S.: unlike a certain wall in the news, nobody should be stopped by a barrier that’s just an inch tall. Several friends told me that Parasite is brilliant, with no caveats or disclaimers. My observations here shouldn’t spoil the movie, which is much more than a typical comedic satire. Its truths are indeed funny, often wickedly so. The truth hurts, and with every story development we can sense a highly intelligent social criticism at work.

If the movie had a secondary title, it might be Asymmetrical Social Warfare. The downtrodden have-not Kim family doesn’t want a revolution, they just want a place in the economic system — a goal they’ve decided is un-attainable by honest means. They long ago abandoned the fantasy that the Shavian ‘undeserving poor’ can pull itself up by its bootstraps, and instead are prepared to lie, deceive, scrape & crawl their way to a place of security. Yes, it’s open season on the wealthy Parks — the gullible, neurotic new techno-rich society family.

The unemployed Kims don’t mean to raise bloody hell. The Kims are a family of four adults. The mother was once an athletic champion. Things have deteriorated to the point that they’re folding boxes for a pizza business, and even that boss is gravely dissatisfied with their work. But when an opportunity comes for the son Ki-woo (Choi Woo Shik) to home-tutor the daughter of the wealthy IT entrepreneur Mr. Park (Lee Sun Kyun), the Kim family uses lies and deception to insinuate itself into paying jobs with their new host family. The wealthy Parks will never know what hit them. That’s literally all the non-spoiler storyline that’s fit to print. It only remains to praise Bong Joon-ho’s brilliant writing, assured direction and the skill of his cast. It’s a South Korean movie, but the situations presented translate to practically anywhere. There couldn’t be more contrast in how the story’s two families live; Kurosawa’s title High and Low would have been a good fit, too. The have-not Kims live in a basement apartment overrun by roaches. One must climb some steps almost to ceiling level to reach the toilet, a bit of plumbing insanity to keep it from overflowing. A big rain eventually makes that happen anyway. As for the wealthy Park family, their designer house was purchased direct from the famous architect that built it. It’s all concrete, glass and polished wood, with a broad lawn out back. The new owners were never told about other architectural details, that figure strongly in the plot later on.

Up in the swank house on the hill, the ‘perfect’ Parks see themselves as vulnerable because they have reputations to protect and kids that must succeed in life. The nervous, status-conscious Mrs. Park (Cho Yeo Jeong) will do anything to give her teenage daughter and young son an advantage in school. The Kims exploit these bourgeois fears to the hilt, which of course provides hilarious fodder for Parasite’s black comedy. The ever-cautious Mrs. Park is easily manipulated. Ki-woo and his sister Ki-jung (Park So Dam) sell themselves as elite, exclusive tutors, which only makes Mrs. Park more eager to hire them.

The term Black Comedy implies that even the funny content has a dark aspect. If the show were just a simple farce, the two families would be belligerent but silly. Each camp would accuse the other of being parasites, but a benign conclusion would eventually arrive, perhaps with the poor boy marrying the rich girl, or Mr. Park discovering that Mr. Kim’s street-smart skills are ideal for closing a big deal back at the office. This is instead the kind of twisted tale that opens a vein of uncomfortable truth and lets the hilarity bleed out. Funny ha-ha becomes funny-tragic. As the petty sins of the bourgeois were prime Luis Buñuel material, the surrealist genius would surely approve of Bong Joon-ho’s approach. As in the films of the Spanish rebel, Bong stays true to his dark vision. Once the comic knife is in, he’s not afraid to give it a twist.

The basic misanthrope Buñuel posits an absurd and cruel worldview. Nobody is spared his acid disdain, and his children are as evil as adults. Bong’s worldview is far more humanist. His kids are innocent, even when spoiled, and his adults are forgiven as well. They’re just playing the game as best they can, with the cards they’ve been dealt.

Observant, flexible and highly intelligent, Bong Joon-ho is a top-rank writer-director. His movie has zero fat in story or tone. It neither rushes nor drags, and every scene advances the premise and introduces new elements and new humor. We laugh at the gullibility of the Parks and the ruthless pragmatism of the Kims — each seems born to exploit the other. The poor Kim family considers their dishonest depredations as basic survival skills. The rich Parks are also fundamentally dishonest. They hide their true motivations even when they hire and fire people.

Although events do get out of hand, nothing in Parasite is outrageously impossible. The contrast in living conditions is not at all exaggerated, and the cruel equation of ‘economically asymmetric’ employment was never so clearly stated. The boss Mr. Park is friendly to Mr. Kim only as long as he’s getting full cooperation. The moment Mr. Kim complains, he’s reminded that he’s being paid. The essential power discrepancy is always there, no matter the situation. When the Parks decide to hold an impromptu lawn party, it’s assumed that his employees will cooperate, even on their day off. The boss’s petty convenience trumps any rights the employee might think he has.

None of Bong Joon-ho’s narrative surprises is arbitrary. The story events teach a hard lesson about the class divide: underdogs will do anything to not lose the paltry advantages their conniving has won, especially when defending their turf against competing underdogs. If they must, a have-not will live like an insect, sneaking out at night to forage for food.

Why is the underclass so resentful and insolent?  Parasite offers an insight or two. When things go wrong, Mr. Kim says he never makes plans. Because he is basically powerless, his plans almost always fail anyway. But if he makes no plan, he can claim to bear no responsibility for what might happen, no matter who gets hurt. Why carry the burden of responsibility, if you have no control over outcomes?   I doubt that the Parks, or a judge in a criminal court, would agree with Mr. Kim’s existential rationalization.

Bong Joon-ho demonstrates the dynamic of this social conflict without ever having to literally spell it out. He respects his serio-comic characters. All are lovable, or at least understandable, on their own terms. The Park daughter and Kim son are indeed strongly attracted to each other. The Kim family are wanting in morals, but they genuinely support each other, and stick together in good humor. The well-heeled Mr. and Mrs. Park are spoiled elites, but they definitely mean well and believe in fair play. They don’t realize that they use their economic advantage as a battering ram, reducing their servants to functionaries with no rights.

This South Korean production has ‘gone international’ more successfully than any film in the nation’s history. Yet it doesn’t lose track of its South Korean identity. Mr. Kim makes a joke (I think) about not knowing the roads North of the 38th parallel. The North Korean enemy is surely a source of primal fear for the South, but in one really strange moment, a traumatized character verbally identifies with that same enemy. The exact meaning of those references will have to be explained to me — I don’t claim to be an expert on South Korean cinema. But the wickedly satiric through-line of Parasite is crystal clear: the movie is a black comedy about social crimes committed across the economic divide. It’s fundamentally twisted and really funny. I saw it first on Blu-ray, and laughed out loud more than once. Universal / Neon’s Blu-ray of Parasite is the expected flawless digital presentation of this popular come-from-behind favorite with six Oscar nominations, and four big wins. The art direction makes the most of the contrast between the two dwellings in the show, the yellowed textures of broken tiles in the Kim’s basement apartment clashing with the modernist space and light of the Parks’ designer house on the hill. Nestled behind a concrete security barrier, the Park compound is locked away from the outside world. The Kims’ only view is of an alley that drunks use as a toilet.

The one extra is a lively post-screening Q&A session with Bong Joon-ho. It’s professionally taped and lasts about twenty minutes. I was relieved to hear the host immediately discussing Parasite in the same way I was — I haven’t heard this much talk about architectural / psychological space since Michael Powell’s Peeping Tom.

Criterion has already announced a future special edition of Parasite, as well as the director’s Memories of Murder. They have access to Universal product, and the charming Bong Joon-ho has already proven himself an expert spokesman for his fine pictures. His personal involvement in the publicity push perfectly positioned his film for Academy voters. Many U.K. movies have won the best picture Oscar, but this is the first year that a film in a foreign language has taken that honor, and won for best foreign film as well. The show is not an underdog indie in the standard sense, so its wins can’t be called some kind of industry upset. But it certainly shows how the landscape for distribution is changing the way people see movies.