For directing skill and sensual sophistication this psychologically intense murder tale equals or betters the most sophisticated American noirs. Julien Duvivier gives us Michel Simon as Monsieur Hire, a strange man loathed by his neighbors. Entranced by the woman he spies through his bedroom window, Hire doesn’t realize that she’s helping to frame him for murder, and then set him out like bait for a vengeful mob. The restored French classic is a beauty in every respect; the extras include a highly educational, must-see discussion of movie subtitling, by Bruce Goldstein. 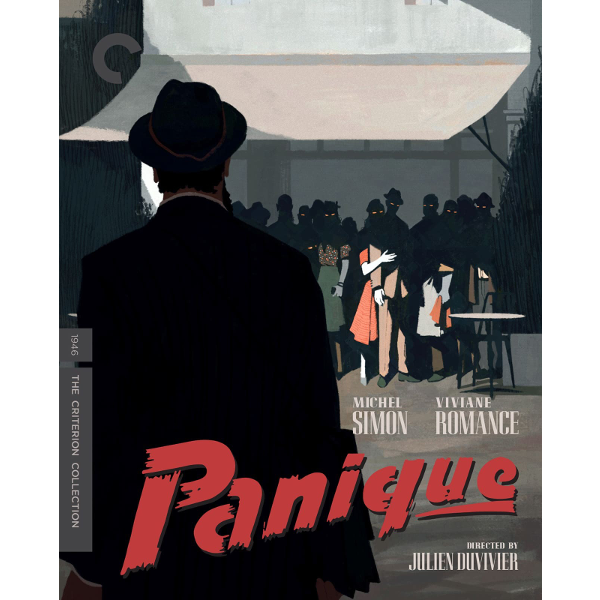 I’ve heard for years that Julien Duvivier’s Panique was ‘the film to see’ of postwar French cinema. Until DVD came along we were fed the twenty or so ‘usual suspect’ French classics by Renoir and a few others, even in film school. About ten years ago critic and filmmaker David Cairns jump-started his blog Shadowplay by sending around a disc of Duvivier’s impressive La fin du jour, sparking my interest in the director. Besides taking a look at Pepe le Moko again, I caught Duvivier’s weird Foreign Legion saga La bandera on TCM. The 1934 movie has a bit of the vibe of Apocalypse Now. A minor detail from La bandera really shook me up: a crazy outcast soldier has so removed himself from the flow of normal life, that he has had a full skull mask tattooed over his entire face. It’s scarier than combat War Paint; he’s almost as disturbing as the Phantom of the Opera.

That skull-face shocked me into an immediate respect for Duvivier as a filmmaker capable of extreme statements. I’ve seen and liked his American movies Tales of Manhattan and Flesh and Fantasy, but mainly remember their elegant images. I’m glad I waited for a restored print to see Panique, as it now seems his best show by far. The show is an unorthodox murder tale about unpleasant people, with a troubling main character victimized by a pair of schemers more ruthless than those written by James M. Cain. I at first thought, ‘ah, Duvivier has been influenced by trends he experienced in Hollywood, in pictures like Double Indemnity.’ But Panique’s themes reach beyond noir, in a number of different directions. 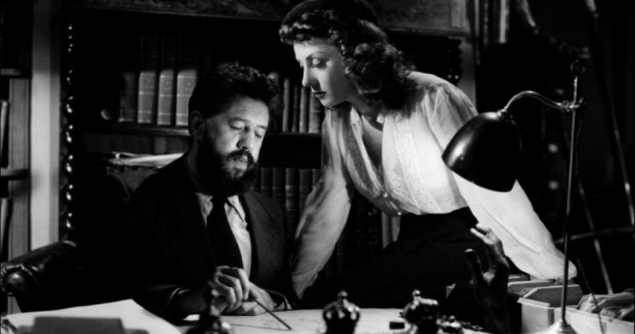 In a French town just outside Paris, Monsieur Hire (Michel Simon) lives a mostly solitary existence. He makes no effort to befriend his neighbors, who are petty and small-minded — an opinionated butcher, an imperious tax collector, a nosy prostitute. Several things happen almost simultaneously. A carnival comes to town, and the dead body of an older, respected lady is found in a ditch. Returning from prison, the beautiful Alice (Viviane Romance) takes up secretly with her former lover Alfred Chartier (Paul Bernard of Diabolique), a womanizing con man. Alice went to prison to cover for Alfred, who killed the old lady for her money; she eagerly helps her lover when it appears that Monsieur Hire knows something about the murder. Alice has already noted Hire peeping at her from his window across from her room; she begins a flirtation to learn his secrets. Hire he responds by making a full appeal for her love. Even the cold-blooded Alice is moved, but she and Albert press on with their mission to shift culpability to their patsy. To Albert’s delight, he finds that nobody likes Hire, and that his peculiar lifestyle is ripe for scapegoating.

Panique has a strong noir vein, with its vicious couple plotting to frame a man for murder. It also has strong roots in moody, fatalistic French Poetic Realism, something director Duvivier knew well before the war prompted him to leave for the safety of America. He brings his own brand of misanthropic fatalism to bear on the story — a misanthrope with highly personal reasons to detest humanity, Monsieur Hire is ironically brought down by his own blind, unquestioning love.

The show also expresses a grim social philosophy that expands on Fritz Lang’s ugly vigilante tale Fury and H.G. Clouzot’s condemnation of ‘decent’ people as No Damn Good in the notorious Le corbeau. The supposedly ordinary folk of Hire’s town need little prodding to become a lynch mob. We’re told that Georges Simenon’s original story was quite different; the adaptation by Duvivier and his writer Charles Spaak softens some character elements and sharply heightens others. Michel Simon’s Monsieur Hire is much more corrupted in the book. A 1989 remake by Patrice Leconte reportedly returns the story closer to Georges Simenon’s original outline.

The film is almost too rich to take in on just one viewing. Duvivier’s multi-layered direction constantly rewards the viewer with telling angles and subtle effects; the frequent camera moves make us feel part of the action. Filmed on a large, specially constructed town set covering several blocks, the show looks simultaneously realistic and confected. The interiors of the bar-salon, the hotel and various boarding house rooms contrast strongly with Hire’s place of business, a parlor where he sells illusions to gullible clients. In the section of the film where Alice plays up to Monsieur Hire, he takes her across a river to a stately but abandoned house which seems to represent the traditional, human background that Hire is hoping to recover.

Duvivier never allows a scene or a shot to contain just one visual or thematic element. Many compositions are arranged in depth, and the lighting often adds important shadows, highlights or reflections to scenes. The first meeting of Alice and Albert is marked by huge close-ups bathed in romantic soft light, that make their unsavory intentions all the more tawdry. Nicolas Hayer’s cinematography shows a range of effects, from the blatant blank sunlight under which a carnival crowd becomes a mob, to the complex lighting effects in rooms where people plot and scheme. When Monsieur Hire is effectively accused of witchcraft, it seems a logical outcome of the setting.

It’s easy to see why the movie was unpopular in France, and not initially counted as one of Duvivier’s best works: the fate of Monsieur Hire at the hands of a mob must have been an unwelcome, guilty reminder of the fate of countless French Jews just a couple of years before. The way Duvivier tells the story puts the notion of fatality right up front: the evil that men do will indeed catch up with them, but not before other innocents suffer unjustly. The bleak, black carnival-ride finish omits the actual fall of the axe, yet feels entirely satisfactory. The surprise realization of what Monsieur Hire knew, and could have proved all along, makes his character seem all the more complex, and tragic.

Top-billed Viviane Romance was reportedly a vain diva, yet she’s perfect to play Alice, an amoral monster who is both a fiend and a fool — critics have no trouble labeling her as a ‘bitch.’ Paul Bernard’s status as a smooth seducer and total rat is compounded by the odd choice of makeup — it’s easy to see that he’s wearing heavy eye shadow and lipstick, and not only in close-ups. I’m told that Michel Simon was slighted now and then for overacting, but his Monsieur Hire is underplayed throughout. Hire expresses disdain for his neighbors but we come to understand the depth of his disenchantment — he’s so negative on the human condition that he honestly isn’t concerned that a killer might escape punishment.

The moral/amoral/indifferent attitudes expressed in Panique would never fly under Hollywood’s Production Code, which did its best to make sure that moral-political problems were never more complex than simple bad vs. good.

Duvivier’s assessment of the public at large is of a system that promotes small-mindedness, a herd mentality and a compulsion to drive out those that don’t conform to the brute prejudices of the consensus. The crowd scenes bear this out, especially in the carnival fun-fair. The natural tendency to identify and attack outsiders is expressed in the impressive Dodgem bumper car scene — with the just the slightest nudge from Alfred, the whole community bombards the outsider Hire. The female wrestling spectacle is apparently a preferred attraction; Duvivier stages the performance to make the grappling women express the public need for a violent outlet. Individuals aren’t all that sick, but together they form a perverse mob.

By comparison, the vile characters in Clouzot’s more radical Le corbeau are particularized malcontents and miscreants, just evil in themselves. With its wider range of personalities, and the marvelously ambivalent Mr. Hire at its center, Panique feels more true to life. 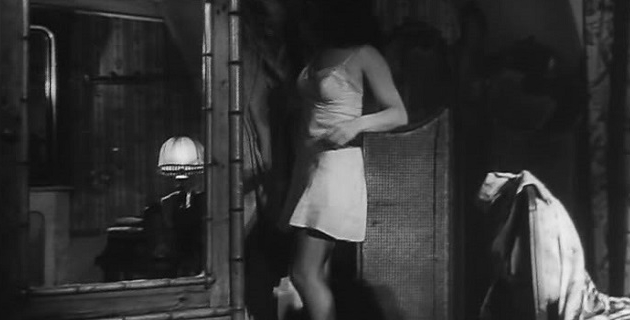 The Criterion Collection’s Blu-ray of Panique presents a handsome restoration of Julien Duvivier’s standout thriller. The images of Nicolas Hayer (Le corbeau, Le doulos) measure up well against America’s great film noir cinematographers. Hayer always keeps one toe in the realm of naturalism: he never concocts a strange image merely for effect. The audio is good, even if some of the music cues show a tiny bit of distortion — they may always have been so.

Disc producer Jason Altman covers all bases for a film by a director who was considered among the greats of French cinema, until the critics of the French New Wave won attention by tearing down the previous generation. Georges Simenon’s son Pierre gives a great talk about the author, addressing various criticisms and making a distinction between French artists that continued to work during the Occupation, and those that collaborated. Simenon fils ends with a great joke referencing Alfred Hitchcock.

Critics Guillemette Odicino and Eric Libiot take on the legacy of Julien Duvivier and make an enthusiastic case for Panique as his best film. They suggest that several of its scenes may have inspired Alfred Hitchcock, despite the literary basis for the examples they give.

Best of all is a fifteen- minute study of the subtitling of foreign movies by the great Bruce Goldstein, a very smart and funny man. Presenting No Orchids for Miss Blandish at the 2010 TCMfest, Goldstein had his audience laughing as much as any standup comedian. Subtitles turn out to be a fascinating subject, and the examples given of classic pictures show very clearly why new subs are almost always needed. The subtitles of European films from the ’40s and ’50s were almost always inaccurate or deceptive, omitting anything too racy. It’s a don’t-miss extra — I’d keep an eye on the Criterion website to see if it ends up being posted there.