Let’s get this out of the way right off the bat: Groundhog Day can never be touched. The “time loop” narrative conceit that brilliant Harold Ramis classic pioneered has been co-opted onscreen quite frequently over the past decade. It’s popped up in a horror franchise (the cheerfully re-watchable Blumhouse horror comedy confection Happy Death Day and its more science fiction-skewing sequel Happy Death Day 2 U), a terrific Tom Cruise-Doug Liman science fiction/action collaboration (Edge of Tomorrow, later re-branded on home video as Live Die Repeat: Edge of Tomorrow), and a Zoey Deutch romantic drama (Before I Fall). Netflix got into the act recently, too, with their Natasha Lyonne series Russian Doll, which was recently renewed for a second season.

Each of these stories lifts the core conceit of Groundhog Day, diluting that immortal movie’s uniqueness just a tad in the process: our hero finds themselves trapped, reliving the same day over and over again ad infinitum. As a consequence of this recent market influx of Groundhog Day successors, subsequent generations of film fans may sadly not appreciate just how special and wonderful and novel an idea the “time loop” notion was on first impact in 1993. That said, a lot of these flicks have proven that the idea has more legs than one may have initially anticipated.

Today marks the release of a fresh entry into this rapidly expanding subset of stories, the Andy Samberg-Cristin Milioti two-hander Palm Springs. The film, which started streaming today on Hulu, is a captivating romantic comedy (with a seasoning of sci-fi), the first in recent memory that is such a direct genre descendent of the ultimate time loop movie grandaddy. This viewer dove into the movie with lukewarm expectations, skeptical of the pliability of the genre to somehow be fertile enough for two funny and engaging entries between this and Groundhog Day.

To this viewer’s pleasant surprise, Palm Springs rocketed past that initial skepticism and found me eager to immediately embark on a time loop of my own… I watched the movie again almost immediately. Perhaps not unsurprisingly, the nuance of care that went into the film’s intricate storytelling rewards repeat viewing. It’s a welcome delight and distraction during a year where we could all use one.

Palm Springs drops us into the titular desert vacation destination 100 miles east of Los Angeles on the day of a wedding between Tala (Camila Mendes) and Abe (Tyler Hoechlin). As the evening wears on, Tala’s sister Sarah (Milioti), the maid of honor, finds herself intrigued by Nyles (Samberg), the free-spirited boyfriend of bridesmaid Misty (Meredith Hagner), doomed to cheat with the wedding officiant (Chris Pang) after the ceremony. During a passionate desert make out between Nyles and Sarah, Nyles is shot in the back with an arrow by fully camouflaged psycho Roy (J.K. Simmons) and darts off into the darkness. Roy gives chase, followed by a shocked Sarah. Eventually, she finds him in a mysterious cave, its chasms bathed in flickering red light. After walking towards the light, Sarah awakens to discover… that she has returned to the morning of the wedding!

She confronts Nyles by the hotel pool, and he quickly comes clean. They are trapped, in an endlessly repeating time loop, on the day of her sister’s wedding. The characters never make a reference to Groundhog Day, the movie from which this whole setup owes a massive narrative debt, which feels like the least they can do (at least Happy Death Day gives the time loop granddaddy a hat tip in its closing moments), but I suppose I’m picking at nits. Nyles eventually concedes that one night, when incredibly imbibed, he invited Roy into the cave. Now Roy occasionally pops up to torment and murder Nyles for trapping him in this looping day, too. Of course, Nyles can never die will trapped in this loop, he just wakes up on the morning of Tala’s wedding forever and ever.

The three characters take drastically different approaches to their chronological captivity. Sarah tries to grapple with the situation more pragmatically, whereas Nyles (and Roy, though he is more supplemental) appear to have surrendered to the void. The relationship between Nyles and Sarah deepens and grows, in a comic and endearing way that feels true to their fully realized characters. The duo begins to confront the reality that, even pre-time loop, their lives were stuck in a rut.

Of what happens next, I’ll say very little. I will concede that Nyles and Sarah get into a series of exploratory shenanigans both innocuous and more troubling, that there might or might not be a happily surreal Brachiosaurus herd cameo or two, and that uncomfortable truths about both characters will be discovered as one of them gets closer to determining a permanent route out of their time loop. The stakes feel real, the twists and betrayals feel intimate and genuinely motivated by the characters, and the core emotional developments don’t come across as contrived or phony.

Like any new time loop movie, especially the time loop romances, Palm Springs cannot help but operate under Groundhog Day‘s glorious shadow, and in that respect it suffers a little. The redemption of Phil Connors is one of the all-time great movie-watching experiences, though, so this reality is nothing to sneeze at. Tonally, the comedy here is much more in line with a more Millennial, crass brand of humor than the Boomer-produced Groundhog Day — but Palm Springs achieves this admirably. 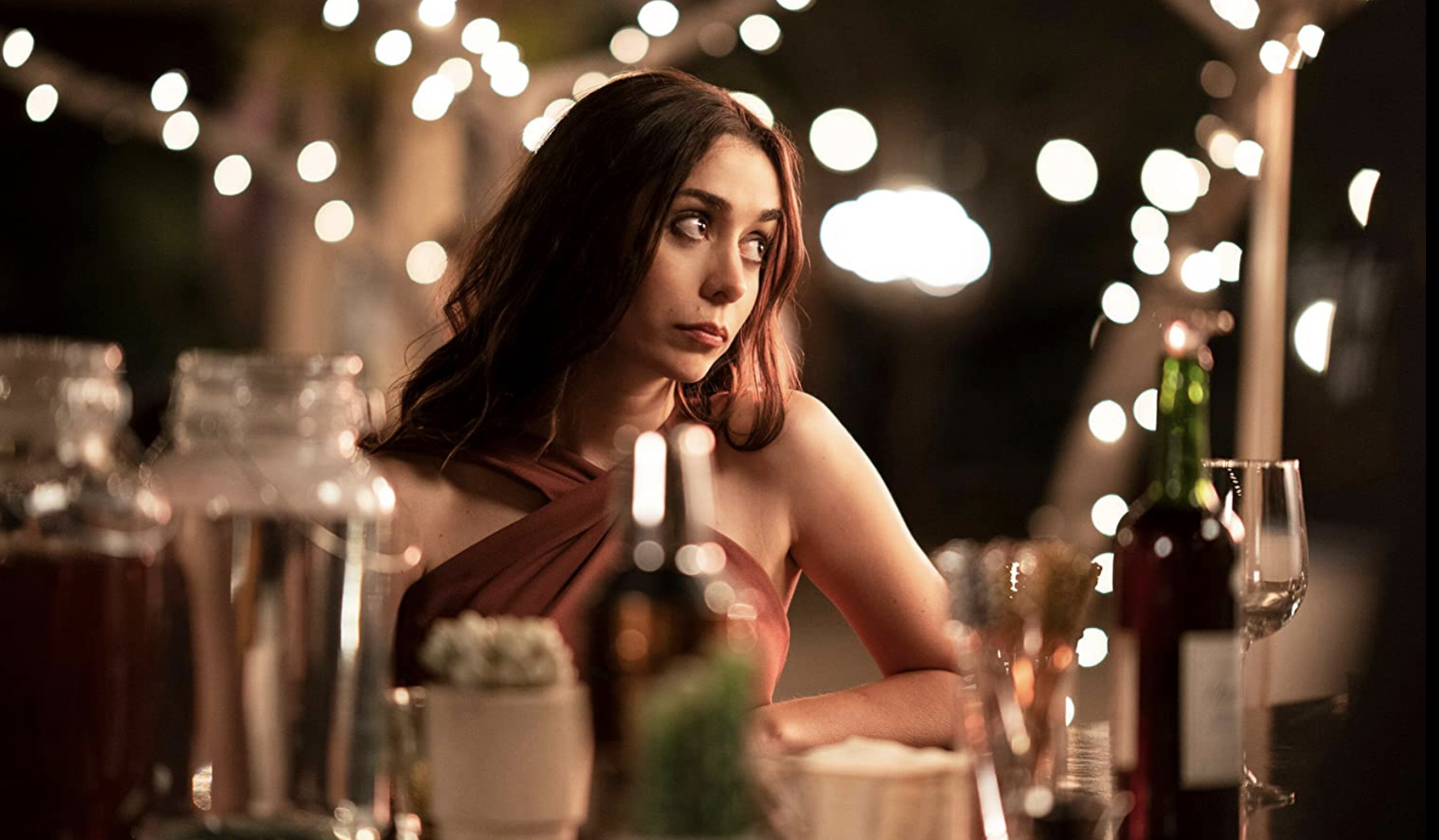 True to the genre, there is some philosophizing in the screenplay from Andy Siara (a writer on Lodge 49) about the meaning of existence and the nature of death, but like most of its predecessors, Palm Springs somehow deftly avoids feeling cloying or contrite packed with some philosophizing that is so well-written (by scribe ) that it feels genuine rather than cloying. It does not reach the grand meditative pseudo-Buddhist spiritual heights of Groundhog Day, but again, none of that movie’s successors do.

Directed by first-time helmer Max Barbakow, and produced by Samberg’s company The Lonely Island, Palm Springs navigates beyond being a strictly derivative echo of a classic with its own unique look and R-rated flavor, and thrives especially on the strength of its two charismatic seriocomic leads. Milioti and Samberg are both able to adeptly pivot from levity to pathos, sometimes in a single scene. Milioti in particular, so great in How I Met Your Mother, the Fargo series and the “USS Callister” episode of Black Mirror, is able to really run the gamut with a fully realized, realistically flawed character, who actively seeks the time of her tenure in this looping purgatory to better herself intellectually and emotionally. The cast is loaded with better supporting actors than the movie needs to have (Peter Gallagher also pops up as Sarah’s father), though it benefits greatly from their contributions. Hagner, Hoechlin, and the always-awesome June Squibb, as Sarah and Tala’s sweet and supportive grandmother, are particular standouts.

The film was a smash at Sundance in January, and its gangbusters reception led to a record-setting $17.5 million sale to Hulu and Neon (it ballooned to $22 million later). According to an extensive piece on the making of the film in The Ringer, Production was brisk but thorough: Barbakow apparently shot-listed every single moment, using variable coverage of the same instances in the characters’ day to avoid letting the repeated instances feel repetitive to audiences. “Even though you’re seeing similar moments, you’re seeing them from different perspectives, and there was a difference in camera height and the angle and lens,” Barbakow told interviewer Jake Kring-Schreifels. Producer Samberg and Barbakow sat in with editor Matt Friedman to finesse the 90-minute film’s rapid-fire pacing and establish a sureness of tone that has clearly served the project well.

Two other core crew members who deserve special mention are costume designer Colin Wilkes and production designer Jason Kisvarday, who work in tandem to brighten up the color palette of Palm Springs in a way that distinguishes it from other time loop fare: this is a chipper, spirited, energetic comedy, and its design choices perfectly reflect that.

Ultimately, Palm Springs is a fun little ray of movie sunshine that, when viewed through the prism of the coronavirus pandemic lockdowns, works as a nice way to productively rethink this worldwide pandemic timeout from normal activity as a moment for self-reflection and self-improvement. In speaking with Cameron Scheetz of The A.V. Club via a teleconference interview, Samberg and Milioti addressed the movie’s winning resonance in our current moment of repetitive citywide quarantines, as all of us grapple with our own constricting Palm Springs scenarios. Milioti noted that what appealed to her, even prior to the current lockdowns, was that the film “was about how hard we try to escape ourselves… and how important it is to face your [submerged personal problems].” Samberg spun our current predicament with the optimism we all could use right now: “Even if you’re stuck inside a loop, [there are] still opportunities to grow and change and learn and love.” Here’s hoping.