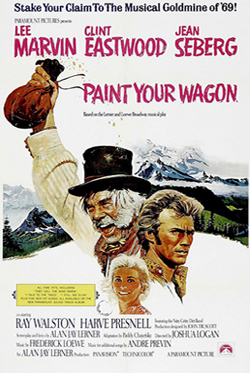 Movie musicals don’t come with a more problematic pedigree than director Josh Logan’s PAINT YOUR WAGON. Starring two notably tone-deaf non-singers, Lee Marvin and Clint Eastwood, and written by that exemplar of “Kitchen Sink” realism, Paddy Chayefsky, Logan’s film is a 2 1/2 hour musical made at a time when the genre was considered box-office poison (the film turned out to be one of Paramount’s highest grossing films but never earned enough to cover its budget). Marvin, who had a No. 1 hit in the UK with his rendition of “Wanderin’ Star”, turned down THE WILD BUNCH for this.