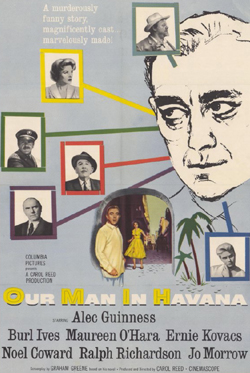 Our Man in Havana

Director Carol Reed filmed his extremely well-cast adaptation of Grahame Greene’s spy novel on location in Havana only three months after Fidel Castro’s January 1959 revolution, and completed it just before Cuba aligned itself with the Soviet Union. Alberto Cavalcanti had explored the idea of directing this in the late ’40s (but set in Estonia) and Alfred Hitchcock was also interested, but former film critic Greene nixed him.