Tony Curtis grew up idolizing the suave and funny Cary Grant, emulated his romantic moves as an actor and then performed a brilliant impersonation of Grant for Billy Wilder. The next step had to be co-starring with the great man himself. Blake Edwards’ amiable, relaxed submarine movie allows Grant to play with ladies’ under-things, while Curtis wrestles with a pig. 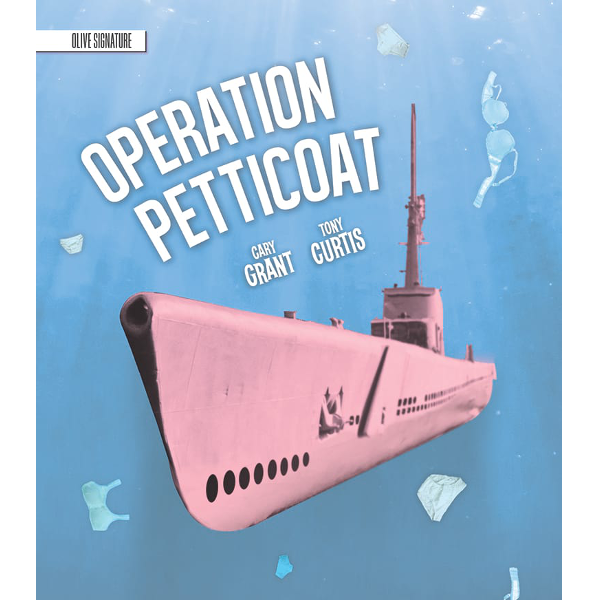 The latest in Olive Films’ Signature Selection special editions is Operation Petticoat, a light comedy war movie noted for teaming Cary Grant with Tony Curtis. One of a group of pictures partly produced by Grant, it didn’t gravitate back to its distributor, Universal. It’s been in need of restoration for some time now; a 2014 Olive disc did well enough to inspire the company to spring for a new video master.

Even before the 1950s studios were listening to analysts telling them that women made most family movie-going choices. Unless they were really gaga to see Gregory Peck or Clark Gable, wives and girlfriends were not keen on hard-nosed realistic fare like Pork Chop Hill and Run Silent, Run Deep. The popular hit Operation Petticoat stretched credibility to combine Mister Roberts with elements more suited to a romantic farce… even the title tells the audience that the show is a safe date movie a war movie ‘played for cutes.’ The late-career star vehicle doesn’t tax Cary Grant’s abilities. Tony Curtis had just performed a wicked impersonation of Grant in Billy Wilder’s Some Like it Hot and was genuinely excited about playing opposite his personal idol. Together they enliven this audience-pleaser set aboard the Sea Tiger, a broken-down submarine that welcomes five Army nurses below decks for a perilous ocean voyage — running away from the enemy. Director Blake Edwards’ career was just beginning to kick into high gear. Apparently acting as a director for hire, he receives no writing credit. But the show falls neatly into line with Edwards’ other Tony Curtis movies about con artists and social climbers — Mister Cory, The Perfect Furlough. Petticoat also dovetails nicely with co-writer Stanley Shapiro’s later Doris Day / Rock Hudson comedies, with their plunge into the double standard of sexism. The predicament of five women sailors bunking in Cary Grant’s submarine is handled just smoothly enough to set up the silly jokes. The WAVES jut out their chests as if to prove that they’re not ordinary sailors; being female is taken as a minor, if desirable handicap. In the advertising, of course, they’re simply called ‘girls.’

Of course the jokes are sexist; the fact that they’re too silly to be offensive wouldn’t be a defense in today’s cultural climate. Grant’s overtaxed captain jettisons the nurses’ underwear out a torpedo tube to convince a U.S. destroyer that his sub is not Japanese. An officer on the destroyer holds up an extra-large brassiere, calling off his attack because, “the Japanese haven’t got anything like that!” In a newer movie, that line would be at least two kinds of PC poison.

The storyline plots the course of a submarine that steers away from confrontations with the enemy. The Sea Tiger is severely damaged in the first days of the war, before its captain Lt. Commander Matt Sherman (Cary Grant) has even left port. Sherman’s crew re-floats the sub aided by the illicit scavenging talents of his new officer Lt. Holden (Tony Curtis). They set sail for the safety of Australia, along the way picking up five stranded nurses. This causes an understandable commotion below decks. The devious Holden sets his sights on seducing Lt. Barbara Duran (Dina Merrill) while the other nurses both help and hinder the functioning of the ship. Major Edna Heywood (Virginia Gregg) turns out to be the perfect machinist’s mate for engineer Sam Tostin (Arthur O’Connell). Lt. Dolores Crandall (Joan O’Brien) accidentally causes Sherman to misfire a torpedo, spoiling the Sea Tiger’s one chance at combat glory. The film’s biggest laugh line is his perplexed announcement, “We sunk a truck.” Operation Petticoat is not an anything-goes service comedy on the order of Operation Mad Ball, in which doofus officers are snookered by miscreant, oversexed Sgt. Bilkos. All the ingredients are there but the script and direction keep the show within the limits of credibility. As with much of Uncle Sam’s forces in the South Pacific, the Sea Tiger must find a way to get back in action despite a breakdown in the spare-parts procurement system. Tony Curtis’ unprincipled Lt. Holden begins as a ceremonial butterfly useful only for dancing with the admiral’s wife, but soon proves himself an artful scrounger of needed equipment and supplies. Curtis adjusts his nervy go-getter persona to harmonize with the acting style of Grant, the past master. Given an unpromising scene in which Lt. Holden turns his talent to stealing a pig, we expect a series of slapstick pratfalls. Curtis instead gives each porker a dainty two-finger squeeze for quality, as if he were shopping for produce.

The relaxed tempo gives Grant and Curtis plenty of breathing room to earn their high salaries. It’s likely that the absence of star actresses was an economy decision. Cary Grant’s main acting chore is to play straight man to Curtis’s mischief and naughty incidents with the nurses. There’s nothing revolutionary about Grant’s approach; the entire film is built around his coy responses to various provocations. Commander Sherman’s typical ‘cute’ reaction is a perplexed turn of the head, followed by a coy half smile delivered with impeccable timing: Mister Charm personified. Captain Sherman even contains his temper when nurse Crandall butt-fires that errant torpedo. In keeping with the sexist Lucille Ball Rule that terminally clumsy women are both funny and irresistible, Sherman and Crandall eventually get together. The Sea Tiger loses its chance to fight yet does its bit by rescuing some Philippine islanders, including the pregnant women. The nurses demonstrate their skills as future Navy wives by delivering two babies on board this ‘kinder, gentler’ submarine. This feminization trend reaches its zenith when a supply shortage forces the crew to paint the sub with bright pink primer paint. The ship is humiliated by jeers from other ships but Commander Sherman is just happy to reach his port. Even with these cutesy touches, Operation Petticoat maintains a reasonable measure of credibility.

On the other hand, modern viewers that vet the movie through a cultural filter may wonder if they’re watching a big private joke, about Cary Grant and his pretty-as-pink gay submarine. Tony Curtis always represented an exemplar of playfully aggressive hetero lust, yet he was also frequently described as so good looking as to be almost feminine. It’s all in the screenplay and the casting – and filmmakers back then surely thought as much about whether a film made anybody look gay, as did actors wary of their images. Although Blake Edwards would later make S.O.B., a nervy farce about scandalous Hollywood, at this time he was mainly concentrating on polishing his skills as an A-level director, and his image as a celebrity insider who works well with others. 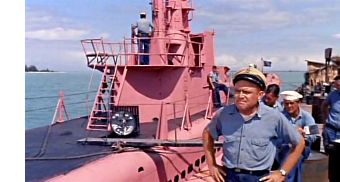 Prolific producer Robert Arthur (The Big Heat, Man of a Thousand Faces, Father Goose) assembles a fine cast presumably eager to work opposite the legendary star. Joan O’Brien and Dina Merrill maintain a basic dignity even when taxed to bump klaxon buttons with their bottoms. One running gag shows the crew having difficulty squeezing past each other in the sub’s narrow corridors — where the nurses seem to think that breathing deep and sticking their chests out will make things easier. Marion Ross (of TV’s Happy Days) and Madlyn Rhue also get their share of comedy bits, reacting in shock to the obscene tattoo on the chest of seaman Hunkle (Gavin McLeod, later of The Mary Tyler Moore Show). Dick Sargent has a plum role as a younger officer enthusiastic about the nurses, while Arthur O’Connell is more restrained than usual as the ship’s cranky engineer. And it goes without saying that Gene Evans is on board. The veteran of Samuel Fuller’s Hell and High Water and Park Row is a fixture in classic submarine movies. You gotta have the gruff, cigar-chewing Evans on board, it’s a Hollywood law.

The story is framed by Sherman’s present-day (1959) farewell to the Sea Tiger before it is finally junked. The various romantic entanglements are settled in the most conventional way, and Sherman’s favorite nurse is still a klutzy menace. The uncomplicated Operation Petticoat is about as relaxing as a war movie can get. Its audience surely skews toward an older crowd these days — I can vouch that today’s community college students no longer know who Cary Grant is. They barely know who Marilyn Monroe is, a fact that took a while to sink in: you’re OLD, Glenn, and today’s kids didn’t grow up watching old movies on TV. Operation Petticoat remains a satisfying light comedy, one of Blake Edwards best.

Olive Films’ Signature Edition Blu-ray of Operation Petticoat follows up on an earlier rather rough Blu release – which had harsh color and was dirty, scratched and a bit soft. Billed as a new digital restoration, the Signature disc is a major improvement in all departments. The many small digs and scratches are gone, but the picture is even sharper, so I think it must have been taken from a better source element. All in all, it’s a brighter, more cheerful copy of this amiable show.

The Signature extras combine critical analysis with anecdotal nostalgia. Adrian Martin gives us a full audio commentary, and Chris Fujiwara’s text essay (in an insert and readable via a disc menu) makes a case for Petticoat’s critical rediscovery. The first featurette up pairs Edwards’ daughter Jennifer Edwards with actress Lesley Ann Warren of Victor Victoria; they simply trade admiring stories about the director. The second featurette likewise gives actors Gavid McLeod and Marion Ross ample time to dish about the experience of working on the movie. McLeod and Ross are exactly the kind of beloved actors that never seem to be tapped for disc extras, and they offer candid, warm memories from the Key West filming location. They tell us that Tony Curtis rented a yacht to take some cast members on a party cruise to Havana. When Cary Grant found out that McLeod and Ross weren’t invited, he took them to dinner. A third featurette is an illustrated talk by Grant biographer Marc Eliot, who covers the actor’s entire life and career at length.

Included for fun is a vintage newsreel featuring shots of the marquee of The Radio City Music Hall, where Petticoatopened in December of 1959. It’s linked with a couple of other items, including a brief, rather dull speech by President Eisenhower (how I long for a dull president). The ‘Sea Tiger’ was actually a real WW2 sub called the USS Balao. A final extra are some home movies taken on the sub when it was in service, including what looks like some actual surface combat (in the Aleutians?).

A parting thought: Operation Petticoat would make an interesting double-bill with Cary Grant’s previous submarine picture, 1943’s wartime morale builder Destination Tokyo. In that soggy epic the star plows his ship right into Tokyo Bay to play havoc with the Japanese fleet. Although the younger Grant did a creditable job as a mostly dead-serious seaman, he seems perfectly at home in a pink ship dealing with diapers, brassieres, and the rascally Tony Curtis.