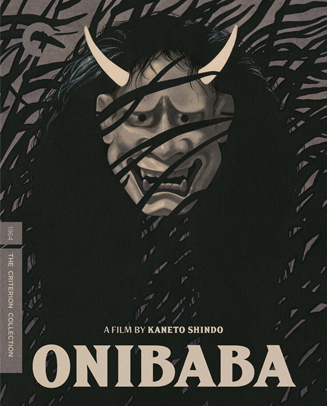 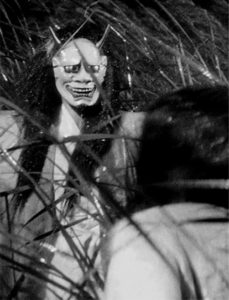 Kaneto Shindô’s Onibaba is a campfire tale not for the faint of heart. The director was just a child when he first heard the Buddhist fable about a bewitched matriarch, told to him by his own mother in lieu of a bedtime story. That evening, the child’s perception of the world, and the women in it, took on a new dimension. The movie Shindô made from those memories is unclassifiable—a Bergmanesque allegory filmed in a graceful yet spartan style with a healthy dose of Grand Guignol to mitigate its pretensions. Produced in 1964, the film is set in the medieval era just as civil war has leveled Kyoto, sending the populace scurrying to the hinterlands. 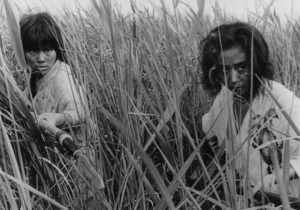 Shindô wrote the screenplay and he leaves it to one of his characters, a deserter named Hachi, to set the stage—the shell-shocked soldier describes a surreal apocalypse akin to Dylan’s A Hard Rain’s A-Gonna Fall; a horse gives birth to a calf, the sun has turned black and day is night, the “world has turned upside down.” Like Macbeth‘s Birnam Wood, nature itself is armed and dangerous; two warriors escape their pursuers through a field of grass when long spears emerge from the brush and slice the men to ribbons. The swords are wielded by two women, a sullen harridan with a killer’s gaze, and her baby-faced daughter-in-law. They survive by executing unsuspecting military men and selling their armor to a merchant, the sort of miser who would underpay for Scrooge’s bed linens. 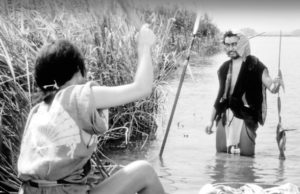 The duo’s swift skill at subduing the doomed soldiers makes it clear that these oddly ritualistic murders are a matter of routine for the two banshees; after stripping their victims, they dispose of the bodies in a nearby hole, deep enough to contain a small platoon if need be. When Hachi the deserter appears at their door, that routine is threatened—the tinder box has found its spark. Hachi and the young woman begin an affair of convenience—lust, not love brings them together, and the old woman, already pining for her lost youth, becomes fearful of losing her livelihood as well—she can’t kill all those soldiers on her own. Another wandering soldier gives her the answer; the ghoulish mask he wears to hide his disfigured face can be used to frighten her daughter-in-law away from her new amour. The old lady kills the soldier and dons the mask. But it fits too well—it won’t come off—when it finally does, the scars of Hiroshima are revealed. 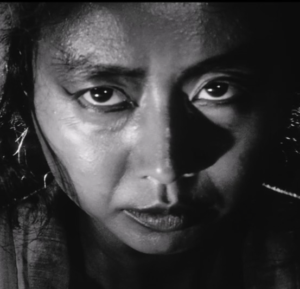 The young woman is played by Jitsuko Yoshimura and her graying mother-in-law is played by the mercurial Nobuko Otowa, the wayward matriarch of Mikio Naruse’s The Approach of Autumn and a literal goddess in Hiroshi Inagaki’s epic fantasy, The Three Treasures. Otowa was only 40 at the time of filming Onibaba and her malevolent energy transcends even her gorgon-like make-up, a perfect Halloween mask with a baleful stare and a rat’s nest of bristled hair with a Bride of Frankenstein streak of white. Shindô’s film is an endlessly compelling and provocative entertainment but an entertainment it remains; it pales in light of other harshly realistic anti-war films like Kon Ichikawa’s Fires on the Plain or Bergman’s Shame. Bergman’s characters are fully realized humans trapped in an existential moment—Hachi and the daughter-in-law are but ciphers. No matter how damaged she is, it’s up to Otowa’s monstrous mother to provide the heart and soul of the movie. Her fate mirrors that of Luzhin in Nabokov’s The Defense, suspended for eternity above an abyss of her own making. 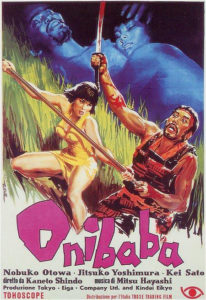 Needless to say, Shindô’s film was a tough sell—it played mostly in New York and California theaters where distributors leaned on the sexual aspect of the movie. Some reviewers, like Kevin Thomas in the Los Angeles Times, ramped up expectations by describing it as “explicit” (Thomas also thought it was “overdone and overlong” but ended up praising it). Italy’s advertising went for the Action for Men crowd. In a nod to the all-encompassing interests of art house denizens, Onibaba premiered in New York on February 9, 1965, accompanied by a short documentary, The Ceramic Art of Japan.

For those who think there’s nothing more beautiful than widescreen black and white, Criterion’s presentation of Onibaba should be a hypnotic experience—the transfer of Kiyomi Kuroda’s exquisite cinematography is as lovely as its source material. Criterion’s extras include a feature length commentary from 2001 featuring Shindô and actors Kei Sato and Jitsuko Yoshimura. There’s also a video interview from 2003 with the director and on-set footage shot during the production of Onibaba. Included in the disc case is a booklet with a perceptive overview from film critic Elena Lazic, the director’s statement, and a recounting of the Buddhist fable that began the director’s journey to Onibaba.