Some like their comedy hot and some like it cold. Billy Wilder opted to step on the joke accelerator to see what top speed looked like. One of the most finely tuned comedies ever made, this political satire crams five hours’ worth of wit and sight gags into 115 minutes. The retirement-age James Cagney practically blows a fuse rattling through Wilder and I.A.L. Diamond’s high-pressure speeches, without slurring so much as a single syllable. 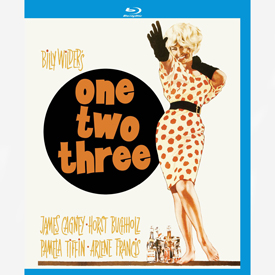 How fast is too fast in comedy? Billy Wilder wanted to find out. One, Two, Three is his Hellzapoppin’ ode to Cold War politics, the classy comedy with the machine-gun pacing. He brings on the jokes, gags, puns and political jabs so quickly that even his perfect cast of fast-talking farceurs has a hard time keeping up the pace. To paraphrase a third act one-liner, the theme is that everything is ‘hopeless, but not serious.’ Although any show with Hitler jokes flirts with bad taste, none of these have real bite, and they’re at the expense of pompous Commies and Capitalists alike. The film is so funny, its appeal wasn’t even compromised when the Brandenburg Gate closed right in the middle of production, marking the beginning of the Berlin Wall. Wilder was forced to build a stand-in Gate set on a sound stage in West Germany.

In the last film of his pre-retirement career, James Cagney is an electric dynamo of pushy, motor-mouthed aggressiveness, whether playing dirty tricks on the East Germans or warming his way into his sexy secretary’s glockenspiel. One, Two, Three gives Jimmy the Gent a thorough workout; its complicated shenanigans build to verbal and action climaxes that put other anything-goes comedies to shame. Oh yes, it’s really funny, too.

Wilder and his co-writer I.A.L. Diamond plunk their madcap story down in West Berlin, the world’s hottest hot spot circa 1961. Nervy, bossy Berlin Coca-Cola exec C.R. MacNamara (James Cagney) wants nothing more than to be appointed director of European operations so he can finally settle in London, with a bowler hat and an umbrella. But  the big boss in Atlanta Hazeltine (Howard St. John) stymies ‘Mac’s’ plan to sell The Pause That Refreshes behind the Iron Curtain. Worse, he expects Mac to host his daughter Scarlett Hazeltine (Pamela Tiffin) on short notice. MacNamara’s vacation is ruined, putting him in hot water with his wife Phyllis (Arlene Francis), who already knows her husband is getting schnitzel on the side with his oversexed assistant Ingeborg (Lilo Pulver). But nothing can compare with the catastrophe that ensues when Scarlett announces she’s pregnant — by an East German beatnik named Otto Ludwig Piffl! (Horst Buchholz).

After their home run with the sentimental The Apartment, the very different One, Two, Three sees Wilder and Diamond running in top form. The story is a twisted takeoff on an earlier satire about sticky relations between the East and West, 1939’s Ninotchka.  Most people would not consider the Berlin Wall and the Cuban Missile Crisis to be a likely foundation for a broad comedy, but Wilder forged ahead. He was one of the writers of Ninotchka, and greatly admired Ernst Lubitsch’s daring wartime followup To Be Or Not To Be. The director had recently proved fearless in a press conference in a visit to the Soviet Union. According to accounts, a Russian reporter attempted to score political points by praising The Apartment’s vision of a decadent America, where a worker must exploit sex to get ahead. Wilder retorted that he agreed entirely: The Apartment could indeed never happen in Moscow — because there’s no such thing as an available apartment!

Billy Wilder normally didn’t come out with opinions on politics. He had participated in the de-Nazification of Germany, and made an excellent, edgy comedy from the experience called A Foreign Affair. During the 1950s he mostly stayed away from topical themes, especially after the backlash of his caustic, blacker-than-black film noir Ace in the Hole.

But in One, Two, Three Wilder comes out swinging at every pitch available. It’s everything American: baseball, soft drinks, Huntley & Brinkley, Gone With the Wind and the Pledge of Allegiance — versus everything Eastern-bloc:  Commisars, party dues, propaganda, missiles, caviar, trains that don’t run on time. Pitiless East German Polizei interrogators use the annoying novelty song The Itsy Bitsy Teeny Weenie Yellow Polka Dot Bikini as a torture device. Americans are pushy, boorish, ignorant, sex-obsessed and success-driven, while the East Germans and Russians are sneaky, arrogant, paranoid Marx-spouters that hate The Wall Street Journal and want Yankee to Go Home. In between, Wilder gets in a few merciless jabs at the efficient West Germans — every West Berliner seems to have a guilty secret in his closet. A reporter is revealed to be an ex-S.S. officer. MacNamara’s own assistant Schlemmer (Hanns Lothar) clicks his heels at every command and lets slip that he used to be a pastry cook in the S.S., but it’s okay because he was  “A very bad pastry cook.”

MacNamara: “Schlemmer! You’re back in the S.S. again! Smaller Salary!”

Wilder pulls in references so fast our radar picks up only the top 20%: grapefruits in the kisser (Public Enemy), a bowler and an umbrella stored away for a big promotion (Mister Roberts), a nobleman reduced to working as a restroom attendant (The Last Laugh). Guest star Red Buttons contributes some of his most worthy screen time doing a great Cagney imitation.

Cagney is nothing less than marvelous, changing comedic gears at the drop of a cuckoo clock and keeping us breathless with his limitless energy. Cagney’s still so spry, once or twice we almost think he’s going to break out in a dance. Cagney made a lot of great pictures during his Warners’ heyday, but few demonstrated his comedy talent to the degree seen here.

The much-maligned Horst Buchholz is intense and frenzied as the commie punk who doesn’t wear underwear, spits in disapproval of Coca-Cola diplomacy, and wears a wedding ring “Forged from the steel of the guns of Stalingrad!” Pamela Tiffin has her best role as an air-brained jet-setting Southern belle likely to fall in the sack with every Otto or Pierre available. She’s ready to become an impoverished Communist bride, but only if she has the proper tableware like back home in Atlanta.

Arlene Francis displays perfect punchline delivery as MacNamara’s patient but wisecracking wife, trying to find out what ‘Schwanger’ means and mimicking Scarlett’s hysterical laugh. Previously seen with John Gavin in Sirk’s tragic A Time to Love and a Time to Die) Lilo aka Lisolette Pulver is the tall, stacked secretary Ingeborg, who gives Wilder a chance to lampoon lust, German-style. A borderline nympho, she laughs like a stevedore and snaps out some of Wilder’s best raunchy humor.

Ingeborg: “That’s nothing, you should see my sister!”

Angular Hanns Lothar’s heel-clicking functionary is so obedient, we wonder what he’d do if Mac ordered him to jump out a window. Completely corruptible commissars Leon Askin, Ralf Wolter and Peter Capell provide the crass example MacNamara uses to eventually convert Otto Piffl to freedom-loving Western ways . . . after a short detour into aristocratic decadence, via an arranged adoption by the monocle-snapping Count von Droste Schattenburg. In short, Communist ideology proves too inflexible for warm-blooded humans, and MacNamara wins his case.

The film’s claim to fame is an eight-minute stretch in which MacNamara does a high-toned makeover on the beatnik Piffle, bringing in a parade of tailors, barbers, haberdashers, etc., and rattling off pages of exacting dialogue with perfect articulation and precision — precisely as Wilder wrote it. The process reportedly took many takes and strained some tempers. This dovetails into a mad car chase to the airport for a sharp finish. Wilder’s breakneck pace leaves little room for reaction time, just a raised eyebrow or a quick breath. Audiences laugh, and then quiet themselves to not miss out on the next joke.

The amped-up pacing works because it has not been forced onto the material.  MacNamara’s demands inspire the agitated Germans to lunatic levels of efficiency, unlike the Neopolitans of Avanti! that are forever trying to slow things down. Fifty-six years later, with its topical subject matter now considered ancient history, One, Two, Three still keeps audiences breathless and laughing.

The KL Studio Classics Blu-ray of One, Two, Three is a welcome disc of this genuine comedy classic, an experiment of pace and pitch that comes off beautifully. For his second Panavision picture Wilder uses the wide screen to better block his dialogue scenes and not break up the performances with too much cutting. James Cagney’s MacNamara is often the shortest person in the room, but he’s a giant of energy. Much of the film was shot on location in West Germany, and reportedly in East Germany as well, at least until the crazy political situation closed off the border and threw the production into an expensive tailspin.

The B&W scope cinematography makes excellent use of the entire grayscale, avoiding deep blacks but maintaining a bright, cheerful surface. The professionalism of the performers results in a razor sharp soundtrack, where not a single word of Wilder’s exactingly engineered script is muffed or mumbled. Dialogue expert Wilder designed his lines to flow in a particular way, for a particular effect. He’s the anti-improvisation director.

A major draw for fans ought to be Michael Schlesinger’s commentary. Schlesinger introduced the film at the TCM fest a few years ago, basically performing a standup comedy warm-up that put a sleepy audience in the mood for hilarity. On this full commentary track Michael decided that his best bet was not to tell us how funny the show is, as we can see and hear that for ourselves. He instead provides a major public service by explaining all of the 1,001 topical references and pop culture in-jokes peppered into Billy Wilder’s screenplay. What does, “I once necked with a Stevenson Democrat” really mean? Schlesinger has the answer. He also nails most of Wilder’s reflexive jokes referencing his own work. He doesn’t care for Red Buttons’ contribution, whereas I think it’s the comedians’ finest hour; any ‘Hellzapoppin’- styled movie with James Cagney needs at least one manic Cagney imitator. Schlesinger is simply the best choice imaginable for this show — his own jokes are endearing, and he even pauses once or twice to explain how extreme some of the film’s humor was back in the day — flirting with borderline vulgarity and bad taste. The jokes about the SS are hilarious . . . but in a less classy presentation they might not be.

The unnamed Kino disc producer rounds up good extras. We see an excerpt from Volker Schlöndorff’s great interviews with Billy in his Beverly Hills office (right across the street from the deli!). Another piece dutifully revisits an MGM featurette from the DVD. Several Wilder trailers finish off the package; the one for One, Two, Three sells the show on Billy Wilder’s reputation, as if United Artists were afraid of making light of the Cold War.

The cover art is reversible, contrasting the original Saul Bass graphic with a great image of Our Miss Ingeborg. This disc makes the old MGM flipper DVD from 2003 superfluous, unless you want to hear the picture in French or Spanish. For its international versions One, Two, Three must have been a major dubbing nightmare — did Kenya and Mumbai have to re-write many of those topical, U.S.- centric jokes?