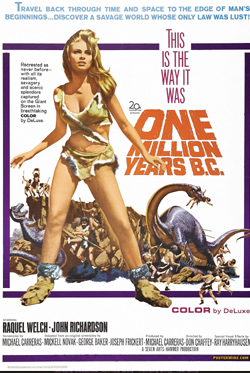 One Million Years BC

This is the way it wasn’t! A longtime favorite with Creationists, this loose remake of the 1940 cavemen-vs.dinosaurs epic made a star of unknown Raquel Welch despite the fact she has almost no dialog. Its success, which led to several further prehistoric adventures from Hammer, was eclipsed by the phenomenal reaction to a single iconic publicity still of the star in her fur bikini, which became a wildly popular poster and cultural touchstone. Ray Harryhausen, who supplied the mostly stop-motion monsters, made only four more films before retiring. The US release was cut by 9 minutes.