High-quality chopsocky mayhem!  Guest reviewer Lee Broughton returns with an assessment of Jimmy Wang Yu’s action-packed martial arts flick. The combat comes thick and fast when a team of deadly mercenaries are employed to wipe out the honourable pupils of the Zhengde School. Writer-director Jimmy Wang Yu is placed front and centre in most of these fights. Excellent fight choreography, commendable cinematography and a well-realised vengeance narrative make this fast-paced show a winner. 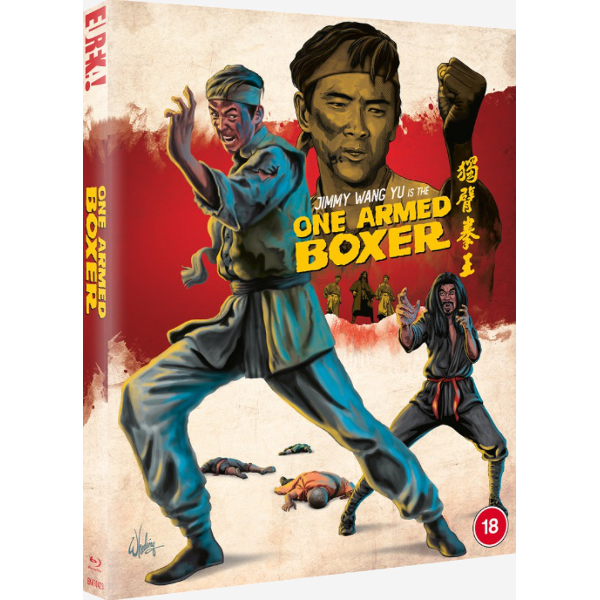 Ma Wudao and members of the villainous Hook Gang viciously assault and rob a patron in a teahouse simply because he was sat at their regular table. Yu Tian Long (Jimmy Wang Yu) and his honourable brothers from the Zhengde School intervene and humiliate Wudao and his men with their superior martial arts skills. Wudao subsequently convinces the Hook Gang’s leader, Shao Laoliu (Yeh Tien), that Yu Tian Long provoked the fight and insulted Laoliu in the process, which leads to an increase in hostilities between the two outfits.

When the kung fu craze hit the UK in the early 1970s, our tender ages meant that me and my schoolmates had to make do with hanging Bruce Lee posters on our bedroom walls and following the weekly adventures of David Carradine’s Kwai Chang Caine on TV.

When it came to gaining insights into kung fu films, we were reliant on the goodwill of one pal’s older brother and his friends, who would let us listen to their conversations about the latest chop-socky features that they had seen at the cinema. Beyond the iconic films of Bruce Lee, the one show that these kung fu flick aficionados talked about with great regularity was Jimmy Wang Yu’s One Armed Boxer. Almost fifty years on, I’m finally able to appreciate just why it made such a big impression on them.

Produced by Hong Kong’s Golden Harvest Company, One Armed Boxer is a loose re-write of an earlier Jimmy Wang Yu vehicle, the ace Shaw Brothers’ wuxia film One-Armed Swordsman which was directed by Cheh Chang in 1967. One Armed Boxer is just as exciting and as entertaining as its predecessor and Wang Yu, in his roles as writer and director here, ensures that the viewer becomes deeply involved in the proceedings at an emotional level by following Chang’s example when setting up Yu Tian Long’s motivation.

In One-Armed Swordsman, a number of noble supporting characters meet awful ends when a villainous gang deviously employs a new and deadly “Sword Lock” weapon as they go about their mission to wipe out the pupils of the Golden Sword School. The unfair advantage that the Sword Lock grants the villains is guaranteed to have excitable viewers screaming at the television screen in frustration as yet another brave hero unknowingly enters into a fight that he cannot win and tragically bites the dust.

In One Armed Boxer, the sword fights are replaced by martial arts fights and the Sword Lock weapon narrative device is replaced by a team of hateful foreign mercenaries who are experts in fighting styles that are unfamiliar to the pupils of the Zhengde School.

Vampire fanged Natini Taro (Wong Feu-Lung) and his students Hasegawa (Hung Tsai) and Sakata (Wang Yung-Sheng) are Karate experts from Okinawa, Koji (Tung Chiao Wu) is a Judo master from Japan, Kim Jim Yong (Shan Mao) is a Taekwondo expert from Korea, Nai Cai and Mi Sao are kick boxers from Thailand, Mura Singh is a yoga expert from India and Zuo Long and Zuo Hu are Lamas who practice Tibetan martial arts. They’re all merciless killers who sadistically revel in proving that their chosen fighting styles are superior to the Chinese boxing favoured by the Zhengde School.

When we see the polite, clean cut and fresh-faced Zhengde School pupils bravely entering into a series of one-on-one fights with these grizzled psychopaths, we instinctively know that things aren’t going to end well for them. Each mercenary gets to showcase the deadly nature of their fighting skills and it’s heartbreaking to behold the Zhengde School’s young martial artists losing a succession of harrowing fights to the death. When Yu Tian Long loses an arm in his fight with Natini Taro but manages to escape with his life, we can’t wait for him to recover and seek the appropriate vengeance.

In this regard, Jimmy Wang Yu second-guessed the needs and expectations of his audience really well when writing this show. In One-Armed Swordsman, a farm girl takes in Wang Yu’s wounded eponymous hero and a dramatically appropriate amount of time is taken to chart his slow recovery, the frustrations he feels, his training in a new sword fighting style and his developing relationship with the girl. That approach suited One-Armed Swordsman perfectly since the need for direct action by the hero was yet to arise at that stage of the film. However, One Armed Boxer is a different but no less worthy beast.

Here Wang Yu covers the same narrative material in a fraction of the time but we don’t feel short changed by his filmic shorthand. Truth be told, the film really doesn’t need any more detail regarding Yu Tian Long’s recovery, his training or the nature of his relationship with the girl and neither does the viewer. The burning desire for vengeance is very much already in place at this stage of the film, so we just need to know how the strength in his remaining arm and hand has been enhanced and what he’s now capable of doing in terms of fighting. As soon as those points have been satisfactorily addressed we just need Yu Tian Long to hit the vengeance trail pronto. And he does just that in a really spectacular and highly satisfying way.

One Armed Boxer is expertly scripted in a way that allows Wang Yu to present a story that is built around a series of exciting and involving fights. These fights arise in quick succession but they all have legitimate places within the film’s story and they never feel forced or become repetitive or tiresome. The really superb fight choreography on display here (the film’s credits list Chen Shih Wei as “action director” / “martial arts instructor”) undoubtedly contributes to this fight heavy show’s ability to remain enthralling for the entirety of its running time.

One Armed Boxer is also a smart looking film. There’s some excellent cinematography to enjoy here and some well-deployed Spaghetti Western-style snap zoom shots work really well during the initial stages of the film’s fight scenes. And that’s not the only Italian Western influence to be found in Wang Yu’s film.

Some of the show’s music possesses a Spaghetti Western vibe too. And its excellent front credits sequence features a cool A Fistful of Dollars-style rotoscope animation of two martial artists fighting. This animation dances over the top of flashing still images that are taken from the film’s action scenes. All of this is set to an instrumental edit of Isaac Hayes’ iconic theme from Shaft and it is — quite simply — the perfect way to set up a high-octane action film like this.

The show’s sets and locations are pleasing too. The fedora hat worn by the Hook Gang’s first victim suggests that the film is set in the 20th century but that hat is the film’s only symbol of modernity. Indeed, a well-realised rural setting gives One Armed Boxer the look and feel of a film set in a somewhat earlier time period.

The often terrible quality of the old English language dubbing tracks that kung fu films were saddled with when they first appeared in Western cinemas and on home video store shelves had elitist reviewers and smart-ass film snobs quickly peddling the idea that such films were laughable trash. Some of them might well have been but the presence of One Armed Boxer’s superior Mandarin language dub track here (supported by optional English language subtitles) means that there should be little chance of this thoroughly entertaining film being dismissed in such a manner today.

Eureka Entertainment’s Region B Blu-ray of One Armed Boxer features picture quality that is excellent for the most part (the images used for illustrative purposes here are taken from older sources and do not reflect the excellent picture quality of the new Blu-ray). The sound quality of the English language and Mandarin language dub tracks that are offered here is very good, though the dialogue present on the English track is a little abrasive sounding in places. The first 2000 copies of this release come with a 20-page booklet featuring writing by James Oliver and Craig D. Reid, a reversible poster and a card slipcase.