What a great sales hook — a feature film with a Bernard Herrmann music score that we hadn’t heard of. And one of the writers was Martin Scorsese, before Boxcar Bertha and Mean Streets! But wait, it isn’t as simple as that. The new release is more than a little confusing. Its own ad copy first calls this Dutch production ‘obscure,’ and not four sentences later describes it as a ‘classic exploitation film.’ 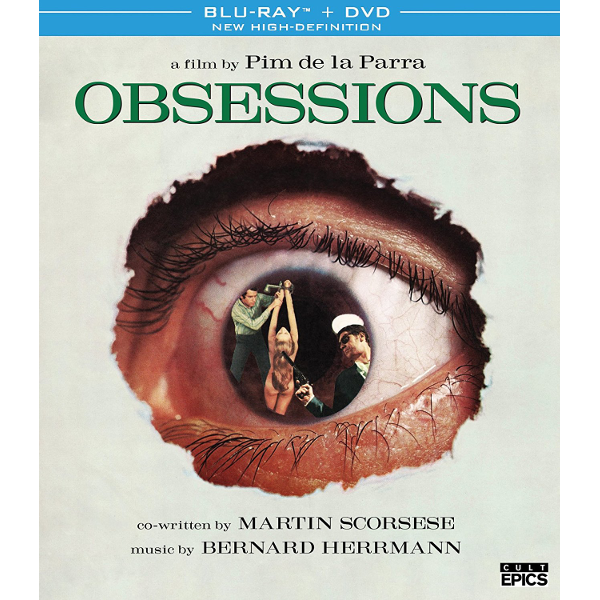 Filmmaker Martin Scorsese went to Amsterdam and Brussels to show one of his short films in 1968, and fell in with some Dutch filmmakers just as obsessed with classic thrillers as was he. The American did a dialogue polish on Pim de la Parra’s sex & murder thriller, a low-budget item by our standards but upper-class commercial art filmed in English but aimed at the continental market. Scorsese’s contribution is easy to spot: at one point the heroine can’t get the young hero to kiss him, because he’s watching The Big Sleep on Television. Some scolding is in order: “What’s your problem? I’m alive — that’s a celluloid shadow.” 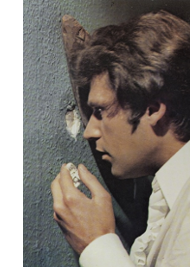 De la Parra’s Obsessions is called Bezeten – Het gat in de muur in its original Dutch, with the additional title translating as ‘the hole in the wall.’ Proving that great minds think alike in different countries around the world, this film not only goes for the same audience as Dario Argento’s first giallo just one year later, but also mixes in film-school cinematic references by the bushel, as the young Brian De Palma was going crazy with in his marvelously anarchic early New York movies. And then there’s the audience for what would later be known as ‘Erotic Thrillers,’ which exploded with direct-to-video VHS releases in the 1980s. The Dutch and German cinemas weren’t as adverse to wall-to-wall nudity, which in 1969 secured Obsessions a lot of screen space across the Northern half of the Continent. In other words, the enterprising (and clearly well-heeled) young Dutch filmmakers tailored their independent picture to commercial requirements. It has sex, nudity, violence, suspense and one name actress for the marquee, the beautiful Alexandra Stewart.

Although we’re told that the show was a solid Continental hit when new, a lot of it has an awkward, amateurish feel, that’s not helped by a less-than-stellar surviving transfer element.

Medical student Nils Janssen (Dieter Geissler) is carrying on a torrid affair with reporter Marina (Alexandra Stewart), not realizing that suspicious activity in the apartment next to his own is related to a disappearance she’s investigating. Discovering a peephole in his wall, Nils observes a man next door (Tom van Beek) making love to more than one woman, but apparently drugging them as well. Murder might even be involved. Nils finds a way to sneak next door and obtains a sample of the drug, which turns out to be a potent psychedelic-narcotic. He also finds a gun, money — and even a drugged woman tied to the plumbing in a bathtub. Yet Nils doesn’t call the cops, preferring to investigate on his own — and he doesn’t tell Marina soon enough, unaware that their investigations are dovetailing together. Just how much trouble can this voyeur get himself into?

A blind man would realize that Obsessions is a Hitchcock take-off, made before such elaborate hommages became a substitute for original film creativity. Some of the student film generation of the late-60s and early ’70s made their careers by reviving filmic flash and cinematic grammar largely abandoned by the mainstream — when Brian De Palma used subjective camera techniques and Spielberg resurrected the Hitchcock smash-zoom from Vertigo, we film students shouted ‘yes!’ and grumbled because they got there first. With or without Martin Scorsese’s influence, Obsessions seems a direct descendant of Rear Window (spying on the neighbors, almost getting caught sneaking into a killer’s lair) and Michael Powell’s Peeping Tom (the heavy reliance on voyeurism, close-ups of eyes, etc.) Years earlier, Riccardo Freda and Ernesto Gastaldi had a wicked good time hijacking gothic visuals and situations from Hitchcock thrillers for their The Horrible Dr. Hichcock. But Brian De Palma would be the one to really go the distance, shaping every detail in his Sisters from borrowed Hitchcock elements, as if reconstructing a Volkswagen from selected aftermarket parts. Considering the trench coat and hat worn by the expressionless villain, and the large American car he drives, I was wondering if the character was a reference to the French filmmaker Jean-Pierre Melville.

Actually, De Palma’s flaky but wonderful Murder à la Mod (1968) beat these Hollanders to the draw with a circus of ultra-clever, ultra-inside cinema references. But it played at a few art theaters, while De la Parra’s less sophisticated farrago cleaned up on the mainstream European circuits. Why? Because it’s also smartly judged exploitation. In 1969 European audiences were curiously amused to see full topless nudity on the screen in this kind of abundance. 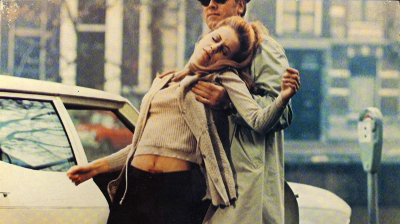 That’s the major appeal of Obsessions, which never lets one forget that it’s a slightly smutty peepshow first, and a suspense thriller second. Suspending disbelief is a must, as the storyline goes way, way into absurd territory. I’m not talking about the easy stuff, like struggling women being strong-armed and manhandled from a car into the villain’s apartment, without anybody in the busy canal-side Amsterdam neighborhood even noticing. The hero gets his jollies watching the live sex & danger show that plays in the peep hole at all hours of night and day. But we really don’t understand that he would witness what look like kidnappings, mass rape and potential murder — for days — and not call out the Royal Orange Marines, let alone the cops. Nils has soon seen enough for the grateful Polite to overlook his little Peeping Tom problem, and offer him an award to boot. He instead gets himself involved, rescuing a single victim (naturally gloriously shapely) who is sooner on her feet than she wants to make love to him too. That’s in addition to various clinches between Nils and Marina, in bed and in the shower. Scenes fade before any soft-core action gets underway, but I’d say that at least 15% of this show is various people disrobing.

The tone is fairly legit but the acting is all over the place. Dieter Geissler soon stopped acting to concentrate on his booming producing career, which includes huge international titles like The NeverEnding Story. His accent is just odd enough to throw off many of his line readings. Even though all he’s asked to do is register as obsessive about his peeping he’s a weak hero, who engages in too much illogical behavior for us to identify with him. Most of the other characters walk through their roles. Marina’s boss is terrible, but a chemist that Nils consults is excellent. The film’s one impressive main performance is that of Alexandra Stewart. Despite the adverse conditions — a cheap production with male filmmakers angling for skin at every turn — her Marina is always likable and convincing. She even drives an odd car, a tiny Honda sports model that I’m not certain was ever exported to the U.S.. 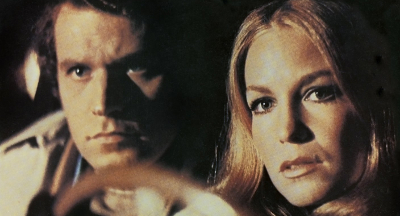 By tightly controlling his angles and returning to the same type of shots, director De la Parra achieves a superficial Hitchcock buzz. The many peephole views seem awfully wide considering the kind of hole in use, but we’ll forgive that. Much of the suspense is by-the-numbers yet acceptable. They come up with a reasonable party scene, but the film’s real production value is in all the drugged women draped here and there. It seems shocking when Nils’ reaction is a sort of opportunistic complicity. I suppose the filmmakers had a similar reaction, for he pays dearly for his moral transgressions.

Cult Epics’ Blu-ray + DVD of Obsessions is a mixed bag as a disc offering. We’re told that the source was an uncut surviving print, and it seems to be intact. The color, unfortunately, is very faded, which cuts down on the enjoyability factor. Everything tilts toward browns, and there’s no density to the image. The video pros I watched the film with were not convinced that anyone tried to rebalance the colors — noting that what we see looks like the ‘before’ in a comparison where modern colorists can pull a lot more out of the image. It’s hard to say: perhaps the original was really light and monochromatic. It hurts on a subject that relies on so much glamour photography — if the women look a bit wilted, we cinema voyeurs suffer. Ms. Stewart is still elegant, but not as regal as she might be.

The presentation is full-frame on a show that looks like it should take at least a 1:66 widescreen matte. With the top and bottom of the frame opened up, Nils is often left adrift in the middle of a blank wall. If you want to see original harmonious compositions, perhaps your setup can be adjusted. 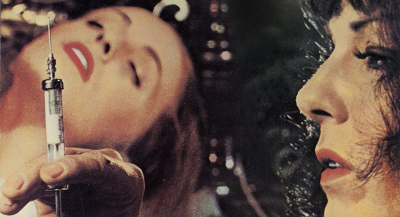 The disc includes welcome new interviews with the star Geissler and the director. Geissler’s thoughts are better organized but De La Parra eventually explains how things came about and how Bernard Herrmann got involved. The composer simply directed them to where they could license tracks from his old CBS radio shows. Thus we hear selections that ardent Herrmann fans might already know, little familiar-sounding mood and suspense cues. They aren’t particularly well-spotted, giving the impression that somebody in the screening room has dropped the needle on a Herrmann LP (which we film students sometimes did when screening silent movies). One cue seems to have been edited in a little roughly, as it overlaps a key word of dialogue. The title theme doesn’t sound like a Herrmann cue at all. The chance to hear new Bernard Herrmann film music — in an oddball Dutch exploitation film — was irresistible, but the takeaway is less than gratifying. Although some of the dialogue on the soundtrack is slightly distorted, the music cues are not.

Cult Epics’ extras also include a text note from Martin Scorsese, introductions by Geissler and De la Parra, a Dutch trailer and a photo gallery.