One of Alfred Hitchcock’s so-called lesser films bounces back in an immaculate restoration. Say goodbye to dismal, indecipherable Public Domain versions — now we can fairly evaluate this amusing early talkie. An odd cross-section of underworld characters gathers amid the staircases and dark shadows of an abandoned house and proceeds to play games of identity and coercion. What happened to the body that was on the third floor landing?  Who is the mysterious mastermind whose note warns about a cop, and promises a diamond necklace?  Who is the mysterious woman who cannot hear or speak?  And is our hero a random passerby who followed his hat blown by the wind?  Kino’s deluxe disc features audio excerpts from Hitchcock and a longform French documentary about his early sound career. Going to take a college class on Alfred Hitchcock?  It’s not very likely that the instructor will screen Alfred Hitchcock’s Number Seventeen, and ask you for a thesis paper comparing it to Vertigo. In fact, this is one of those early talkie Hitchcocks that almost nobody has seen. My only exposure was an unwatchable print on a Public Access channel, maybe around 1980. The murky picture didn’t allow me to tell one actor from another, and I heard about 20% of the dialogue. The continuity was so bad I couldn’t follow the story — but I notice that the end took place on a train.

This new remastered edition tells me that what I saw before doesn’t count. The HD image is near-flawless, showing us a film set entirely at night in a shadowy deserted house, with enough shadows to launch 1,000 term papers about German Expressionist influence in Hitchcock. The audio can be a little low on the clean track, but that’s par for Brit films of the early ’30s. For ignorant dead-ear Americans like myself, the subtitles button is a click away. In other words, we’ve got a new Hitchcock thriller to mull over. It comes from a stage play and the last couple of reels take place on a runaway train, so I think it’s safe to assume that Alfred and Alma’s input was to give the drama a socko action finale. 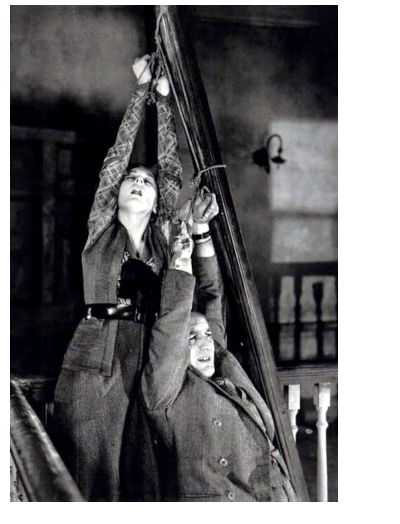 1932 is presumably before the advent of Hitchcock’s ‘MacGuffin’ theory, his gimmick of supporting the thriller format without an important conflict beyond ‘Boy Survives to Kiss Girl.’ There is a stolen necklace, an ordinary focus for the thieves. A group of potential villains in trench coats converge on an abandoned wreck of a building. Most everybody is concealing their real identity, so I’ll stick to initial impressions. ‘Barton’ (John Stuart) might be in the house by accident: the night wind blew his hat to the entranceway, where he spied strange lights inside. Barton meets Ben (Leon M. Lion), an eccentric sailor who’s so goofy, he might be putting on an act. They find a dead body on the third floor landing — which disappears a little while later: was it moved or was the corpse shamming?

When in doubt, always have someone make an unusual entrance. Pretty blonde Rose Ackroyd (Ann Casson) tumbles through a skylight window; she’s been summoned by a mysterious note involving a priceless necklace. She was looking for her father, and fears that the missing body might be him. Two more men, Brant and Doyle (Donald Calthrop & Barry Jones) enter in the company of Nora (Anne Grey), Brant’s wife . . . maybe. Nora is introduced as being deaf and dumb, but by now we’re not believing anything. In the course of the evening two or three fights break out, Rose is accidentally slugged by the oafish Ben, and the mastermind that got everybody excited about the stolen necklace shows up for more thuggery. The most Hitchcockian moment — or Fritz Langian? — sees Rose and Barton tied to a bannister rail, which collapses, leaving them hanging like rag dolls over a long stairway drop.

Hitchcock plays up the mystery and lets the unlikely events unspool as odd interactions between characters. The dialogue isn’t exactly witty but it does try to be suave; the thieves of course pretend to be something they’re not, and nobody knows what the expected mastermind looks like. The action isn’t bad, and several scenes involving half-seen figures and shadows on walls are nicely done — now that we have an intelligible copy of the show to evaluate. After one viewing I wonder if I missed something — one of the leading ladies is just left behind when the big chase begins. 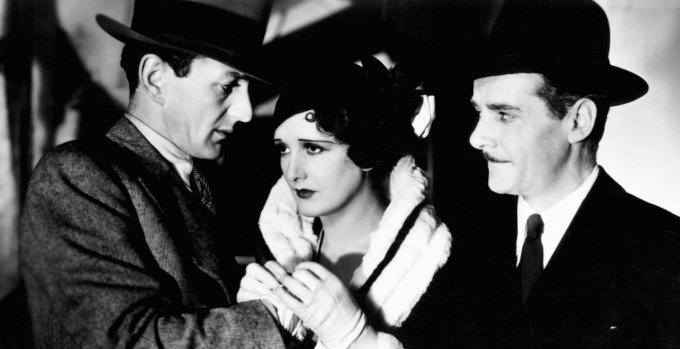 The three crooks escape via a railway line that’s said to be underneath the house (?); they immediately double-cross each other. Identities and loyalties switch back and forth, so I won’t identify which of the ‘heroes’ pursues the thieves by hopping on the fast-moving freight train. The extended action climax becomes a 1932 London equivalent of Die Hard. Everybody climbs on the outside of the fast-moving train cars, as if they’d all taken lessons from Jackie Chan. The line terminates at a Ferryboat, so when the engine drivers are put out of commission, the big climax is a nasty full-speed collision.

This is not a cheap movie despite spending more than half of its running time in one (quite elaborate) setting. The lighting cinematography is quite good, and the audio recording is decent. Hitchcock directed his cast to behave naturally, all except the kooky star Leon M. Lion, who behaves as if he’s on a music hall stage. (top image)↑  The dialogue never sounds dubbed but the sound effects are rudimentary and primitive, especially the thin ‘foley’ in the rough and tumble fight scenes. 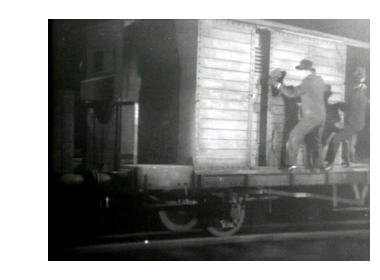 I’m presuming that the entire train sequence is an addition to open up the stage play with something big and cinematically exciting. →  The most ingenious effect shows both heroes and crooks climbing on the sides of box cars with ease, something that only a human fly would dare under most circumstances. One angle is a split screen, with live-action above, and an added miniature below: the train undercarriage, wheels and the ground whizzing by. It’s very clever.

More than half of the train chase sequence is miniature work, literally every wide shot that can’t possibly have been lighted at full scale. A commandeered bus chases the train to the coast, giving us elaborate, rather impossible trucking angles as the bus and truck race neck & neck, crisscrossing each other through tunnels, etc.. ↓ The elaborate miniature landscapes are extremely good and Hitchcock’s camera angles are dynamic and clear. The train crashes onto the ferry, which of course is a miniature as well. The camerawork doesn’t disguise the toy scale.

The sequence is definitely ambitious. Model work that to us seems obvious and distracting was the accepted norm back then. Audiences responded to the dynamism and excitement; some thought everything on the screen was real and others didn’t expect anything to be real. For the standards of 1932 these special effects are pretty spectacular.

Uncredited miniatures supervisor Bill Warrington was the authority in England for quite a few years, contributing creatively to favorites Caesar and Cleopatra,  Give Us This Day,  So Long At the Fair,  The Purple Plain,  Pursuit of the Graf Spee,  Quatermass 2.  He also has credits on Sink the Bismarck!,  The Guns of Navarone and many more effects-heavy shows. 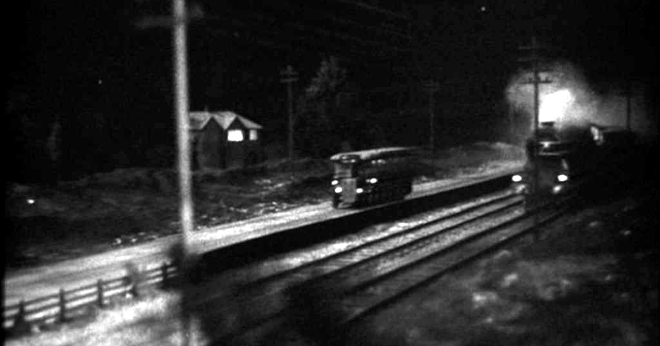 Hitchcock seems to have gotten wall-to-wall miniature sequences out of his system on this picture; maybe he needed that technical challenge to stay interested in the story. The ending romantic pairing of Barton and one of the beautiful women is rather carefree considering that they’re both neck deep in a disaster involving a wrecked train and a destroyed ferryboat, not to mention any number of undisclosed fatalities. I think the film’s sequel could be titled The Lawsuits Numbered Seventeen Hundred.

Neither the main hero or his leading ladies seem familiar now. I know actor Barry Jones very well, from later favorites Seven Days to Noon and Return to Paradise. Jones’s most well-known show is the musical Brigadoon. Donald Calthrop is almost as familiar as names go. Hitchcock had used him in Blackmail and Murder!  We Sci-fi addicts know him as the actor who took over Peter Lorre’s role for the English-language version of the German thriller F. P. 1 Doesn’t Answer. 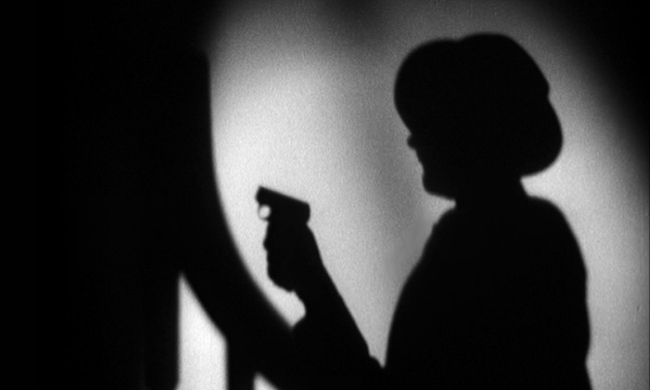 The KL Studio Classics Blu-ray of Number Seventeen looks incredibly good in Studiocanal’s 4K restoration . . . making us pine for the restoration of favorite classics available only in wretched condition. The image almost looks too good: the clean titles are so sharp and rock-steady that only the accurate-looking lap dissolves convince us that they haven’t been reconstructed from still frames. 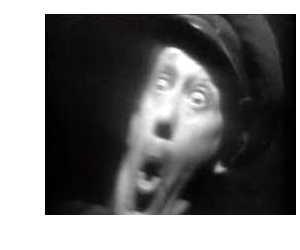 The excellent image allows us to evaluate filming methods with less guesswork. When too characters are surprised, Hitchcock uses an expressionistic device — he has the cameraman distort their faces with a wavy mirror. →  We also get a good listen to the soundtrack, which yields no added hiss or distortion.

Kino gives us input from expert Peter Tonguette on a play-by-play audio commentary. We learn that Hitchcock was accustomed to choosing his projects by this time, but had to take Number Seventeen as an assignment because his previous picture didn’t do well. He had been at British International for five years and this became his last show for the company. Hitch was proud of the film’s miniatures but almost nothing else; perhaps this experience made him think deeper about what ‘spy chase’ and ‘man on the run’ stories needed to stay fresh with an audience. The answer was probably ‘more exotic women and more romance.’

We learn that the actor Leon M. Lion was also the producer. He had been a theatrical name for decades, acting, writing and directing for the stage. Hitchcock hated him, and his ‘starring’ role with its overplayed dimwit jargon is only fitfully amusing (especially when he keeps getting excited and slugging one of the actresses).

Nöel Simsolo offers a helpful introduction, which I recommend watching after the movie. He says that Hitchcock owned the film’s property, which doesn’t jibe with the other information that it was imposed on him by the studio. He also tells us that the director was ‘titilated’ by scenes of women in handcuffs here and in other lovers on the run movies. Also present is the relatively short audio recording of the famous Truffaut / Hitchcock interview pertaining to this show. Sure enough, Hitchcock does seem to want to skip to movies he cares about more.

We also are given a documentary on Hitchcock: Films de Jeunesse (1926-1934) by Nöel Simsolo. Speaking are critic Bernard Eisenschitz and director Claude Chabrol, both of whom find Number Seventeen to be fun, an amusing lark.

Yes, there’s no denying that Alfred Hitchcock collectors will want to nab this title; they’ll find it a lot more interesting than its reputation.