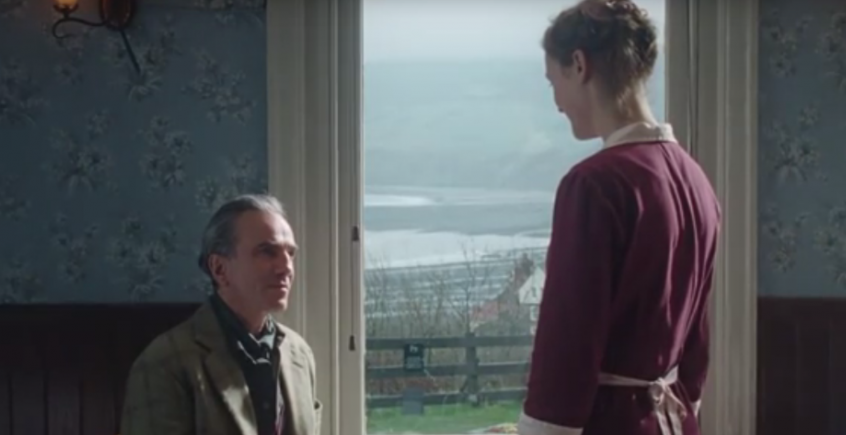 The first thing that struck me as I mused in the glow of the announcement of the Oscar nominations Tuesday morning, specifically about the Best Picture nominees, is that outside of not yet having seen the film mentioned above, I don’t have a problem with the presence of any of them. Of course, there are several movies I’d rather see in there instead which, even given Oscar’s new Age of Diversity and Enlightenment, would have no shot at a nomination (PERSONAL SHOPPER, SLACK BAY), and even one that you’d think would fit right in with Oscar’s previous profile (THE MEYEROWITZ STORIES). This year, of all years, I just assumed that WONDER WOMAN was a shoo-in for a Best Picture nod, and maybe even one for Gal Gadot. But the pool of performances by actresses this year was just too rich, and I guess the one for New-Age Oscar-style pictures was too.

Certainly richer than I ever anticipated. The mock-annoyed first sentence above, when I first wrote it Tuesday morning, included Paul Thomas Anderson’s PHANTOM THREAD, which I also had not yet seen, perhaps the biggest surprise among strong showings among Oscar nominees— six nominations, including Best Picture, two more even than the more vocally favored GET OUT (itself providing a nice surprise on Tuesday morning). Well, I saw PHANTOM THREAD Thursday night, and now I’m even more surprised that it was included to such an emphatic degree. It’s a lush period piece of a sort, yes, and that certainly puts it in Oscar’s wheelhouse, but it’s also a bit more demanding and a lot more perverse than the films that usually worm their way into the high-profile slots and multiple nominations. 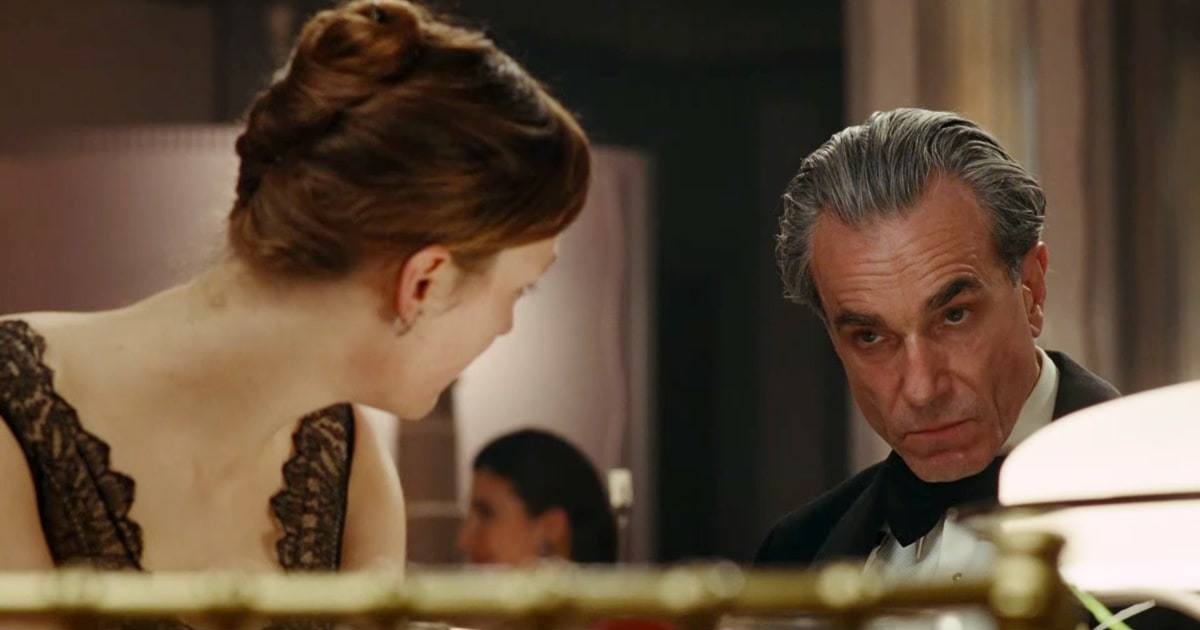 On top of all that, I absolutely loved it. Though I had come to look forward to seeing PHANTOM THREAD, I had most definitely tempered expectations given my reaction to Anderson’s two previous films, THE MASTER and the virtually unwatchable INHERENT VICE, a movie that is indulged by members of the PTA cult to a degree which encompasses sins of indulgence they would never tolerate in other circumstances or from most other filmmakers. (I was underwhelmed by THERE WILL BE BLOOD too, but I recognize that it’s a far better movie than either of the other two.) But PHANTOM THREAD is operating on an entirely different, richer level that left me as gobsmacked as WORMWOOD and SLACK BAY did. Anderson’s movie is light-years ahead of just about any filmmaking I saw this year, and maybe even any I’m likely to see in 2018. We’ll be talking and thinking about PHANTOM THREAD for a long time, and I certainly can’t stop thinking about it now.

Anderson eschews his usual camera and editing pyrotechnics and instead burrows into the material with a less ostentatious, more subtle, patient approach that some audiences have apparently mistaken for boring. But it’s the furthest thing from boring— what Anderson has created is an unmistakably alive work of art, a penetrating, unsettling and, oh, yeah, very funny examination of the lengths to which the demanding artist, Reynolds Woodcock (Daniel Day-Lewis), a revered dress designer in 1950s London, pushes his equally strong-willed paramour Alma (Vicky Krieps) in pursuit of a previous unattainable romantic fulfillment, in extremis. 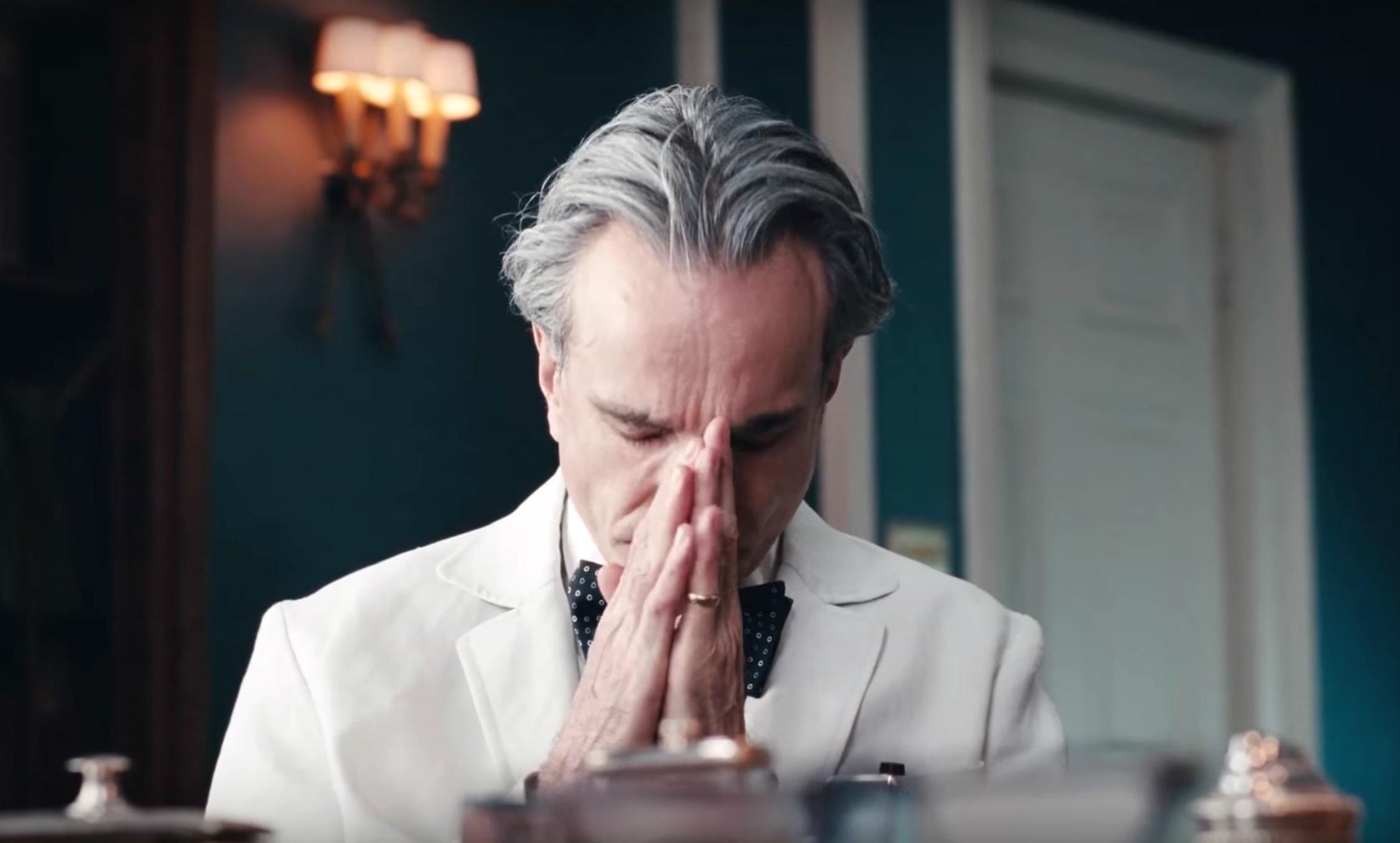 The movie is fetishistic and focused in unexpected ways throughout, and Anderson spins the narrative in such a way that I experienced PHANTOM THREAD, on its surface a period romantic drama with all the accoutrements and detail one might expect from a movie about fastidious, unforgiving control in a 60-years-removed world of fashion design, almost as if it were a thriller, like DRESSED TO KILL— deep into its running time, I felt as if I hadn’t blinked for 90 minutes. But it feels organic, not programmatic, with beauty constantly available to be unearthed and consumed, often in ways and forms that won’t be easily anticipated. (Even the movie’s late-period wrinkle, which casts the movie’s obsessiveness in an entirely unexpected light and which won’t even be hinted at here, develops in a way that will take even partially pre-spoiled audiences by surprise.) 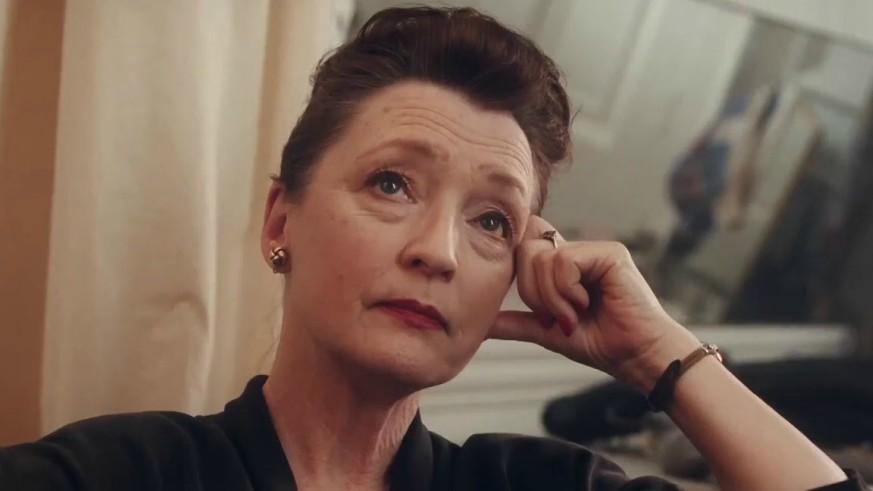 And the film is presided over not only by Day-Lewis’s insinuatingly good performance, and the surprising strength brought to the mix by Krieps, whoI’d never seen before, but most dominantly, and most pleasurably, by Lesley Manville as Cyril, Woodcock’s quietly imposing, steely-nerved sister, who takes it upon herself to keep her brother’s business, and proper appearances, operating smoothly within the realm of their needy, often neurotic high society clientele. Manville is working somewhere within the universe of Dame Judith Anderson’s Mrs. Danvers (that’s no spoiler, by the way— PHANTOM THREAD evokes REBECCA as a touchstone, but not a slavish homage), and she keeps her cards artfully, tantalizingly, spectacularly close to her conservatively coutured breast. But when she does lash out, Manville (and Cyril) has no use for histrionics. A scene midway through the film when she asserts her position to her brother is played near a whisper, and it’s infinitely more powerful for it. A lesser actor (and a lesser director) might have pitched this scene, and so many others, to the rafters, but Manville sharpens the blade on her measured cool to such a degree that it’s a goddamned wonder anyone could survive her icy gaze. I hope, come Oscar night, she steals that statue right out of Allison Janney’s universally presumed clutches, and gives her one if Cyril’s glares while she’s at it. Manville’s is easily the best performance of the five nominated actresses. It’s one of my favorites of the year, period. As is PHANTOM THREAD.

So here’s my new favorites list, revised from its original 11 to accommodate not only PHANTOM THREAD, but another movie that surprised me as much as any of the others on this list, making ultimately a tidy baker’s dozen of unmissable movies:

(The original list, with comments on each film and more, can be found here.

As for the rest of the nominees, on the Most Prominently MIA list: Martin McDonagh for Best Director, which effectively sinks THREE BILLBOARDS Best Picture chances— and as it seemed to be developing that juggernaut momentum that makes watching a show where everyone knows what’s going to win boring as hell, I’m almost kinda glad, even though I love the movie, warts and all.

Also MIA: SPETTACOLO and KEDI for Best Documentary Feature. The presence of SPETTACOLO is more wishful thinking on my part, but I would have thought that KEDI would be (forgive me) irresistible catnip to Oscar voters. May all those Turkish street cats slink their way into the bedrooms of said dismissive voters and steal their collective breaths! 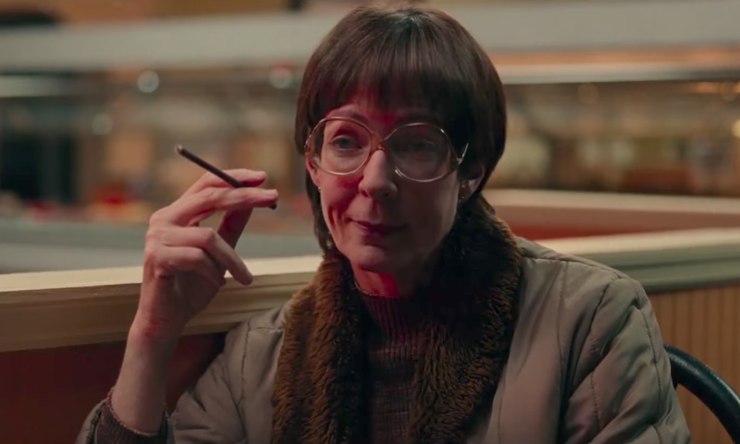 I will spend the month burning tea leaves and lighting incense in the hope that someone— Laurie Metcalf, Mary J. Blige, but especially Lesley Manville— knocks Alison Janney off her high horse as she trots toward an apparently inevitable win for Best Supporting Actress. I, TONYA is a showcase for things the actress has done a thousand times before, and always better, and it’s as one-note as it could possibly be. The hammering on that one note is abetted by the one-note writing. too Janney’s foul-mouthed Mrs. Bates act grows wearisome very quickly— she speaks to everyone, not just Tonya, in the same way in every situation, and the result is neither illuminating or amusing, but it’s close to insulting. (All that said, I’m okay with Margot Robbie among the nominees, but unfortunately there’s one other actress I wish were in her place– see below.)

What else? Well, THE BOSS BABY is in no way one of the five best animated movies of the year. The Academy has to find its way to COCO, or THE BREADWINNER.

I would have never guessed that it would be remembered, let alone so honored, so I feel pretty good about GET OUT making such a relatively strong show. I doubt it’ll win anything, but it’s presence at all would have been inconceivable just a few years ago. And there are those who, since Tuesday, have made pretty good arguments for Jordan Peele’s movie being the spoiler that brings THE SHAPE OF WATER and THREE BILLBOARDS to their knees. We’ll see! 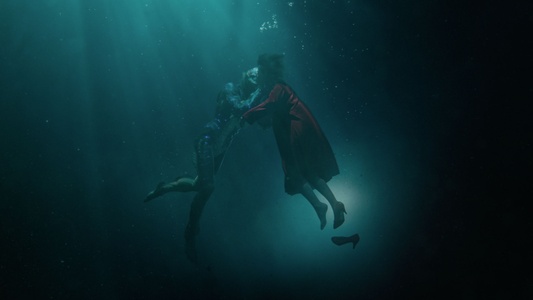 I like THE SHAPE OF WATER a lot, and as much as I love McDormand in 3BOEM it wouldn’t hurt my feelings at all to see Sally Hawkins win. That said, I hope that this year, like last, the awards are spread out more evenly and we can somehow avoid a SHAPE sweep.

BAM! Christopher Plummer snags a Best Supporting Actor nomination for ALL THE MONEY IN THE WORLD! The thing is, above and beyond the obvious “Fuck You, Kevin Spacey” factor, he deserves it. At various points I actually forgot that I wasn’t watching the real J. Paul Getty– even the shape of the man’s head was right on the money. 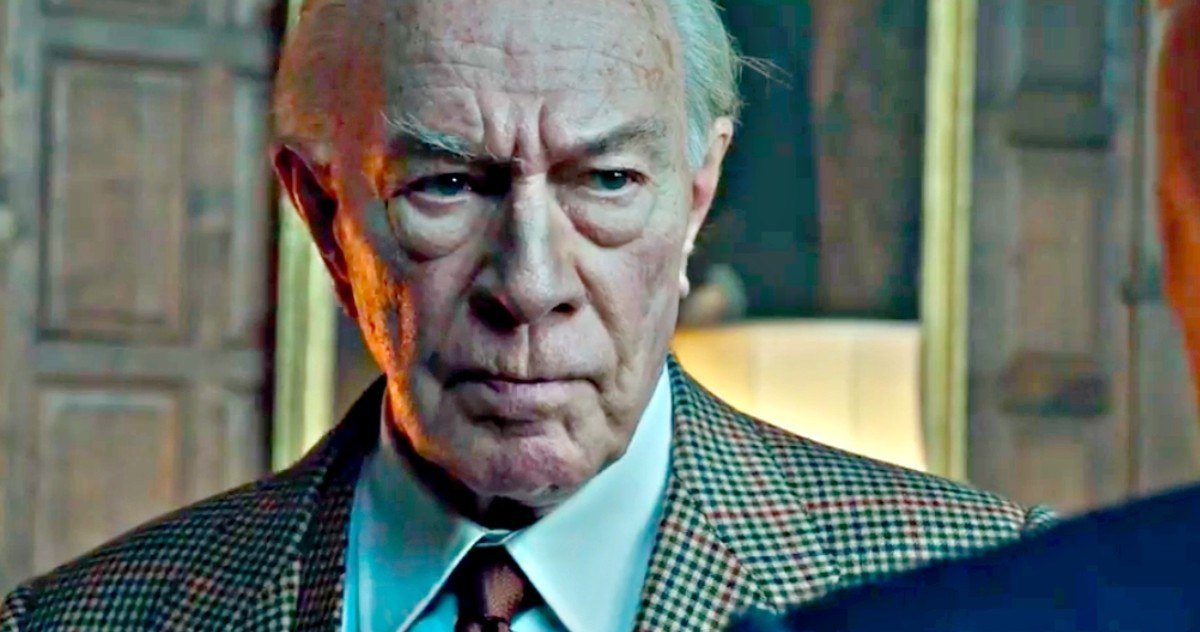 That said, maybe the year’s biggest snub (and maybe it isn’t even a snub, becuse did anyone think she’d really be nominated?) is Michelle Williams in that same movie. This woman has been turning in great work for a long time now, and this was a full-bodied, surprising, resonant performance, much more so than the one she was deservedly noted for last year in MANCHESTER BY THE SEA. One day, Michelle, one day…

I’m not surprised by James Franco’s absence, especially given the timing, just two days before closure if Oscar ballot goes, if the accusations against him. But even without that cloud, the Academy has a checkered history with Franco anyway, thanks to the epic blow-off of his hosting duties he delivered a few years back, and as uncomfortable as he looked at the SAG Awards he’d probably just as soon stay home anyway.

Some think that Roger Deakins will get a career award for BLADE RUNNER 2049, and that his work on that movie is somehow subpar for an unparalleled modern master such as he. I disagree with the latter and am not sure about the former— I think the newly diverse Academy may find the catnip of awarding the first female nominee, Rachel Morrison, for her excellent work on MUDBOUND (a movie most of us probably saw on TV!) too hard to resist. Hoyt Van Hoytema for DUNKIRK is a strong contender too.

And the best song category, with Mary J. Blige, Sufjan Stevens and “Remember Me” from COCO all included, seems a little more reputable, perhaps more listenable all around than in recent years. 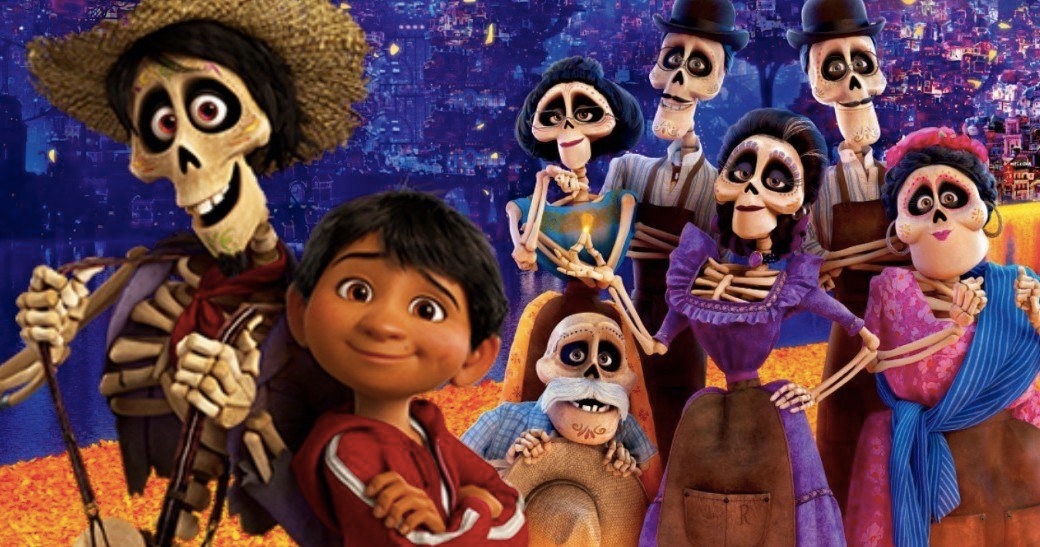 One thing’s for sure— the level of quality of the nominees in almost every category this year has helped me slough off the Oscar doldrums I felt creeping in as the new year started. I wasn’t sure I even wanted to watch the ceremonies. But the inclusion of PHANTOM THREAD, GET OUT, THREE BILLBOARDS, Christopher Plummer, Sally Hawkins, Lesley Manville and even presumptive conqueror THE SHAPE OF WATER, has left me hoping for upsets and wins that I can feel okay with at the end of the night.

All right, enough of my blathering. I’m off to see DARKEST HOUR. Then there’ll be nothing to do but sit and wait for Oscar night. Well, maybe I’ll go see PHANTOM THREAD a couple more times!