Shall we sing the praises of actress Marie Windsor? A self–assessed Queen of the Cheapies, she was anything but cheap, gracing some of the better films noirs and delivering some of the most deliciously acidic dialogue ever heard on screen. The woman doesn’t just have bedroom eyes, she has bedroom everything, and a wicked smile to go with it. 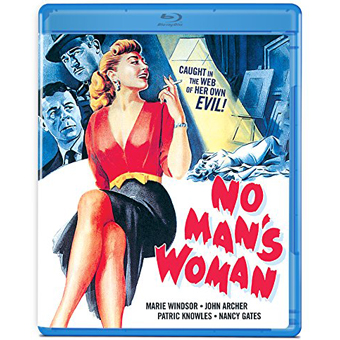 Marie Windsor is really something in Abraham Polonsky’s Force of Evil, lounging around in an effort to seduce John Garfield. There must originally have been more Windsor in the script, as I always expect her to come back later in the movie. But the lady’s real claim to fame are her two dialogue-heavy crime pictures, Richard Fleischer’s The Narrow Margin and Stanley Kubrick’s The Killing. In the second picture I can’t tell if Windsor is pacing her line delivery to match Sterling Hayden’s strange monotone cadence, or vice-versa. Screening audiences love the hardboiled dialogue, even if their approving laughter seems inappropriate — noirs didn’t leave dialogue gaps to allow for laughs to taper off. Windsor’s huge eyes and dark hair made her the epitome of the nightclub woman, as seen in (not big enough) parts in The Sniper and City That Never Sleeps. 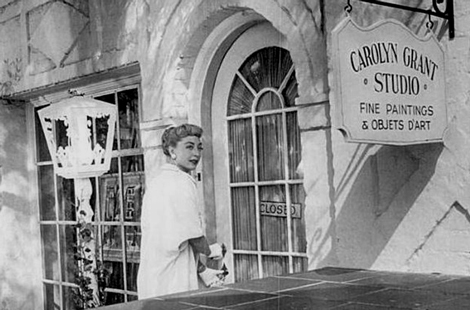 Moving into the 1950s, decent film roles became harder to obtain. Republic’s No Man’s Woman (1955) has little going for it except a couple of competent performances, but it must have seemed a good move at the time. Windsor receives star billing and her likeness is the main subject of all the advertising. It’s better than being magnificent in a tiny role in somebody else’s starring vehicle, such as her six minutes or so of screen time in Hell’s Half Acre, another Republic noir. And it’s way preferable to movies like The Jungle and Cat-Women of the Moon, fantasy longshots that can’t have done anything for Ms. Windsor’s résumè.

No Man’s Woman is a great title; add that to Marie Windsor and you have most of what’s good about the picture. The movie is a plodding whodunnit with a screenplay written to formula. Windsor has a ripe role in Carolyn Grant, a scheming art gallery owner who tries to manipulate three men to her selfish ends. Ten minutes into the picture, everybody we see has gained a credible motivation to murder Carolyn, who thinks she can get away with anything. She’s been separated from her husband Harlow (John Archer) for quite awhile, and enjoying his allowance. 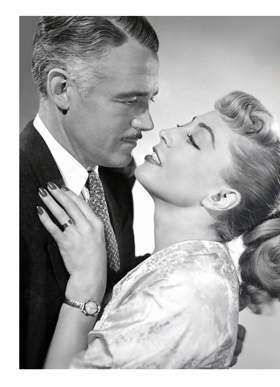 Harlow now asks for a divorce so he can marry his sweetheart Louise Nelson (Nancy Gates), but Carolyn likes the idea of owning half of her hubby Harlow, especially because his company is set for a big expansion. She puts a $200,000 price tag on Harlow’s freedom, and when he balks, ups it to $300,000. Meanwhile, Carolyn is carrying on an affair with art critic Wayne Vincent (Patrick Knowles). He’d like to get serious but she just wants him around to help her sell her paintings through his dishonest newspaper column. What she really wants is the handsome young fisherman Dick Sawyer (Richard Crane), the fiancé of her assistant, Betty (Jil Jarmyn). Carolyn maneuvers everyone with lies and trickery to get Dick out on his boat, and break up his engagement. When a murder goes down right in Carolyn’s swanky art gallery, the killer could be anybody.

At first the Carolyn Grant role seems as if it were written for Joan Crawford, as a follow-up to Republic’s Johnny Guitar. Carolyn’s blithe faith in her ability to warp people to her whims certainly fits in with the characters Crawford was playing, especially the part where Windsor tries to seduce the younger boat owner. (Actually, actor Crane was one year older than Marie.) Beyond mere predictability, John K. Butler’s screenplay has real weaknesses. Harlow Grant claims he has no grounds to sue Carolyn for divorce, when he ought to know her well enough to reason that she must be seeing other people while still married to him. Carolyn’s tricks wouldn’t work in junior high school, as the people directly affected by her lies have full contact with each other, and are sure to compare notes. Thus, when Betty takes Carolyn’s word over that of her boyfriend, she seems a fool.

The second half of the picture mainly follows Harlow’s attempt to extricate himself from a murder rap. Everybody else has lied to the cops to avoid embarrassment of one kind or another. There’s no particular tension, even when the innocent Louise finds herself face to face with the killer, who must now kill her to remain undetected.

No Man’s Woman plays out on a couple of okay sets. It wants to be a taught suspense film but the script isn’t good enough, and Franklin Adreon’s direction is all but non-existent. The story is told in dull angles, with little sensitivity toward the actors. They do quite well, mostly underplaying in the face of weak lines and a lack of pace. Republic had a bad habit in the 1950s of making potentially good pictures that barely played better than slack TV work of the time. 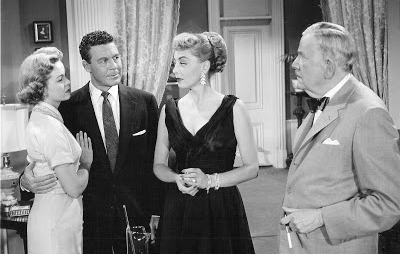 Marie Windsor has little choice but to overplay Carolyn, to make the role interesting. Not Joan Crawford overcooked, but probably more emphatic than Windsor would like. She does nothing wrong, but the character as written and directed is just wicked, with no attempt to explain how she got that way. Carolyn keeps up the vamp act, but really gets no response — Richard Crane’s Dick shows no interest. The movie hasn’t enough life. Russell Rouse’s Wicked Woman has Beverly Michaels as a similar conniving woman. It’s sleazy and cheap, but also carries a spark of excitement that No Man’s Woman lacks.

The other actors are just fine. Richard Crane looks good but seems a fool for not politely telling Carolyn to take her unwanted romantic moves elsewhere. We monster movie fans keep waiting for Richard’s character to start sprouting alligator scales. Louis Jean Heydt pulls detective duty, strolling through the generic investigation scenes. Squeaky Percy Helton’s superintendent is underused. The actor that fares best among the support folk is gorgeous, personable Nancy Gates. She’d rack up an enviable record of excellent performances big and small (The Atomic City, Some Came Running, Comanche Station, many more) without ever becoming a major star.

No Man’s Woman is stuck on Republic’s sound stages for most of its running time, but it gives us glimpses of a couple of standout Los Angeles locations. The first shot sees Marie Windsor driving a convertible down Cahuenga Blvd toward Hollywood; the Mullholland Drive Bridge is visible in the background, but not the ‘Cahuenga Freeway’ below it, a glorified parkway that right about this time was redubbed the Hollywood Freeway. That bridge is used as the ‘Santa Mira’ Bridge for the nighttime conclusion of Don Siegel’s Invasion of the Body Snatchers, with Kevin McCarthy yelling, “You’re next!”

Anybody who ever attended UCLA or a movie in Westwood will recognize the little art nook where Carolyn’s gallery is located — it’s on Glendon just two blocks up from Wilshire. Views of cars pulling to the curb show a view over the rooftops, where I believe we can see the tall tower of the Fox Village Theater in the background. The view is a bit hazy, and it does seem rather close, but I can read ‘Fox’ on the tower. 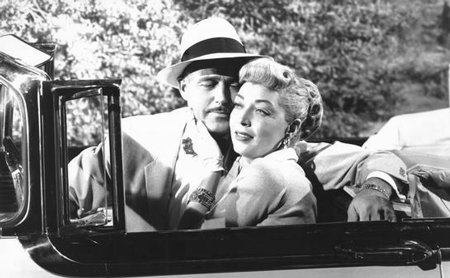 Olive Films’ Blu-ray of No Man’s Woman is a pristine HD encoding of this plain-wrap B&W picture, given the full benefit of Republic’s very good technical resources. The images are handsome, if not particularly artistic, and the soundtrack clear. The movie hasn’t been easy to see for quite a while. Fans willing to give Marie a chance will not feel cheated by the quality.

The cover image is original ad art playing up the leading lady’s sex appeal. Along with the lurid title, Windsor’s come-hither smile must have lured some walk-in business into the theaters in 1955.