Modern spy movies have nothing on this Brit thriller produced just as war broke out — Rex Harrison, Margaret Lockwood and Paul Henried clash with Nazi agents, and risk a daring escape to Switzerland. The witty screenplay is by the writers of Hitchcock’s The Lady Vanishes and the director is Carol Reed, in terrific form. 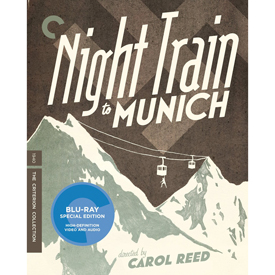 Alfred Hitchcock’s successful series of 1930s spy chase thrillers — The Man Who Knew Too Much; The 39 Steps — came to an abrupt end when he departed for the greener pastures of Hollywood. But some of England’s most creative writers and directors were already taking up the slack. As war broke out on the continent Michael Powell and Emeric Pressburger contributed the interesting espionage intrigues The Spy in Black and Contraband. Sidney Gilliat and Frank Launder, the screenwriting team behind Hitchcock’s superb The Lady Vanishes, followed up with the exciting, spirited wartime thriller Night Train to Munich, directed by the talented Carol Reed.

Produced before England entered the war, The Lady Vanishes was obliged to cloak its German villains as agents of a fictitious European nation. Night Train to Munich calls out the Nazi aggressors by name, loudly. Clearly intended to reprise the winning chemistry of Hitchcock’s hit, the feel-good espionage yarn brings back Margaret Lockwood to serve as its nominal star and the comedy team of Basil Radford and Naunton Wayne to revisit their popular roles as the complacent cricket fans Charters and Caldicott. Gilliat and Launder’s preposterous but engaging storyline takes many clever turns. While not quite the classic that is The Lady Vanishes, Night Train is a bright entertainment that surely succeeded in cheering London audiences suffering under the Blitz. 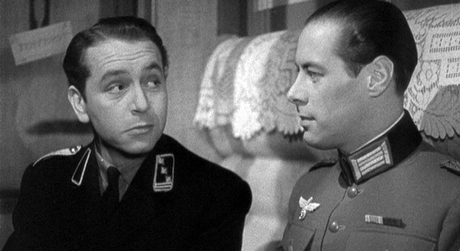 The film’s story begins a couple of years earlier, just as Germany is invading Czechoslovakia. Margaret Lockwood is Anna Bomasch, the daughter of an important Czech scientist. He flees to England but Anna is captured and locked away in a concentration camp. She escapes with the help of fellow patriot Karl Marsen (Paul von Hernreid, a.k.a. Paul Henreid of Casablanca fame) and is happily reunited with her father in England. British agent Gus Bennett (a young, roguish Rex Harrison) specializes in false identities. He masquerades as a pleasure pier singer while safeguarding the Czech refugees, only to find both of them snatched back to the Reich from under his very nose. Officially withdrawn from active duty, Bennett parachutes into Germany, disguises himself as a high-ranking Nazi and bluffs his way through military security. He attaches himself to the Bomasch case by pretending to be Anna’s lover, and accompanies the father and daughter on an overnight train trip to Gestapo headquarters in Munich. A pair of fussy English travelers Charters and Caldicott (Radford & Wayne), incensed at the “bad manners” of the Germans, deduce that Bennett is really an English spy and tip him to the fact that he’s about to be arrested. With the help of these two new allies, Bennett improvises a desperate plan to spirit Anna and her father across the border to neutral Switzerland.

Night Train to Munich moves so quickly that it elides most of Anna and Karl’s perilous flight to England. After barely a few hours to prepare, Bennett simply shows up in Berlin in full Nazi regalia, including an ostentatious monocle. Armed with only a letter of introduction and a glib tongue, he penetrates a high security Nazi establishment as if he belonged there. Of course, Rex Harrison’s charm makes all these shenanigans possible. It also helps that the Nazis behave like bureaucratic functionaries, too impressed by his manner to check his credentials. Gilliat & Launder’s story begins with a montage of Nazi aggression and a prologue in a bleak concentration camp, but the tone lightens when Harrison’s dashing Bennett begins making fools of the treacherous Nazis. 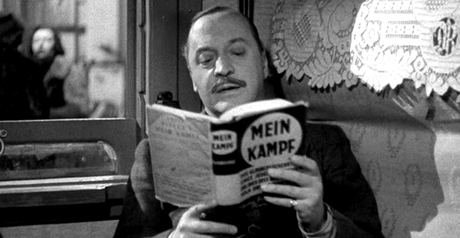 On the surface this is an escapist fantasy, the kind in which the hero and heroine must pretend to be lovers and spend a provocative night together in a hotel room. American movies during the earlier part of the war sometimes trivialized the Nazi threat in the interest of airy fun, with big stars making fools of der Führer’s goonish officials. But Night Train was filmes in the year that Germany began bombing London. The story is comic in tone, but maintains a constant level of tension. Gus Bennett’s spy mission is an off-the-books desperation ploy to save the day, along with his own reputation. He’s a man alone surviving on his wits and charm. Rex Harrison is an interesting proto-James Bond, a supremely confident and cool-headed chameleon, the English gallant that would accept failure and a firing squad with a shrug, as if he had lost a hand of poker. Bennett’s personality also carries a streak of sexual cruelty; he’s far too vain to flatter the gorgeous leading lady. Margaret Lockwood receives top billing but her Czech refugee Anna isn’t half as interesting as her holiday traveler in The Lady Vanishes. For a character that spends the entire movie being kidnapped or escaping, Anna Bomasch hasn’t much to do except look beautiful and fret.

The movie breaks the ‘inspired’ barrier the moment that the hilarious deadpan comics Radford and Wayne enter the picture. It must have been a matter of patriotic continuity: their Charters and Caldicott are still cricket fans puzzled by the fact that Berlin newsstands don’t carry the latest issue of Punch. They maintain formalities at all times, and can’t understand why their English passports don’t protect them from petty inconveniences. An hilariously pushy German Station Master (Irene Handl) rudely hustles them about the train platform. War between Germany and England is about to break out, but they’re more concerned that they’re losing their sitting compartment to last-minute military travelers. Charters and Caldicott are initially inclined to mind their own business, but when it looks as if Gus Bennett will be arrested they undergo a change of heart. One too many German insults is a big persuader as well. A minute later they’ve donned German uniforms and are helping Gus with his wild scheme to hoodwink the enemy on its own turf. 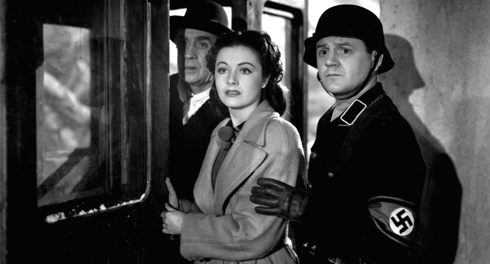 Carol Reed keeps the script’s humor front and center. We’re too busy listening for the next joke to be concerned that Night Train has some of the most un-German Nazis ever. Many don’t even affect accents. Had the exaggerated heel-clicking degenerate stereotypes not yet been established? Felix Aylmer is a deep cover Nazi in England, masquerading as an optometrist. Frederick Valk of Dead of Night, here billed as Fritz Valk, makes a convincing Gestapo villain for the exciting mountain car chase to Switzerland.

For the finale director Reed concocts an exciting gun battle on an aerial tram that conveniently crosses the border to the neutral country. Even Alfred Hitchcock would be daunted by the implausibilities in this scene, as the Germans have left the obvious escape route almost completely unguarded. Harrison is seen to fire at least 25 shots from his pistol without reloading. He then makes a highly unlikely mid-air leap from one tram car to the next. Although filmed on fairly artificial studio-bound sets, with an over-use of barely convincing miniatures, Carol Reed’s superior direction maintains a high degree of suspense.

The movie ends with a title card asking viewers not to spoil the film’s surprises for other viewers. Paul Henreid’s clever character returns to the story in a capacity that won’t be revealed here. Henreid becomes a conflicted romantic rival for the attention of Lockwood’s lady in distress, and director Carol Reed sees to it that he remains a somewhat sympathetic character. As most viewers will associate Paul Henreid with his highly romantic American roles (Now, Voyager), watching him suffer as Rex Harrison gets the girl creates an odd sense of injustice. Carol Reed would generate the same unease a few years later with matinee idol Joseph Cotton, in his masterpiece The Third Man.

With its witty repartee and the patriotic derring-do, Night Train to Munich was one of the most popular English films made during the war. That stunt jump during the Alpine conclusion was surely an inspiration for the wild spy mission movie Where Eagles Dare, made 28 years later. 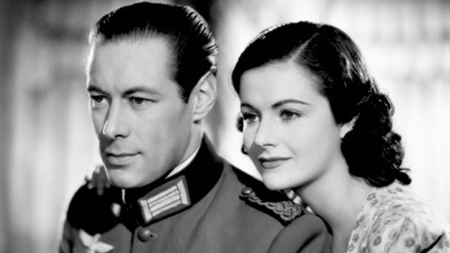 The Criterion Collection’s Blu-ray of Night Train to Munich is a clean HD encoding of their fine DVD release from six years ago. I can’t quite remember how dull those old TV prints of the American version (‘Night Train’) were back on TV; Criterion has spoiled us with so many polished restorations of vintage English films that we forget that our original import copies sometimes had bad audio, etc..

The extras are also the same as before, but they’re still excellent. Philip Kemp’s astute insert essay has been retained, but the big draw is a lengthy docu with film scholars Peter Evans and Bruce Babington. It’s called a conversation, perhaps because it follows their discourse instead of a formal thesis outline. Night Train to Munich needs a lot of context to explain details in the political climate, reference to class consciousness, etc. We also get a better understanding of the use to which Basil Radford and Naughton Wayne were put — as morale-building decent chaps that were there before hostilities broke out (The Lady Vanishes) and step up to the challenge when a fellow Englishman needs help. The Gilliat & Launder writing team receives a lot of quality discussion time.