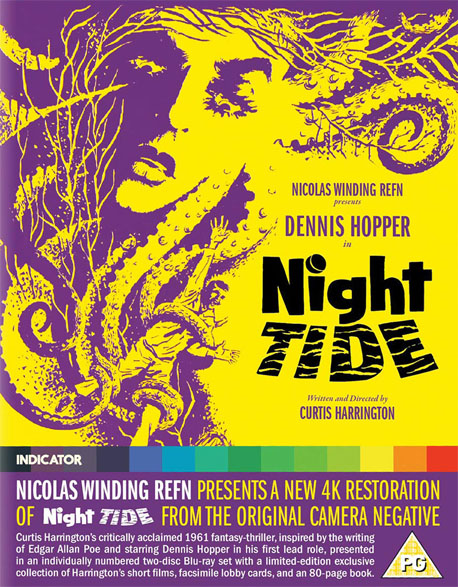 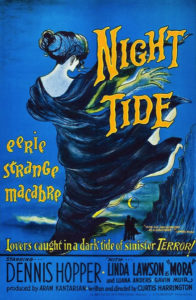 During the early fifties, an anxious era that leaned on fanciful songs like Faraway Places, Beyond the Sea and Robert Maxwell’s Ebb Tide, Curtis Harrington wrote a similarly dreamy fable called The Girl from Beneath the Sea. The 34 year old director’s script was finally produced in 1960 and premiered as Night Tide at the Spoleto Film Festival in 1961. Thanks to Filmgroup, Roger Corman’s distribution company, the movie reached American theaters in 1963. Instead of the windswept romance of Maxwell’s song, ticket buyers were treated to a fatalistic thriller with the unpredictable qualities of a New Wave film.

Dennis Hopper plays Johnny Drake, a navy recruit from the arid climes of Oklahoma. Though he looks seaworthy in his white uniform and cap he still seems pretty landlocked, ambling through the beachfront tourist traps with the wide-eyed wonder of a greenhorn’s first night in Time Square. That doesn’t stop him from wandering into a little jazz club and approaching the first single woman he sees, a raven-haired sphinx in white named Mora (played by Linda Lawson). That very tentative friendship becomes a  love affair, a heartwarming development that takes a Hitchcockian turn when Johnny learns her secret. Mora’s last two boyfriends died under sudden and mysterious circumstances. 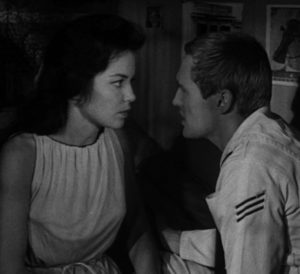 There are other reasons for Johnny to tread carefully – Mora makes her living as a mermaid at a strangely barren seaside carnival – the rickety boardwalks and spare storefronts give the the park a ghostly atmosphere that extends beyond its haunted house ride. And Mora lives – quite contentedly – above the fair’s merry-go-round (Alvy Singer could warn Johnny about the perils of growing up under a roller coaster). There are enough oddballs in the ethereal beauty’s orbit – the transplanted Brit who runs her carny act, a no-nonsense fortune teller and the mysterious doyenne who haunts her every footstep – that both Johnny and the audience can be forgiven their apprehensions. In his most anxious moments Johnny dreams of Mora transforming into a sea creature and smothering him in its tentacles. Is Mora the offspring of a mythological race – a bona fide siren? 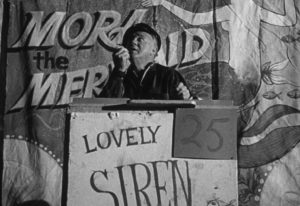 The answer is both touching and slightly ludicrous – but thanks to Floyd Crosby’s evocative black and white photography and David Raskin’s light and lively jazz score, Harrington’s balmy film has a restless undercurrent. Some of that restlessness is courtesy of Hopper himself who was 24 when Night Tide was produced – it had been five years since Rebel Without a Cause and the jittery young actor was spending much of his time on the small screen when Harrington came calling. Hopper does a kinder-gentler variation on his JD from Rebel, still a skittish outcast and still able to mesmerize audiences without breaking a sweat. 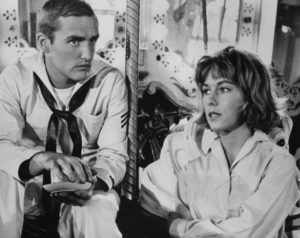 Night Tide was Harrington’s first feature length film and his direction is the natural outgrowth of the early short films that first gained him attention in Hollywood. The movie is well edited by Jodie Copelan but Harrington’s short films, in particular The Four Elements, an industrial film teeming with dynamic visuals, indicate the director framed his work with montage in mind – and he’s quite good with actors. Gavin Muir as the carnival barker with a tale to tell and Marjorie Eaton as a stereotypically eccentric fortune teller add a bit of spice to the story and Luana Anders brings a dose of sunshine to the oddball atmosphere – but it’s Harrington’s commitment to his fish-out-of-water story and Crosby’s cinematography that gives the film its unique allure.

Thanks to director Nicolas Winding Refn’s one-man crusade Crosby’s luminous work is given new life on the splendid Blu ray release from Powerhouse/Indicator. Along with Night Tide’s restoration Refn has taken it upon himself to bring a number of cast off movies back to life – most with a 42nd Street bent including nudies like House on Bare Mountain and adult-themed exploitation like Satan in High Heels.

Indicator has put together a fine two-disc package for Harrington’s one-of-a-kind debut. The movie is presented on the first disc and the second features a selection of Harrington’s short films that brought him to the attention of the French Cinematheque and finally to writer/producer Albert Lewin at MGM where Harrington made his first real splash.

The official line up from Powerhouse/Indicator’s site: