Nunnally Johnson hands us a well-written spy & hostage drama set in Cold War Berlin, with plenty of intrigue and good humor to boot. Gregory Peck is the troubled negotiator and Broderick Crawford a Yankee galoot sticking his nose where it isn’t wanted. This one has been out of reach for quite a while — and it works up some fun suspense. 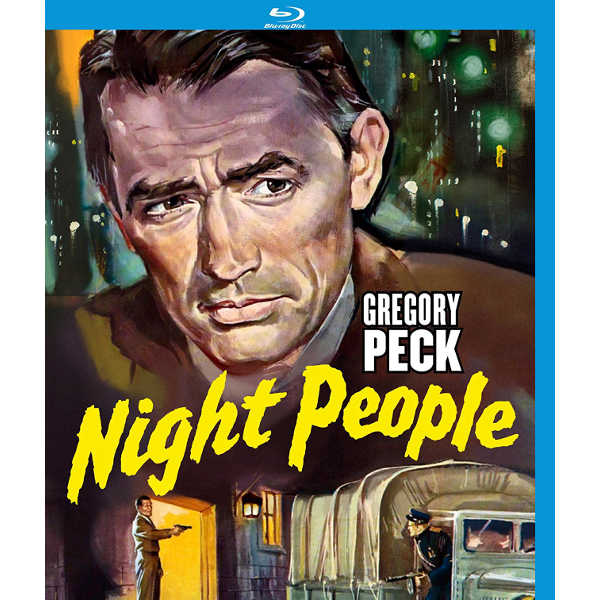 An intelligent cold war thriller about distrust and passive aggression across the East-West divide in Berlin, Nunnally Johnson’s Night People has been out of circulation for some time. I remember seeing it only on unwatchable pan-scan TV prints. It’s early CinemaScope and therefore at the wider 2.55:1 aspect ratio. In 1954 20th Fox was loading its C’Scope schedule with action pictures and travelogues. Night People has its share of foreign scenery but is really a close-quarters tale of diplomatic skullduggery and grim espionage. Top Hollywood writer-producer Nunnally Johnson had a knack for popular, intelligent and progressive film hits. His screenplay is carefully crafted and he has Gerd Oswald helping him on production issues. But it’s also Johnson’s first outing as a director. He, um . . . improved as he went along.

In West Berlin, young occupation soldier John Leatherby (Ted Avery) no sooner says goodnight to his chaste local date Kathy Gerhardt (Marianne Koch) than three men seize him on a dark street. When it becomes clear that Leatherby has been spirited to the Russian sector, an international incident is all but assured. Colonel Steve Van Dyke (Gregory Peck) is under immediate pressure from the State Department’s Fred Hobart (Casey Adams). Then the kidnapped soldier’s industrialist father Charles Leatherby (Broderick Crawford) shows up swinging his weight around, criticizing the lack of action and implying that he could secure his boy’s release by offering a simple bribe. The Colonel puts Leatherby in his place, and then invites him along to see what’s involved in such a deal. Van Dyke’s usual contact with the Russians, his opposite number in fact, appears to have ‘disappeared’ as well and it is feared that the man is under house arrest.

This forces Van Dyke to rely on ‘Hoffy’ Hoffmeier (Anita Björk), his prime unofficial contact with the Eastern sector. Hoffy was once Van Dyke’s lover; he’d like to heat that up again but she’s being standoffish. When the Colonel finally does hear of a possible deal, he’s not happy — Hoffy suggests that the Russians may trade John Leatherby for the Schindlers (Jill Esmond and Anton Färber), former Allied agents now living in poverty. She was a spy for England and the Nazis gouged out his eyes. Fearing they’ll be traded back to their old enemies, now working with the Russians, the Schindlers take poison. Van Dyke rushes them to the hospital and poses a question to Charles Leatherby: to get John back, how far should we go to trade with the non-enemy ‘enemy’? Should we be negotiating at all?

As a screenwriter Nunnally Johnson walks a fine political tightrope. For a while we think that Night People will be about a dogged negotiator’s efforts being ruined by Broderick Crawford’s ugly American, especially when Charles Leatherby comes in swinging, ignorant and loud, throwing his weight around with the foreign press. But the story soon takes a wider viewpoint. Leatherby has a wife with a bad heart, and she’s already lost one son in the war.

Call it kidnapping, hostage-taking or general harassment, the arresting of foreigners to express a political grievance has been going on since the days of Hammurabi, when emirs displayed their ire by sending only parts of captives back home. Our military commander really has his hands full with this disappearance — Leatherby senior makes so much noise that a quiet negotiation is going to be difficult. Col. Van Dyke knows that the Leatherby kid was purposely snatched to trade for someone the Russians want, perhaps one of their own operatives captured by the U.S. forces. There’s no East German phone to call to secure John’s release, so Van Dyke has to rely on his surreptitious contacts, like the capricious Hoffy. He meets her at an outdoor plaza, but she seems unusually downcast, and resists his attempts to recall their past romance.

Berlin’s four occupational sectors were reduced to two in 1947, with the English staying behind to lend intelligence expertise. A lot of conflicting information is floating around, and plenty of people like the Schindlers are living under assumed identities. As it turns out, the Brits have some distressing news for Van Dyke regarding his personnel.

The big plus in Night People is Nunnally Johnson’s deft screenplay, which admits that the sticky situation in Berlin requires a man in Colonel Van Dyke’s position to play dirty, too. Gregory Peck does his best to make his Colonel fallible, all but conceding defeat at least twice. But seeing as it’s Peck we know different. Assisting Van Dyke is his secretary Ricky Cates, played by the interesting Rita Gam of The Thief and Saadia. One scene is fairly confusing — Peck is playing cards with some friends in one room, and at one point he walks into the next where Ricky appears to be in bed. Where are they?  We hear that the card games take place in a Press Room somewhere, but this looks like Van Dyke’s own apartment. Could they be borrowing Ricky’s apartment? How personal a secretary is Ricky, anyway?

Lighter assistance is provided by Buddy Ebsen as Van Dyke’s aide and dog-robber Sgt. McColloch. The Sarge drives, fetches and provides some needed reactions without being used as an audience surrogate exposition device.  McColloch has various girlfriends stashed around town, a A Foreign Affair– like reminder that the GI’s in Berlin can’t all behave like choirboys. The second half of the picture unspools in an army hospital. The sergeant repeatedly ducks into a staff room to check on a baseball game, or trades quips with Major Foster (Walter Abel), a staff doctor who colludes with Van Dyke in hoodwinking the Russkis. Dr. Foster spends his time cadging cigarettes from people, a gimmick that writer Johnson makes seem fresh.

Frau Schindler is a sweet lady seen only in wide shots, playing the piano to earn a living. It looks like she’d rather live in poverty with her sightless husband than accept help from the English, for whom she reportedly spied; whatever the story, it doesn’t put the English in a good light. She’s played by Jill Esmond, who twenty years earlier starred in Alfred Hitchcock’s The Skin Game. Young German actress Marianne Koch (A Fistful of Dollars, Spotlight on a Murderer) looks like a teenager. The interesting Anita Björk isn’t given the best vehicle for her American debut; I’m not sure she starred in another English-language picture. She looks more attractive in her best-known movie Miss Julie (1951), a genuine classic.

Nunnally Johnson suggests that nasty ex-Nazi intelligence men are working for Russia, which conflicts with East German claims that only the West employed ex-SS and intelligence men from the former Reich. Peter van Eyck, a Hollywood veteran even during the war, is Sergei Petrochine, an efficient operative on the Colonel’s staff. Van Eyck’s Sergei speaks and acts like a German. What’s with that name, anyway? Since several other people in the course of the story use ‘invented’ identities, is it possible that Sergei is an ex Nazi? We also wonder about the fact that Van Dyke and the diplomats never talk about dealing with East Germany, only the Soviets. The Soviets became hostile adversaries, especially after the standoff of the Berlin Airlift. But Night People all but denies the existence of East Germany as anything but occupied Soviet territory. Of such things was the Cold War made. If everybody could have waited 45 years for the Berlin Wall to go up and then come down again, all this rancor could have been avoided.

Most spy movies use Checkpoint Charlie between East and West Berlin as the preferred place to conduct a hostage swap. This show ends with an East German truck coming all the way to a U.S. Army hospital. We assume that overpowering the guards and seizing John Leatherby is not a good idea if the tense international peace is to be maintained. Van Dyke gets ready to hand over the elderly ex-English agents.

The movie does have one serious downside, Nunnally Johnson’s first job of direction. He hasn’t a clue where to put the camera, and the cameraman Charles G. Clarke should have stepped in to help more. Johnson continually leaves the frame half-empty in dialogue shots that place actors at extreme ends of the screen. This leaves desks, doors, and a map on a wall as the compositional focus of too many shots (see the top, large photo). Close-ups are avoided whenever possible, leaving the show with no beauty shots of its actresses. Johnson’s choice of shots is so poor that we have to wait through half of Anita Björk’s first scene to get a good look at her. Thankfully, the added resolution of HD lets us see the actors’ expressions even when they’re not large in the frame. When one thinks of how flexible and, well, cinematic Fox’s pictures had become just before CinemaScope was introduced, we’re happy that this awkward transition period only lasted a couple of years. Other directors in 1954 were already beginning to be less intimidated by the wide screen.

The Warp-O-Scope optics of this early CinemaScope film are pretty extreme. People at the left end of the frame are visibly squeezed, not a little but a LOT. A dizzying effect happens when the camera pans on exterior shots: the scenery looks like it’s rolling over bumps, to end up squeezed at the extreme left. It’s my theory that, as Bausch & Lomb made improved replacements, these early C’Scope lenses were sold off to low budget outfits. I think that’s why some later shows like The Day of the Triffids share the same optical issues as the earliest ‘Scope pictures.

Night People is a clever spy story with a good twist, that isn’t diminished by being predictable. In 1954 it probably was a much bigger surprise. Nunnally Johnson’s good script and the fine performances maintain high interest and amusement — and Johnson’s take on the tense political situation is well observed, too. Sixty-three years later, its attitude doesn’t seem dated.

The KL Studio Classics Blu-ray of Night People is a satisfying disc presentation with a sharp scan and excellent color. The show was unavailable (to this viewer) for so long that I wondered if it had serious rights issues. Also please note that the images I’ve grabbed from the web do NOT reflect the quality of the Blu-ray, which is much better.

A teaser trailer included only uses still art. The three children of Gregory Peck — Carey, Tony and Cecilia offer a remembrance of their famous actor father. Night People has been hard to see (for this viewer) for a long time, so long that I assumed some kind of rights problem must have been involved. Now that it’s finally here, it’s welcome. On a double bill with Henry Hathaway’s B&W, flat Diplomatic Courier, it would provide an excellent example of Hollywood’s awkward ’50s transition to widescreen movies.