Paul Mazursky’s affectionate memoir of the New York bohemian life circa 1953 has a feel for the milieu and an honest appraisal of the kooky culture therein: artists, actors, users, takers, sweethearts, neurotics and phonies. Lenny Baker’s main character may have an amorous relationship with his girlfriend Ellen Greene, but his strongest connection is with his overbearing mother, played to perfection by Shelley Winters. She was a Best Supporting Actress nominee for The Poseidon Adventure but not for this?  Honestly. 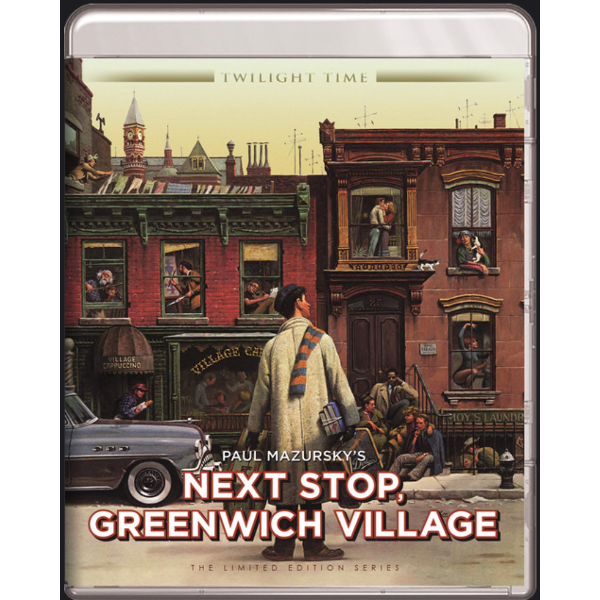 Fans of Paul Mazursky haven’t forgotten his series of insightful, mellow romantic semi-comedies from the ‘seventies. But has the general public? Blume in Love and Harry and Tonto sit warmly on the memory, and his 1978 An Unmarried Woman is a remarkable picture ever about the inequity of romantic roles between the sexes.

Paul Mazursky’s most affectionate picture may be Next Stop, Greenwich Village, his autobiographical ode to New York’s bohemian scene in the early 1950s. The funny adventure covers the year or so between ‘Larry Lapinski’s’ decision to move to Greenwich Village from his Brooklyn family home, to his migration West to play in a ‘major motion picture.’ In strict terms Mazursky seems to have skipped the sideways detour of his first film appearance, in Stanley Kubrick’s oddball art picture Fear and Desire. The major film referenced is MGM’s Blackboard Jungle. Fifteen years further down the road, Mazursky emerged far more successfully as a writer-director. His bright script provides witty and affectionate roles for a number of amusing young actors, even if Shelley Winters takes top honors as a captivating, maniacally possessive Brooklyn mother.

Immediately after graduating from college, Larry Lipinski (Lenny Baker) tears himself from the grasping fingers of his overly-emotional mother Fay (Shelley Winters), slaps a beret on his head and joins the artistic hopefuls struggling (or lingering) in Greenwich Village. In no time at all he’s part of an aimless but convivial clique. Connie (Dori Brenner) is concerned for Anita (Lois Smith), who is turning into a cat lady and continually threatens suicide. Robert (Christopher Walken) is a suave womanizer with a manufactured public face. The gay Bernstein (Antonio Fargas) hides his insecurity behind an elaborately faked personal back story. Larry also finds a lover. The free spirited Sarah (Ellen Greene, so good in Little Shop of Horrors) refuses to commit to Larry because she’s searching for herself — which means she’s seeing other lovers as well. Larry takes a job in a Deli (Owner: Lou Jacobi) and agonizes through acting classes impatient for his innate genius to assert itself. He does feel more secure at auditions than the uptight ‘serious actor’ Clyde Baxter (Jeff Goldblum). Larry’s biggest problem is his mother, who sees nothing wrong with dropping in unannounced at inappropriate times, like when Larry and Sarah are in bed together. 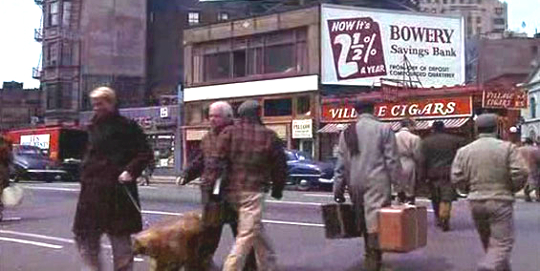 Next Stop, Greenwich Village is the story of ‘fifties New York bohemia in a nutshell, with roach-filled unfurnished apartments, rent parties, acting classes and plenty of odd characters hanging around in bars. Starving artists solicit for abortionists. A ‘colorful’ old guy hawking poetry tells his customers that “In the winter I’m a Buddhist, in the summer I’m a nudist.” Larry’s boss at the health food store essentially practices medicine without a license, prescribing his diet vegetable drinks as a cure-all. Larry’s screwy collection of friends drift in various states of self-delusion and depression, yet we know that for most of them there will be a light at the end of the tunnel. The people on view are far too individualized to be stereotypes.

Mazursky affectionately lampoons his origins and his ambitions without undue psychoanalysis. We aren’t aware of any personal demons being exorcised. He’s crazy about his girlfriend Sarah but can’t hold her. Her flighty nature makes it easy for him to concentrate on his own career fantasies. His Marlon Brando imitations and Oscar acceptance speeches are all too sincere, and would be just as touching if we knew that the kid squeaking them out didn’t continue to a stellar career. Larry’s daydreams are full of acting disasters, but when it comes time to pitch himself for the part of a young punk for a Hollywood picture, he knows exactly what the casting director wants to see. Ninety percent of Larry’s effort seems directed to separating himself from his mother’s clutching arms. Shelley Winters is delightful as Fay, the screamer-mom incapable of understanding why Larry would choose to become a bum living in a rat-hole of an apartment. Bringing him bags of food including a chicken (!) to cook, she refuses to listen to reason, or to anything for that matter. Larry and Sarah try to tell Fay about their love live, but she becomes so hysterical that they instead reassure her with comforting lies. Fay’s patient husband (Mike Kellin) cannot get her to realize that Larry is an independent grown man. Clueless or not, Fay is also the life of the party, something that disturbs Larry. She’s a natural. He imagines her acting and dancing up a storm, succeeding grandly where he failed.

Actually, both as the character and ‘as herself’ as an actress among actors, Shelly Winters really shows everyone how it’s done. We can’t help but recall that Winters has likely seen and done most everything. It helps the storyline for Larry to be bothered by her verve and talent — what’s left for him?

Ellen Greene shows a wonderful spirit and Lenny Baker great promise. Sadly, he’d die of cancer in only a few years. Christopher Walken is impressive as an emotionally distant pal, and the late Dori Brenner shows a bright personality with her thoughtful, concerned character Connie. Antonio Fargas receives the plum role of a party personality who has has reinvented himself as a strange kind of bon vivant. We instantly think of the man immortalized by Shirley Clarke in Portrait of Jason.

The beloved Lois Smith (East of Eden, Five Easy Pieces) makes the suicide-prone Anita a complex entity with just a few minutes on screen. Jeff Goldblum scores a solid appearance. The late Vincent Schiavelli is part of a party crowd and Joe Spinell is a cop. If you look quick you’ll catch Bill Murray in a bar, wearing a moustache. He gets one quick line.

Besides its evocation of a much-mythologized time and place, the best thing about Mazurzky’s picture is that it doesn’t push the sentimental or maudlin buttons too hard. We believe that Mazursky’s alter-ego Larry was a sweetheart who bumbled his friendly way toward better things.

The Twilight Time Blu-ray of Next Stop, Greenwich Village is a much improved presentation over the old Fox DVD from 2006. The picture seems brighter overall, but not so much as to make Larry’s Greenwich environment seem idealized — these are still dilapidated unpainted firetraps that they’re living in. On this viewing I was reminded that the soundtrack by Bill Conti is sprinkled with expressive Dave Brubeck jazz tracks.

Paul Mazursky passed away in 2014. The disc retains his director commentary from the older release, which includes extra comments from actress Ellen Greene. The pleasant-sounding Mazursky happily recalls his collaborators. The first thing he does is admit that this is his favorite film because, naturally, “It’s all about me!” Julie Kirgo’s liner note essay captures the affection we feel for the film and its personalities — it’s a love note for the creatively ambitious folk among us.