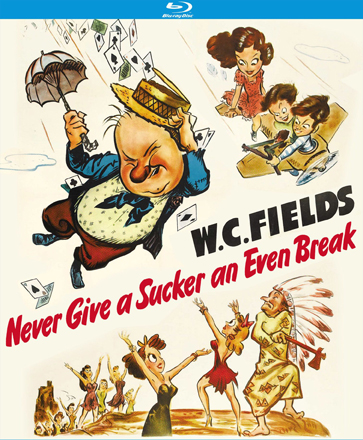 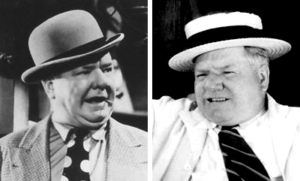 If Larsen E. Whipsnade ever laid eyes on Harold Bissonette, his mouth would water. Bissonette, a mild-mannered grocer for whom no good deed goes unpunished, is the perfect target for a con man like Whipsnade. W.C. Fields performed variations on both of those diametrically opposed characters throughout his career but in Never Give a Sucker an Even Break he synthesized them into one complicated but equally funny cat: himself. Released by Universal in 1941, the movie was Fields’ last starring role. It’s hilarious, unmanageable and a shambles – in other words a self-portrait of the comedian at the sunset of his career. He would not exit without a fight. 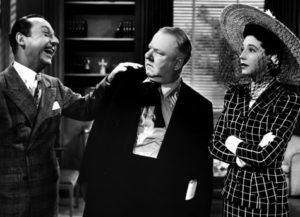 The working title was The Great Man (in some countries it was known as What a Man). The studio rejected that immodest title but it was the least of the battles Fields would encounter. The outline he submitted was, according to the Hayes Office, “filled with vulgar and suggestive scenes and dialogue,” so Universal summoned a small army of ghost writers to neuter Fields’ ribald fantasies. He and director Edward Cline reacted in the only reasonable way possible and proceeded to shoot just what they wanted. Though the completed film still shows the effects of studio interference it’s unclear if the movie would have made any more sense if Fields was left to his own devices – for better or worse, Never Give a Sucker an Even Break reveals the unfettered mind of its creator.

Meta before meta was even a thing, the film opens with W.C. Fields playing a character named W.C. Fields as he admires the billboard for his latest success, The Bank Dick, when a comely young lass catches his eye. A punch in the kisser compliments of her jealous husband brings Fields back to earth where he goes about his typical day, trading barbs with a sharp-tongued waitress and harassing a studio boss at Esoteric Pictures where he pitches the story for the movie we’re already watching. 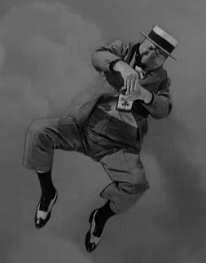 That story unfolds in a typically Fieldsian universe – one in which the rules that govern our world, like gravity for instance, have no meaning. It’s Fields’ version of Wonderland but his traveling companion on this cockeyed journey is no Alice; it’s his niece and she’s played by the squeaky clean Gloria Jean, a grotesque bit of casting that feels like the studio’s revenge on their misanthropic star.

Fields and young Gloria are vacation bound when the unpredictable comic decides to jump from the plane – not, as you might think, to escape Gloria but to retrieve a fallen whisky flask. He lands – after bouncing several times – in a mountaintop retreat where he meets the virginal cutie-pie Ouilotta Hemogloben and her imperious mother played by Groucho’s favorite foil, Margaret Dumont. Fields does his best to lead young Ouilotta down the garden path but the tryst is interrupted by her romantically inclined mom whereupon Fields beats a retreat down the mountainside in a makeshift elevator. 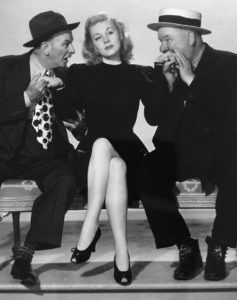 Fields lands in a Russian village and promptly realizes his hasty exit from the cloud-bound  hideaway was a mistake – Mrs. Hemoglobin is filthy rich. Back up the mountain he goes but when a love-sick gorilla enters the picture we’re whisked back to Esoteric Pictures where the studio head has heard enough. He throws in the towel and throws out Fields – which leads to a high speed free-for-all on the streets of Los Angeles that feels like every Keystone Kops car chase rolled into one. It all ends with a spectacular crash in front of a maternity hospital and the eternally chipper Gloria Jean twinkling, “That’s my Uncle Bill…but I still love him” – a denouement so lame you have to think it’s a parody of one of Universal’s more uninspired musical comedies.

As patchwork as it is and as it was intended to be, Sucker is rarely less than pleasurable thanks to Fields’ indomitable character. His reinforcements include Jody Gilbert as the spiky waitress, Leon Errol as Fields’ rival in romance, Susan Miller as the pliable Ouilotta and Franklin Pangborn, Fields’ favorite victim, as the flustered studio exec. 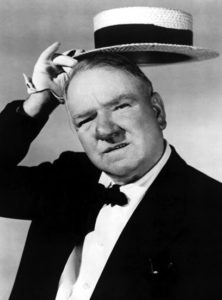 Fields was just 61 when he made Sucker but the comedian looks decades older. Unable, and too dissipated, to mount another starring film he fizzled out in bit parts in other, lesser movies including Follow the Boys, Song of the Open Road and his last film appearance, Sensations of 1945. He died in 1946 on Christmas Day, a holiday he despised along with many other things including music, toddlers, religion and people of color (his will included funds to be used for the establishment of a “W. C. Fields College for Orphan White Boys and Girls, where no religion of any sort is to be preached.”)

There are a few excellent biographies about The Great Man, in particular James Curtis’ W.C. Fields: A Biography and Simon Louvish’s Man on the Flying Trapeze: The Life and Times of W.C. Fields. Each offers clues into this complicated entertainer – but they offer only facts – not the tall tales, chicanery and surreal campfire stories that comprised the real inner life of this premiere fabulist. An American humorist who could stand shoulder to shoulder with Mark Twain and a writer whose characters are the  equal of Dickens’ most outlandish mountebanks, it’s his movies that offer the best portrait of the real William Claude Dukenfield.

Kino Lorber’s Blu ray contains a lovely, unblemished  transfer of the film which is more than can be said for Fields’ nose which threatens to erupt in living color before our eyes. Along with an audio Commentary by film historian Eddy Von Mueller they’ve  included an excellent appreciation from Wayne and Shuster first broadcast in December of 1964, Wayne and Shuster Take an Affectionate Look at W.C. Fields. The package wraps up with an assortment of original theatrical trailers including one for that other “great man”, The Great McGinty.