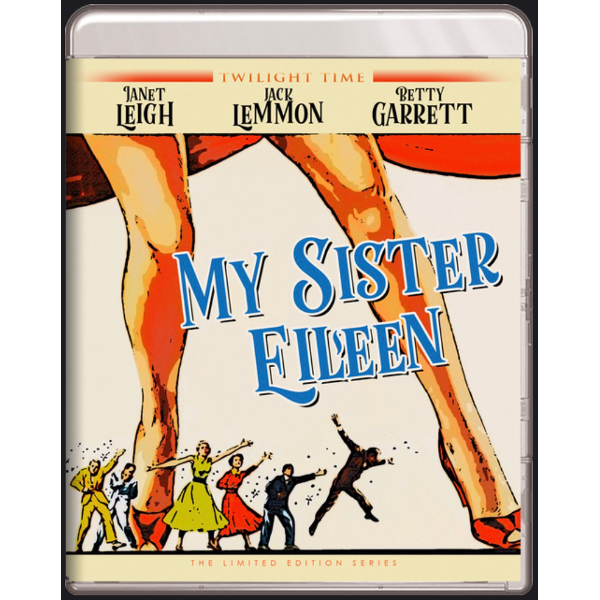 The making of a fun movie musical was rarely as easy as jumping up and shouting, ‘Let’s put on a show.’  My Sister Eileen arrived from such a twisted path of intentions that we’re surprised that it’s a good movie at all. In 1955 the Hollywood musical in the MGM mold was folding its tent, for a number of reasons. MGM’s musical units required huge resources, and the economics of downsizing had already pinkslipped the bulk of the specialized personnel from the studio payroll. The Broadway adaptation was taking over in a big way, as seen in Rodgers & Hammerstein’s Oklahoma, where the original producers retained ownership.

It all started with some stories by Ruth McKenney, about two Ohio sisters who come to Greenwich Village in search of fame and fortune. First up was a 1940 non-musical play, My Sister Eileen which starred Shirley Booth and Jo Ann Sayers. Columbia Pictures then adapted it into the comedy hit My Sister Eileen (1942), starring Rosalind Russell and Janet Blair. Completely separately, a 1953 Broadway musical adaptation of the play (not the movie) called Wonderful Town was a hit for Betty Comden and Adolph Green, with music by Leonard Bernstein. It starred Rosalind Russell again, this time opposite Edie Adams.

The story goes that Columbia couldn’t afford to do Wonderful Town with the pricey Broadway talent, and so embarked on a completely different musical with music by Jule Stein and Leo Robin. It was intended to star Judy Holliday opposite Jack Lemmon, repeating their pairing in 1953’s It Should Happen to You. When Holliday proved unavailable Columbia reached out to Rosalind Russell before settling for Betty Garrett, an ex-MGM contractee who shone in that studio’s musical hit On the Town (1949) but hadn’t worked since. Garrett has the lead role, but is given third billing.

Dropping the small town prologue seen in the 1942 movie, the musical My Sister Eileen begins with Ruth and Eileen Sherwood (Betty Garrett & Janet Leigh) arriving in Greenwich Village, where the landlord Appopolous (Kurt Kaznar) suckers them into a ruin of a basement apartment. Lacking curtains, they have little privacy from the sidewalk traffic, and the daily street cleaning machine douses them with water. Not only that, subway construction explosions shake the building at regular intervals. Upstairs live Helen and Wreck (Lucy Marlow & Dick York); Wreck is an off-season football player who picks up money as a wrestler. Vivacious blonde Eileen wants a theatrical career but mostly attracts men of all descriptions, including soda jerk Frank Lippincott (Bob Fosse) and sharpie reporter Chick Clark (Tommy Rall). Aspiring writer Ruth meanwhile connects with Bob Baker (Jack Lemmon), a short story publisher who only slowly realizes that she has talent. Convinced that she’s a plain Jane, Ruth feels inadequate next to her boy-bait sister. She tells Bob that the Eileen character in her stories that Bob likes so much, is actually based on her. Various mixups involve Frank thinking that Wreck lives with the Sherwood sisters, and Ruth being sent to do a story on some Brazilian sailors. They pursue her back to the apartment, and go crazy over Eileen. The police interpret a Conga dance as a street riot, and everybody is arrested. Light and breezy, My Sister Eileen benefits from its eager and capable cast. Betty Garrett is as good a Ruth Sherwood as anyone, nimbly affecting the insecurity of a woman who knows she’s smart but who feels outclassed by beauties like her sister. Janet Leigh is probably the most glamorous Eileen of all, yet she leads with her personality, not her body. Although none of the Styne/Robin songs are particularly memorable, they’re performed with style, and the dances by ‘Robert’ Fosse are a standout, especially a duet in an alley behind a burlesque theater. It’s a class- A pairing of Fosse with the great Tommy Rall (Kiss Me Kate, Seven Brides for Seven Brothers). A shining talent in just a few films, Rall’s name never quite became a household word.

Rall and Fosse’s work insures that musical fans will want to see My Sister Eileen, but neither performer is exactly magnetic in the acting department. Compensating mightily is Columbia’s up ‘n’ coming major star Jack Lemmon, who grew in popularity with each succeeding supporting role yet didn’t fully break out until Billy Wilder’s Some Like it Hot.  Lemmon adjusts his playing perfectly, keeping a little in reserve so that his Bob Baker will emerge naturally as the right guy for the deserving Ruth. I’ve read reviews that charge this musical remake with ’50s sexism. The idea is that Lemmon’s character wins the insecure Ruth by quietly proving his superior judgment and paternal stability. Back in the 1942 movie, Rosalind Russell’s Ruth had a stronger personality and will than the Bob Baker played by Brian Aherne. Perhaps the answer to that is, who wouldn’t have a more forceful personality than Brian Aherne? The casting determines the chemistry.

The movie isn’t all that expensive, and it shows. We get some second-unit work on New York streets, and a beautiful scene with a Brazilian yacht at anchor, but most everything else plays out on back-lot sets. The apartment set is rigged as a ‘shaker’: when those subway explosions hit the whole place jumps a couple of inches. When Eileen auditions at what turns out to be a burlesque theater, we stay behind in the alley with her competing boyfriends.

Like his fellow director Blake Edwards, Richard Quine began as an actor, and had played the Lippincott character on stage and in the previous Columbia movie. He had sufficient musical experience and had directed a nicely-turned pair of Columbia films noir (Drive a Crooked Road and Pushover). But working in CinemaScope appears to have defeated Quine’s visual sense. Likely pressured to keep things fast and simple, Quine follows the Early CinemaScope playbook — spread actors across the screen, shoot everything straight-on, and avoid close-ups. The picture often looks flat, and the long lenses make the supposedly cramped Sherwood apartment seem enormous.

But that framing is a boon for the film’s good dance numbers. Bob Fosse makes them dynamic and athletic, and doesn’t overload the style with his trademark hipster touches. This was the same time that Fosse was working on Broadway’s Damn Yankees. Some of Betty Garrett’s comic-seductive gestures when distracting the Brazilian sailors echo the faux-Egyptian koochie-coo moves of that play’s Lola.

The finale relies a bit too much on the ‘big party’ energy that comes with the rambunctious sailors, who don’t speak English and simply smile and dance like Latin robots. They served more or less the same function in the ’42 comedy as well. The show turns out to be frivolous in the best sense — we like the people and have a good time with it.

However, Richard Quine missed a bet by not ending as did the older movie, with a surprise guest appearance by the Three Stooges. As it is, the running-gag with the subway demolition explosions has no ‘topper’ payoff. Suggestions, anyone?

The Twilight Time Blu-ray of My Sister Eileen is a stunningly good encoding of a movie that was rediscovered in the 1990s when it came out on letterboxed laserdisc — previously it had been an unwatchable grainy pan-scan mess, chopped up with TV commercials. The earlier DVD was okay but a tad soft, which didn’t help readability for a film that’s 80% wide shots. Restored to its full lustre — its original stereophonic soundtrack has been reconfigured for 5.1 stereo — it’s quite a treat. With Garrett, Leigh, Lemmon, Fosse and Rall looking so young and eager, one wouldn’t know that this kind of musical was on the way out.

The presentation comes with an Isolated Music Track (with a little dialogue and effects here and there) and a special trailer. Several men tell us how much they go for Eileen, even other Columbia contract actors not in the movie. Julie Kirgo’s liner notes do a better job of explaining the tangle of ‘Eileen’ versions than I did above. I guess there must be multiple musical versions of other source stories but I can’t think of many.  A Christmas Carol?

Look up Betty Garrett and you’ll see that she’s yet another case of collateral damage from the blacklist. Her husband Larry Parks felt the full force of the HUAC’s wrath, and she was denied work simply on the basis of that association. For several years the two of them had to go back to various kinds of stage work.

Speaking of contract actors, Dick York was really just beginning his feature years after scattered TV appearances — Richard Quine would bring him back to support Jack Lemmon in the engaging Operation Mad Ball. The capable Lucy Marlow had some opportunities but didn’t catch a break. She suffered the wrath of most young women cast opposite Joan Crawford (in Queen Bee) and was suddenly showing up mostly in TV westerns. Ms. Marlow and the great Tommy Rall may be the only Eileen cast members still with us.