We’ve already got a fine domestic disc with both versions of John Ford’s fine Henry Fonda western. This Region B UK release duplicates that arrangement with different extras, and throws in a fine HD transfer of an earlier Allan Dwan version of the same story — with strong similarities — called Frontier Marshal. It stars Randolph Scott, Nancy Kelly, Cesar Romero and Binnie Barnes and it’s very good. 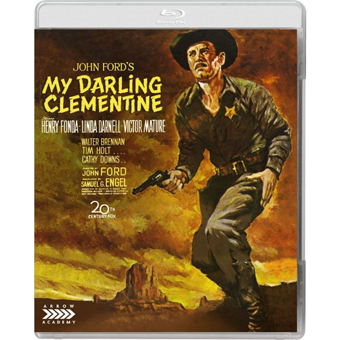 Yes, it’s another Region B review of an American film already available in a good Blu-ray presentation domestically. Why take notice? Because of the extras. This deluxe disc set includes a second Hollywood film about the gunfight at the O.K. Corral, as well as a different commentary and alternate featurettes and essays. 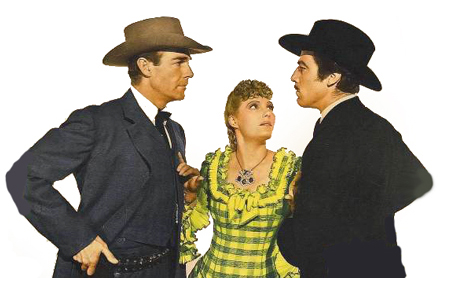 An earlier review for Criterion’s Blu-ray of My Darling Clementine discusses the differences between the release version and the slightly longer pre-release version, which is also edited slightly differently. Arrow’s UK disc contains the two versions and Robert Gitt’s comparison featurette as well. It’s a unique instance that an early studio cut still exists, one closer to what John Ford assembled. Darryl Zanuck always had final cut, but this seems to be the only ‘director’s version’ saved in the vault. When the UCLA Film Archive began screening 20th Fox studio prints in the early 1970s, there were a number of surprises, such as the ‘Zanuck gag’ spliced on the end of the official studio copy of The Mark of Zorro. We immediately noticed that in our beautiful studio print, Wyatt Earp didn’t kiss Clementine Carter at the finish; I think even visiting lecturer Jim Kitses was surprised to see that. But we certainly didn’t catch the other differences in the editing. This was wa-ay before the advent of video instant replay.

I’d like to say here that Europeans loved American westerns as much as we do and probably more; German film companies were making westerns of their own at an early date. Some of the earliest genre criticism came from England, with critics like Lindsay Anderson, Philip French, Colin McArthur, Tom Milne and Christopher Frayling taking a first crack at the pantheon of western greats. First and foremost in their roll call was John Ford, and My Darling Clementine was considered a blueprint for a classic western. This is the movie that cemented Henry Fonda’s western image, as an incorruptible westerner answering the call of duty. The English critics were especially keen to note the extreme contrast between Fonda’s Wyatt Earp and his ‘Frank’ in Sergio Leone’s later Once Upon a Time in the West, a movie that couldn’t exist without the American models it worships. 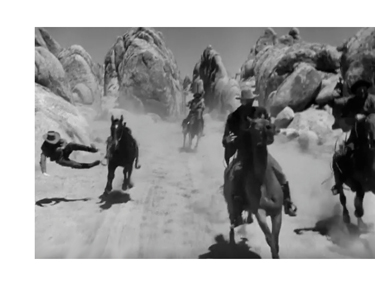 Since I’ve covered the My Darling Clementine issues fairly well already, I’m going to move along to the Arrow disc’s extra second feature from 1939. Frontier Marshal is a really entertaining western in its own right. Directed by Allan Dwan, it itself is a remake of a Fox movie made just five years before. Both of those and Clementine are based to different degrees on a single novel by Stuart N. Lake. A comparison between Clementine and Frontier Marshal is really illuminating. The Dwan movie is a pre- Stagecoach Fox entertainment, an ‘A’ picture with considerable studio production values and a better than average cast. Much of what happens in the Dwan movie parallels Ford’s version made seven years later. But the tone and approach is completely different.

Wild town Tombstone is a violent place. Crooked saloon owner Carter (John Carradine) also controls a gang that robs stagecoaches; his main thugs are Curley Bill (Joe Sawyer) and Pringle (Lon Chaney Jr.). Carter is losing all his business to the much more popular saloon across the street, where singer Jerry (Binnie Barnes) packs ’em in. Jerry is crazy in love with the sickly gambler / fallen surgeon Doc Halliday (sic; Cesar Romero). Halliday suffers from a wicked death wish and provokes gunfights for little reason. Hoping to disrupt his competition, Carter sends Indian Charlie (Charles Stevens) to shoot up the place, and then hijacks visiting entertainer Eddie Foy (Eddie Foy, Jr.) Assuming the job of Marshal to tame the town is Wyatt Earp, a gunfighter with a weighty reputation (Randolph Scott). Earp keeps Carter’s henchmen at bay, and befriends Doc. When Doc’s fianceé Sarah Allen arrives from the East, Halliday coldly sends her away. Wyatt convinces Sarah to stay, as Doc needs someone who really loves him to free him of his suicidal tendencies. 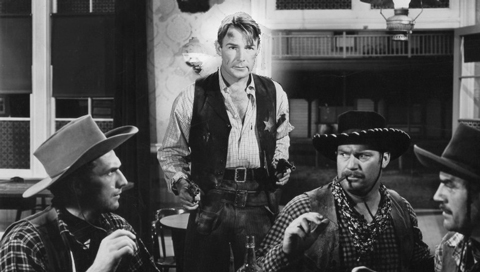 Frontier Marshal will be an eye opener for John Ford fans, as this largely forgotten feature shares so many plot elements with Ford’s classic. Wyatt gets hired as Marshall by dragging Indian Joe out of a saloon, and the same actor is used in both movies. Romance-wise, the Earp-Halliday-Allen triangle is identical to the Earp-Holiday-Carter triangle. Saucy bar girl Binnie Barnes (excellent) subs for Linda Darnell’s Chihuahua; both characters are thrown in a horse trough, and both betray the heroes, for mixed-up reasons of jealousy. When a little kid is wounded in a drive-by street shooting, Halliday performs an operation on a bar table, just as Holiday does for Chihuahua in Ford’s film. A stagecoach ride out of town is a shared event. Doc also accompanies Wyatt on an ad hoc mission to ‘rescue’ a thespian being harassed by the bad guys. 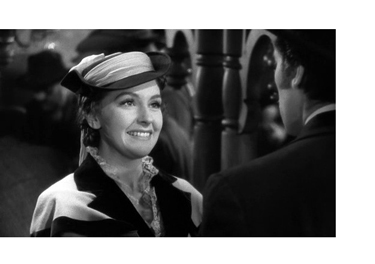 Other things are quite different. Frontier Marshal has no Earp brothers an no sense of a family feud. Its Lone Pine locations for action scenes are attractive but haven’t the remote, historical feel of Ford’s Monument Valley. Frontier Marshal is lighter in all departments, with Cesar Romero’s Doc a more shallow brooder. The bad guys are ‘Hollywood colorful,’ in contrast to Walter Brennan’s bitter and disturbing Ike Clanton. Dwan’s film has more than its share of fun characters. It gives perennial ‘jolly Mexican’ Chris-Pin Martin an excellent dramatic scene, worrying about his wounded adopted son. Lon Chaney Jr. has a nice bit to play, pre- Wolf Man. It’s good to see Nancy Kelly in a significant role, sixteen years before she made to overplay her starring role in The Bad Seed.

In short, Ford adds the grandeur, the historical dimension, the feeling that a nostalgic shared past is being expressed. Those Brit critics all but fainted over the beauty of the square dance at the half-built church, a ritual that combines Sunday-go-to-meeting manners and innocent courtship. Frontier Marshal sets up a Wyatt-Allen romance without really following through; while in the Ford film we feel that Wyatt and Clementine’s love is an inevitable future event. Frontier Marshal is a highly enjoyable ‘A-minus’ Western feature. Allan Dwan’s direction is smooth and assured. It’s great to find a new quality studio western to enjoy. 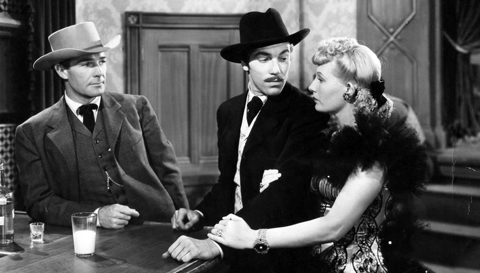 Arrow Academy’s My Darling Clementine plus Frontier Marshal is a two-disc Region B Blu-ray set. The theatrical Ford film is on disc one, with the bulk of the extras. The pre-release Clementine shares disc # two with an excellent, spotless transfer of Frontier Marshal. As with the Criterion release, the theatrical cut of Clementine has the edge over the pre-release cut, which very likely exists only as the one print we saw screened at UCLA.

The Arrow extras are not ‘better’ than Criterion’s, only different. Scott Eyeman and Wyatt Earp III’s commentary is a nice contrast with the authoritative Joseph McBride’s. Tag Gallagher’s visual essay is a repeat, along with Robert Gitt’s essential guide to the two Clementine versions. But Arrow has several new items as well (see below). This new disc is also generous with the insert booklet essays, courtesy of Kim Newman and Glenn Kenny, who takes on the topic of Frontier Marshal.

Arrow’s fancy packaging gives us two Blu-ray discs in a keep case with the 40-page color souvenir-essay booklet and a choice of jacket artwork. This all fits into an attractive card sleeve.

Since we’ve seen plenty of images from Ford’s film, I illustrated the review with a few from Allan Dwan’s picture.