Gill(ian) Armstrong’s breakthrough feature does a leapfrog over stories like Little Women, with heroines that prevail even when adhering to the Meek Sex role of their time. Judy Davis’s Sybylla Melvin knows that she’s a freckle-faced pain in the neck: despite being proud that she’s attracted the local male catch, her every sinew is committed to her goal of artistic expression and self-fulfillment. The setting is the turn-of-the-century Australian Outback but the story is universal. Sam Neill suffers through the best ‘thankless’ romantic role ever. 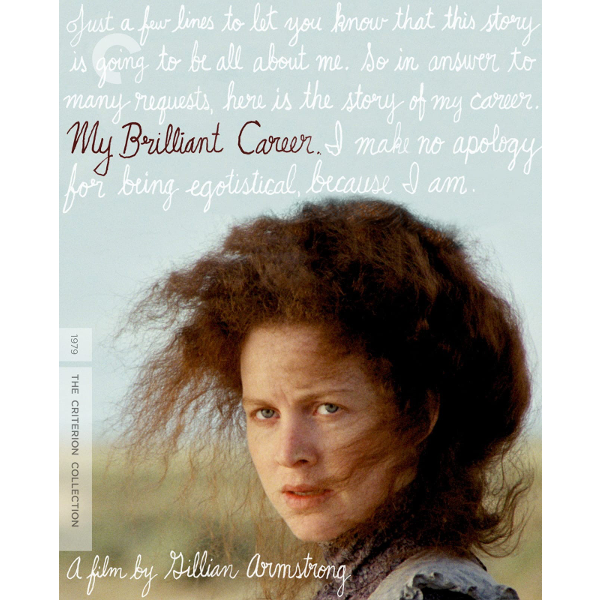 Australian movies range from high art to crude exploitation, but I prefer the medium ground of Gillian Armstrong’s My Brilliant Career. It may be feminist at its core, but Eleanor Whitcombe’s wonderful screenplay mocks the plucky heroine almost as much as it celebrates her spirit. In these days of PC femme-rising assertive goddesses, it’s good to enjoy the trials of a liberated woman as flawed as the unreconstructed folk around her.

My Brilliant Career is one of the strongest of the Australian ‘quality exports’ of the late 1970s. Our first overtly pro-feminist American films from a few years earlier tended toward worst-case scenarios like Diary of a Mad Housewife. Even the positive-message An Unmarried Woman conceives of the issue in terms of horrible males, with Jill Clayburgh tormented by an unfaithful crybaby husband and a terminally selfish lover. Armstrong’s delightful, witty film short-cuts the political finger-pointing to take up the story of a plain Jane of the Outback who has the temerity to resist the limited path set for her by society. The fact that she’s outspoken and even a bit vulgar is a major liability in the eyes of the upper class matriarchs that try to whip her into shape.

My Brilliant Career introduced new personalities to the movies. The focused, intense Judy Davis must work hard to appear at all ‘plain.’  Sam Neill and director Gillian Armstrong were equally unknown to American audiences. The film received a decent release, and ended up representing the top end of the Australian cinema boom in the late ’70s that included Peter Weir and the Mad Max movies.

Mrs. Melvyn: “To have such a daughter — useless, plain and godless. What can I do?”

Miles Franklin’s original story could be the amusing flip side of a women’s pocketbook romance. Impoverished daughter of the outback Sybylla Melvyn (Judy Davis) is twenty years old, freckled and frizzy-haired. Her family needs her out of the house simply because they can no longer afford to keep her. Sybylla has literary ambitions (or the theater! or the opera!) but out in the sticks, her only realistic career path is to become a servant. A reprieve comes when well-to-do relatives take her in; they like her spirit but not her unladylike tendency to sing bawdy songs and drink too much at parties. Aunt Helen (Wendy Hughes) helps her houseguest to feel more feminine, but is puzzled when Sybylla happily repels the advances of a rich but creepy cousin, Frank (Robert Grubb). Sybylla is attracted to handsome landowner Harry Beecham (Sam Neill) but is put off by his popularity among other available girls. Sorting through confusing feelings and objections isn’t easy for Sybylla. When Harry finally proposes, she asks him to wait … to allow her to figure out what she really wants from life.

It takes about twenty minutes before we are exactly certain in what direction My Brilliant Career is going. In a sustained long-shot the clueless snoot Frank hops a fence and struts across a field to present Sybylla with a fistful of posies as she sits reading under a tree. As soon as he departs she throws them away to go back to her book. It’s the key scene in the show. Sybylla has other things on her mind than proposals, and surely not from a geek like Frank. It’s enough to make romantically unrealistic guys give up before we start. The world’s really interesting women barely need us at all.

The function of the handsome Harry Beechams of this world is to reverse that attitude, and in most cases they do. Harry gets Sybylla’s blood moving faster, forcing her to suppress the call of the wild. She’s seen what becomes of women who marry for love — her own mother is struggling on a wind-scow of a farm. Beautiful Aunt Helen is only a few years older but is wasting away like an inert fossil because her husband deserted her without explanation. The family matriarchs sit in judgment over the younger women. They mean well, but none of them has the slightest regard for Sybylla’s avowed interests. She doesn’t aspire to be a wild single woman, exactly, but she’s desperate for an independent creative life. She loves men but would rather avoid the responsibility of being married to one right now, thankyouverymuch. Harry is a dream guy, an exciting man who wants to settle down. That doesn’t sound terrible to the confused young Sybylla — but being tied down is not on her list of ambitions.

My Brilliant Career comes from an autobiographical novel by a pioneering female author. Her Sybylla doesn’t hate men and doesn’t want to run wild in the city. She just pines for a better alternative to being an accessory in a man’s house. It’s enough to make Harry feel that he’s ruining Sybylla’s life just by proposing to her. Irish-Kiwi actor Sam Neill was as established as an actor could be in the nascent Australian film industry of the late 1970s. He was certainly the best looking actor available. His role as a suffering suitor has an echo twelve years later in Wim Wenders’ Until the End of the World, and he’ll always be known (unfortunately) as a scientific babysitter in Jurassic Park.

Traditional Australian Outback movies tend to be about men’s men and their wallabies or whatever. It’s not unusual for drinking to be more important than female companionship. The women are even tougher, as evinced by the two stirring versions of Nevil Shute’s A Town Like Alice. Sybylla isn’t suited to this background. We first see her calmly writing as the rest of her family runs frantic in the face of a massive dust storm. This makes her into something of an anti- Dorothy Gale, a woman not impressed by typhoons or tornadoes. Sybylla loudly protests that she’s too good to be a servant. But when she has used up her options (and presumably, the indulgence of her relatives) she must toil in a far lower capacity, teaching the almost feral children of another farmer to whom her family owes money. They’re filthy-ignorant pigs, beyond belief. It’s a working woman’s worst nightmare, and as funny as it is insightful. Sybylla has learned that maybe she’s aimed too high and gallantly proceeds to do more than play the guest in someone’s house. Her fortune will finally come, but not in the way she expects.

One reason My Brilliant Career works is that it’s something unheard of, an anti-romance story. Sybylla’s first encounter with Harry is almost a parody of bodice-ripping meet-cutes: she’s roosting in a tree like a twelve year-old, and he has to coax her down. Sybylla’s sharp personality captures Harry’s heart. He has no trouble finding willing debutantes but Sybylla is special enough to have him coming back no matter how rudely she behaves. At one point she smacks him with a riding crop, and means it. 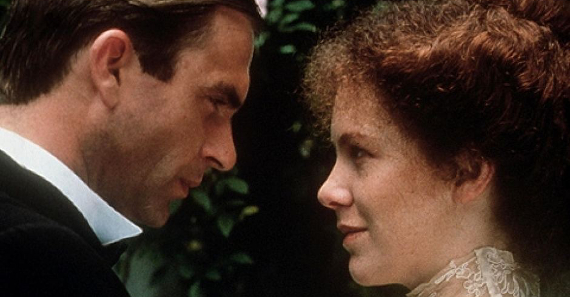 The pre-automobile vision of Australia is indeed an attractive setting. The meadow and hillside backgrounds for the lovers’ pursuits and pillow fights make My Brilliant Career more attractive than Hollywood movies with ten times the budget. Director Armstrong’s breakthrough picture led to international opportunities and she quickly became one of the top two or three female directors. My Brilliant Career also put Judy Davis on the map, although it’s reported that the actress hated her appearance in the film. Both women and their film garnered plenty of international prizes.

The Criterion Collection’s Blu-ray of My Brilliant Career is a new 4K digital restoration, approved by director Armstrong. The excellent color is a bit more subdued than that of an earlier Blue Underground Blu-ray.

Gillian Armstrong is in strong voice in a new video piece, speaking for an unbroken twenty minutes about her entry into film and her attitude about being identified as a woman director, as opposed to simply a good director. A second interview gives us the elegant Luciana Arrighi, to speak about her production designs. A special extra is one of Armstrong’s film school efforts, an eight-minute study of women working in a sweatshop shoe factory. Judy Davis appears from a 1980 French interview show — as a budding star she handles herself extremely well. 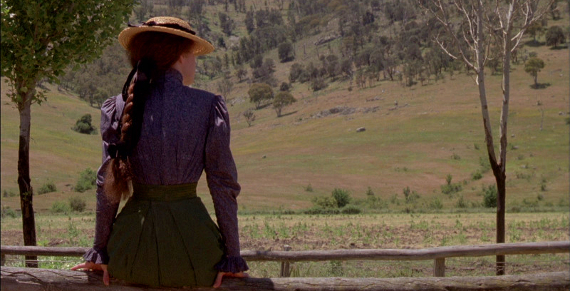 The director commentary appears to come from the earlier 2009 Blu-ray, which has mostly different and worthwhile extras as well; if you own it, don’t toss it — it has input from producer Margaret Fink, as well as news footage from Cannes. Ms. Armstrong says that she didn’t enjoy the film’s rapturous reception, as she mistakenly thought it was all a show set up by the publicity people. The older disc has a featurette on author Miles Franklin as well.

The fun and amorous My Brilliant Career is rated “G.”  I recommend it for its positive message. It could surely set many a teenaged girl to thinking about alternatives more personally rewarding than immediately disappearing into marriage. The main requirement for achieving in life seems to be judgment and courage.