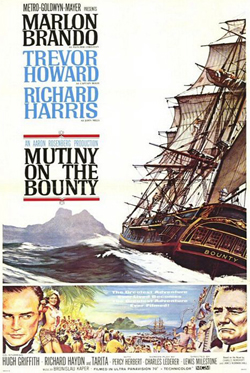 Mutiny on the Bounty

Filmed previously in 1915, 1933 and 1935, this souped-up version of the Nordhoff & Hall maritime classic was the first movie shot and released in Ultra Panavision 70 (aspect ratio 2.76:1). The problem-plagued production was constantly being rewritten, and went through two directors plus an uncredited reshoot by another. Star Marlon Brando’s erratic behavior on the Tahiti locations caused the already troubled production to go overschedule and overbudget, and the resultant film was roundly derided in its day. But it’s still one of the last truly epic big studio spectacles and its polished craftmanship still entertains.