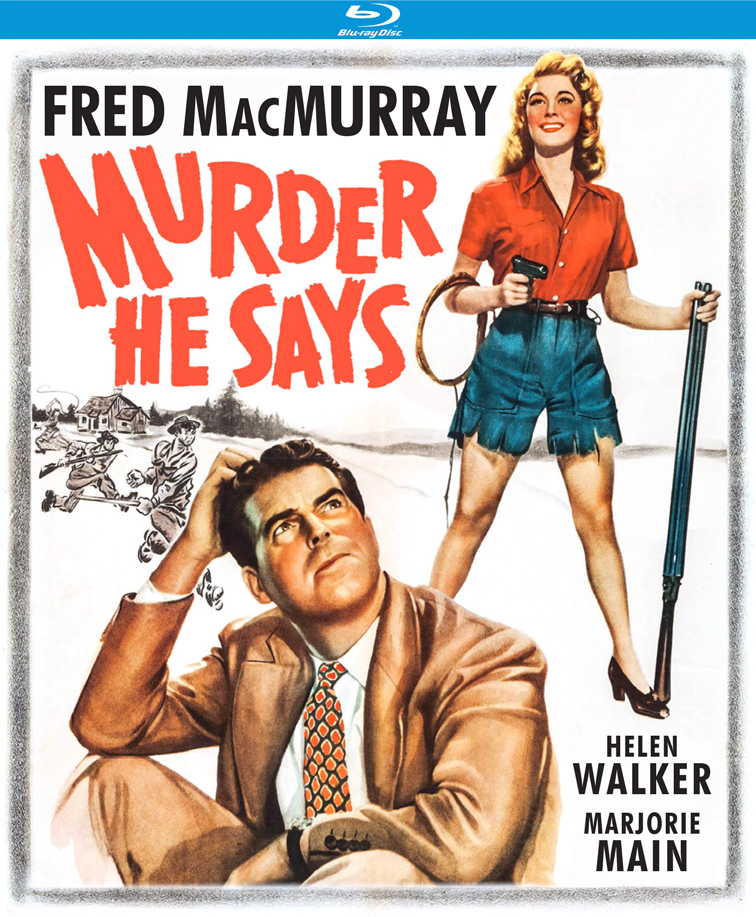 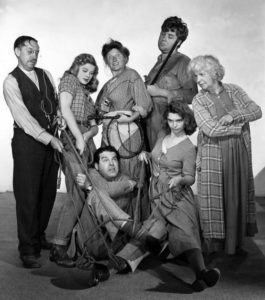 The Snopes family were a collection of Southern-fried scoundrels introduced by William Faulkner in 1940’s The Hamlet—over the course of three novels and several short stories, the clan proved themselves capable of just about any atrocity. They were so comically loathsome they could have been kissing cousins to Mamie, Mert and Bert: the Fleagle family – a slapstick version of the Snopes. Even the local sheriff is terrified of the Fleagles and a greenhorn census taker from the big city is about to find out why.

Fred MacMurray plays Pete Marshall, the eager beaver field man for the Trotter Poll (“like the Gallup Poll, but not as fast”) who’s searching for a missing colleague last seen headed toward the Fleagle house, way, way out in the woods (where presumably no one can hear you scream). Pete sets off on bicycle and promptly lands in a bear pit – a trap set by the Fleagles to snare unwanted visitors. He’s allowed to live only because he might prove useful – Grandma Fleagle is on her deathbed and only she knows where the loot from a years-old bank robbery is hidden. Pete can save his skin if he convinces the old lady to spill the beans. 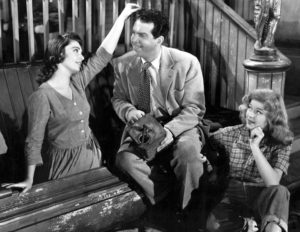 All of that and more happens in the first few minutes of George Marshall’s screwball horrorshow Murder, He Says – a conflation of Looney Tunes nonsense and Southern Gothic that has never been equaled. For most of the movie’s 94 minutes Marshall traps Pete and the audience inside the Fleagle’s haunted mansion – a dilapidated funhouse full of twists, turns, hidden staircases and trap doors. Much of the suspense derives from exactly who’s hiding within those dark corridors because Mamie, Mert and Bert aren’t the only ones prowling this cobwebbed hellhole. 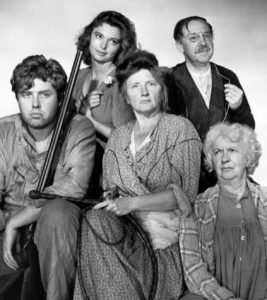 Among the lurkers are Porter Hall as Mamie’s latest husband – a milquetoast more lethal than he looks, Helen Walker as a beautiful interloper with her own designs on the cash, and Jean Heather as the otherworldly Elany Fleagle, a deeply weird problem child with insight into the nonsense rhyme that can unlock the mystery – if only anyone but she could explain it: “Honors flysis, Income beezis – Onches nobis, Inob keesis” (pro tip, don’t over-think it).

Marshall’s 1945 film is a singular example of America’s longstanding infatuation with redneck horror – from The Story of Temple Drake (based on Faulkner’s 1931 novel Sanctuary) to Two Thousand Maniacs to Deliverance to Easy Rider. The notion that the civil war is still being fought, this time by mutant hillbillies, has spurred a million yankee nightmares. No matter how pervasive the laughter, Murder He Says is the stuff that bad dreams are made of (its working title had the blunt sensationalism of an 80’s slasher movie: Murder Farm). MacMurray bobs and weaves to hilarious effect and his jubilant performance is in startling contrast to Marjorie Main as the terrifying Mamie Fleagle – a demonic Ma Kettle with a shotgun in one hand and a bullwhip in the other, she’s as unpredictable as a snake, coiled to strike at any moment, just like her whip. 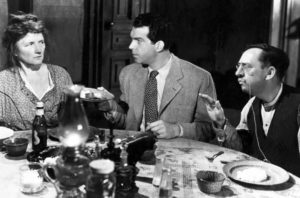 At the time of its release Bosley Crowther said the film “mixes mayhem and clowning with the happy abandon of a drunk suffering from dementia praecox” but in fact Marshall does an expert job orchestrating what could have been a free-for-all. Lou Breslow’s inventive screenplay is indeed an exercise in whiplash mood swings but those seesaw rhythms are exhilarating. Breslow was responsible for “special sequences” for W.C. Fields’ It’s A Gift and he dreams up some doozies for Murder, He Says including a wild Lazy Susan dinner sequence with rotating servings of poisoned food on the menu. The mashed potatoes glow – as does poor Grandma Fleagle and anyone else who comes in contact with the stuff.

Those images, absurd but nightmarish, like the more sinister passages from Alice in Wonderland, are unsettling to say the least, and Marshall has the artists of Paramount to thank. Gordon Jennings and Paul Lerpae‘s special effects – including the ghost-like dog that prowls the forest and the split-screens that allow Peter Whitney to play both Mert and Bert – are near immaculate. The movie’s blend of horror and humor might have curdled altogether were it not for the work of Bremen-born Hans Dreier. He was Paramount’s supervising art director and his designs for the Fleagle house showed a flair for macabre grandeur – a handy talent when it came time to build Norma Desmond’s mansion in 1950; Sunset Boulevard capped Dreier’s long career with an Oscar. 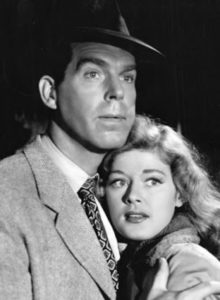 Kino’s new Blu ray release looks fine, occasionally soft and clearly not a major restoration but Theodor Sparkuhl‘s cinematography looks quite pleasing (he knew his way around shadows – he did the honors for the 1942 noir The Glass Key). The disc comes with an assortment of trailers and an entertaining and informed commentary from Michael Schlesinger and film archivist Stan Taffel.

I asked Michael to clear up a mystery for long-standing fans of MacMurray and Murder, He Says. At one point the actor lets out with a Homer Simpson-like “Do-h!” – to the amusement of contemporary viewers everywhere. Was this the first time a comedian used that yelp to express surprise and frustration? 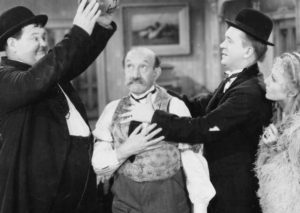 According to Michael: “The origin of ‘D-oh!’ goes back to the beginning of talkies. It was originally ‘Do-o-o-ohh!’ and spoken by the great Jimmy Finlayson in his many appearances opposite Laurel & Hardy and other Roach comedians. Dan Castellaneta specifically said that he got it from ‘Fin’, and the first time he used it, Groening liked it, but had him shorten it to the ‘annoyed grunt’ indicated in the script – fun fact, it’s still written that way to this day.”