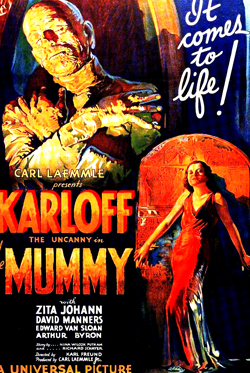 Directed in 1932 by the brilliant Karl Freund (a year after he photographed Dracula), The Mummy remains one of the greatest horror films ever made. An appropriately cadaverous Boris Karloff plays the lovelorn title character (sporting not one but two uniquely disturbing make-ups by Jack Pierce), giving a superbly understated performance that is both malevolent and intensely romantic. Here’s more on The Mummy at Ferdy on Films.