This one delivers the 4K ‘experience’ — and David Lynch’s mesmerizing visuals and Angelo Badalamenti’s seductive music once again pull us into a different dimension. Four or five viewings down the line, the ‘storyline’ of this TV show-become-feature film is if anything less understandable. But it’s no less pleasantly weird — we can’t keep our eyes off of Naomi Watts and Laura Harring. My ‘quality’ section debates a question I’m getting more often: are 4K discs worth the upgrade? Several years ago David Lynch’s TV return to Twin Peaks proved without question that he was still relevant, that his highly personal style of filmmaking was still valid. The show contained episodes more experimental than anything ever seen on TV, teasing the audience’s willingness to stay on Lynch’s conceptual wavelength.

The advent of the new Ultra HD format gives Criterion a good reason to reissue Lynch’s Mulholland Dr., a picture that was remastered in 4K six years ago. The rest of the presentation and extras seem identical to the excellent 2015 Blu-ray release.

Conceived as a TV show, Mulholland Dr. had a rough start. The pilot was revised and rejected several times until Lynch expanded it into a feature film. It solidified the director’s departure from the orbit of anything predictable, even though it subscribes to his familiar personal world of directorial obsessions and themes. The non-Lynchian mainstream audience might found little to hold their attention, what with all the impenetrable games-playing. But the unfolding of this dream vision can be a cinematic pleasure. To its credit, Mulholland Dr. is not an in-your-face shock-fest like his extreme yet tepid Wild at Heart. Some of it almost plays like a Nancy Drew mystery . . . if Nancy had a strange doppelgänger girlfriend even sexier than she.

Lynch pulls us into his story as does any narrative filmmaker, with characters that connect with our emotions. Canadian acting hopeful Betty Elms (Naomi Watts) arrives in Hollywood and moves into her Aunt’s apartment while she’s away. But an amnesia-stricken woman known only as Rita (Laura Herring) has already sneaked in. Instead of calling the police Betty tries to help Rita recover her memory and discover her identity. In the first of several stories told in parallel, film director Adam (Justin Theroux) is being forced to use an actress he doesn’t want, by shadowy forces that freeze his bank accounts and make him a veritable fugitive in just a few hours. Rita and Betty grow closer as they collect clues that eventually lead them to the bungalow apartment of someone named Diane Selwyn. Corpses, a weird homeless man, lesbian sex, a phantom nighttime stage show, a mysterious ‘whatzit’ box, and ‘incredible shrinking’ relatives are only surface symptoms in a puzzle that recasts the women in strangely shifting identities.

I saw Mulholland Dr. with an ideal audience that absorbed it as we once did old-school art films, patiently accepting the mysterious weirdnesses. Rightly or wrongly, we studied every scene for clues to decode what is essentially a dream narrative, a psychological puzzle. Original reviews weren’t so tolerant, with some critics objecting to the film’s refusal to make linear sense from one minute to the next. A fairly straightforward mystery is left unresolved, and is instead fleshed out with tangential subplots that deconstruct its characters and relationships.

If the puzzle aspect of Mulholland Dr. is a good one, it’s because the original TV concept was clearly developing hints that would have been addressed as the miniseries went on. The characters dress up like one another. As in the old Ingmar Bergman head-scratcher Persona, at one point Rita and Betty seem interchangeable, an idea interestingly timed with their sexual collision. The theme is nicely echoed in the semi-interchangeable actresses Adam is trying to cast for his lip-synching pop-song scene.

The film soon turns in upon itself, reorganizing its relationships and creating a slippery sensation of narrative plasticity. Betty ‘becomes’ Diane Selwyn, and Rita ‘becomes’ Camilla Rhodes. The shifting identities and relationships could be alternate realities, alternate possibilities, dreams of potential realities — who knows?  Reality shifts just as if God said, “What if the mystery woman were already a big star and the neophyte actress a lesbian hanger-on who’s being dumped?  Make it so.” Lynch does a great job of handling the way one plane of reality appears to intersect with another. Camilla is the object of a hit ordered by Diane Selwyn (I think). She then transforms into Rita, who can’t remember her identity. Some events definitely happen in a specific timeline. Others, like the dead-of-night performance of the Roy Orbison song in Spanish, are isolated experiences that seemingly occur in a limbo outside the story we are watching. At times we can see Lynch reaching into his old bag of surreal tricks, but his odd visions find traction in our subconscious. In some dark corner of my mind, I can see myself dreaming about wandering into a damp alley, searching for a magic door to open.

The trick is to resist the urge to demand concrete interpretations. This isn’t a video game with a clue map that, once found, will explain everything. David Lynch isn’t trying to weed out non-hipsters not privvy to his Big Secret, but of course some frustration is possible. Lynch can be annoying, when we suspect he’s asking us to find things significant only because they are thematically linked to earlier work. The tiny squeaking Aunt and Uncle seriously gripe my patience. The ‘everything is an illusion’ mantra at the Club Silencio also seems trite, yet the scene generates an hypnotic mood, as if the girls were witnessing some kind of occult miracle. Where the two women are concerned I eagerly follow because, shame on me, I’ve been given an emotional anchor. The other truncated dead-end subplots can be a nuisance. Yet one greatly admires the fact that a Real Film Artist is getting his personal demons up on the screen. 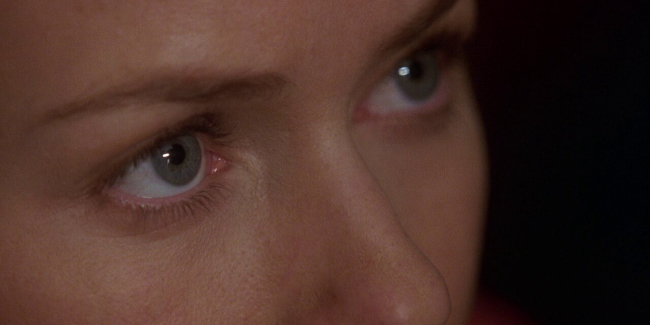 Mulholland Dr. makes few stabs at weird jokes, which is a good thing. Some perplexing plot turns increase our curiosity. What works best are the interesting, sensual characters. The performances are mostly fine, although Ann Miller’s catty landlady just seems detached and false, without falling into a mode that could be called engagingly weird. Strangely, Naomi Watts’ Betty is even more convincing when acting in a scene-within-a-scene, than she is playing herself, the naive newcomer in Tinsel Town. Lee Grant, Chad Everett, James Karen, Robert Forster and Dan Hedaya are just a few of the bits and just-bigger-than-bits that fill out the scattered plot sidebars.

That a movie this un-commercial could get a major release in 2001 is impressive in itself. Lynch became less enjoyably obscure in a couple of features that followed, but eventually bounced back with the popular Showtime revisit of Twin Peaks. This one remains my personal favorite.

The Criterion Collection’s 4K Ultra HD + Blu-ray of Mulholland Dr. is described as a new 4K digital restoration, which ought to mean that it’s newer than the 2015 Blu-ray, which was also said to be from a 4K scan. As before, it was supervised by director David Lynch and the director of photography Peter Deming. Content-wise there’s no difference but I do see a difference in the 4K on my 65″ monitor. We expect the higher contrast to pay off in night scenes, but I noticed it most in daytime scenes with Harring and Watts filmed in rooms that look un-lit, with everything in shadows. The wider contrast makes these all-in-shade interiors look correct — the old DVD transfer either left things dark or washed the picture out a little.

The daytime cinematography again captures the specific light of Los Angeles, sometimes with a slight haze effect. It’s hard to figure what if any of the footage was originally filmed for television, as everything has the theatrical Lynch ‘look.’

The extras appear to be identical. David Lynch is generous with his input. He opens up more about his work yet takes care to control the conversation. Sitting in with Naomi Watts, he behaves just like any other enthusiastic filmmaker, excited to remember how she joined the show. Watts expresses her relief that she doesn’t over-act in the scenes where she’s supposed to be a wildly star-struck newcomer. Both she and Laura Herring placed a great deal of trust in Lynch, even when the requirements of the TV show were expanded to R-rated scenes with nudity. The other participants also relish the opportunity to discuss their adventure in the film, and the challenges set by Lynch.

We see some deleted scenes and a large quantity of footage taped on the set. Lynch discusses his modus operandi for instinctive filmmaking in a long and thorough text interview, offered in a handsome 48-page insert booklet. Back in 2015 I noted the fact that Lynch was finally talking more about his work. I wrote that if he kept up this pattern, his branded line might lose some of its mystery. It hasn’t. 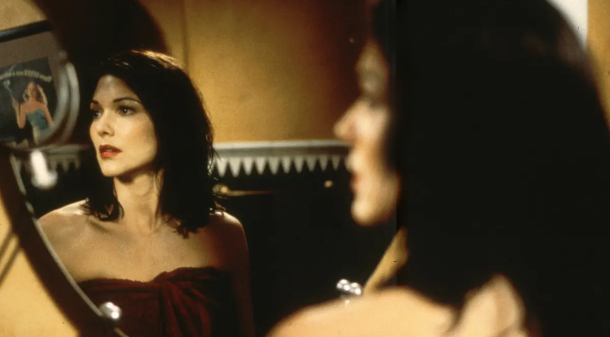 On 4K in general, for us mid-range consumers:

On the Citizen Kane 4K and on several earlier reviews we’ve been getting notes and comments asking if these new UHD upgrades are worth buying if one already has the previous Blu-ray. There’s no easy answer to that one. 4K UHD is at the moment the Rolls-Royce of formats. The players aren’t outrageously expensive but the display equipment really wants to be oversized. I’ve found that I only appreciate it on an extra-large monitor or a high-quality video projector. On just a couple of occasions I’ve seen 4K displayed in a lavish home theater environments, on a $10,000 super-monitor that maximizes every advantage of the format. Everything looked better than average digital theatrical projection.

Back in the reality of my living room’s 65″ monitor, most of the 4K discs I spin yield an improved picture, but the difference can be pretty negligible.

That’s for the average older movie, which is what I look at the most. Of those only the 4K remaster of Vertigo has jumped out with a huge difference. (I haven’t invested in Lawrence of Arabia or 2001 just yet.) The only new-ish film I wanted to own in the format is The Shape of Water. It also knocked me for a loop — instead of 5 shades of green-blue there now seem to be twenty, and the image detail is definitely doubled. Both of those films feel like real movie experiences, something really special.

But only my fellow film fan friends join me in my enthusiasm. We watch movies to critique the presentation as well as the storyline, whereas for my immediate family content is the one concern — a good story on a fuzzy DVD is fine, and nobody looks to see if the aspect ratio seems right.

Everything is subjective. I don’t try to explain why I’m excited to see my old ’50s favorites remastered at HD quality — many people I meet can’t understand why I’m still watching DVDs. Am I an ‘expert?’  I have a experience working in real film and older videotape, but I have friends with no industry experience that are just as observant. In hard technical matters I now defer to friends that still work in film and video — and that also have better eyes and ears than I do.

That said, I can still tell when a disc looks great. This 4K of Mullholland Dr. is among the titles where I can perceive a real difference — it replicates completely the movie experience.