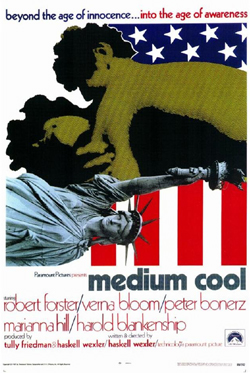 Combining electrifying cinema-verite documentary footage shot during actual events (including the riots at the 1968 Democratic National Convention in Chicago) with a more conventional story featuring actors, director-cameraman Haskell Wexler tried to illuminate the splintering of the American psyche at the height of the war in Vietnam. The resultant film, incongruously distributed by Gulf + Western’s Paramount Pictures, both exasperates and astonishes. Some felt it trivialized serious issues, others applauded its hand-held snapshot of a tumultuous time. Originally rated what Wexler labled a “political X” by the MPAA, later downgraded to an R.