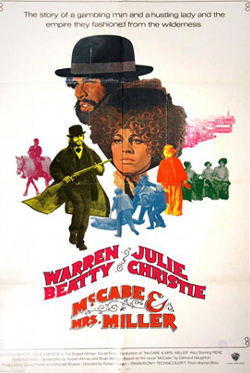 Filmed under the unlikely title The Presbyterian Church Wager, this opium-fueled anti-western was shot in sequence on frigid Vancouver locations. Director Altman and star Warren Beatty (in a role the studio wanted George C. Scott to play) collaborated on script revisions throughout. The mesmerizing result, strikingly shot by Vilmos Zsigmond, plays somewhat like a Leonard Cohen music video.