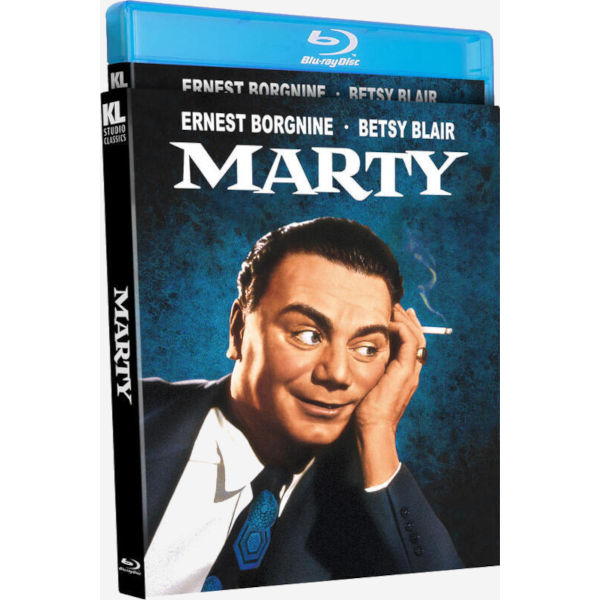 We’ve read several different stories explaining how Ernest Borgnine won the starring role in 1955’s Marty, the ultimate sleeper that ended up taking home Oscars for writing, directing, best picture — and best actor. Did Robert Aldrich sell producers Harold Hecht and Burt Lancaster on Borgnine?  Did he even have to?  Lancaster would have known the actor very well from From Here to Eternity and his own Vera Cruz.

I don’t think Borgnine needed a push from anybody. I saw him personally once at a 1974 Director’s Guild screening, greeting people and shaking hands with a huge grin on his face. From 60 feet away I instantaneously liked the guy — his big schmooze was 100% honest and open. We got the same impression seeing one of his Borgnine’s first movies, that was revived and rediscovered just last year, Robert Siodmak’s The Whistle at Eaton Falls.

Despite having been adapted from a TV play, Marty struck 1955 audiences as something equally fresh and honest, communicating a ‘Common Touch.’ It didn’t matter that the film was made by industry insiders; Chayefsky’s drama and Borgnine’s sincerity was a break from Hollywood glamour. Although not a monster hit, it did very well and was reviewed even better. So impressed was the New York Times’ Bosley Crowther, he capsulized its entire plotline in his review. Marty generated such goodwill that it was nominated for eight Oscars in toto. It took most of the major American critics’ prizes as well as several overseas, including the Cannes’ Palm d’Or. 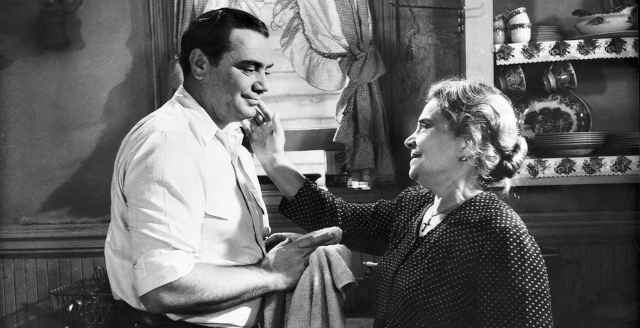 Marty made news for other reasons as well. The first live TV production to be adapted to the big screen, it demonstrated that Hollywood and network TV didn’t have to be enemies. A major studio would never have made such a deal, but Harold Hecht and Burt Lancaster’s independent outfit had a good thing going with United Artists. Their pictures Apache and Vera Cruz had been solid hits; they believed in the film so strongly that they spent as much to promote it as they did to produce it. Burt Lancaster hosted the film’s trailer, to compensate for the lack of star names in the film itself.

Rod Steiger and Nancy Marchand had starred in the noted TV drama. They were almost the only talent replaced for the film version. Playwright Paddy Chayefsky adapted his own TV script and TV director Delbert Mann stepped up to feature directing. Esther Minciotti, Augusta Ciolli and Joe Mantell made the jump as well.

Despite gaining major attention as the villainous Sgt. Fatso in From Here to Eternity, Ernest Borgnine had returned to playing stock baddies like Black Bart in Johnny Guitar. It was a rare thing for a character actor, a ‘type’, to cross the line to leading player, but Borgnine was the lucky exception to the rule. Hecht-Lancaster needed a different type to play Marty Piletti, who when happy describes himself as heavy-set and stocky, and when unhappy calls himself ‘a short, ugly man.’ Audiences liked the idea that a character specialist in thugs, hoodlums and western bad guys could get such a good break — for Ernest Borgnine to play a lonely, sensitive guy was like seeing a frightening neighbor revealed as sweet and lovable. An unusual star was born. 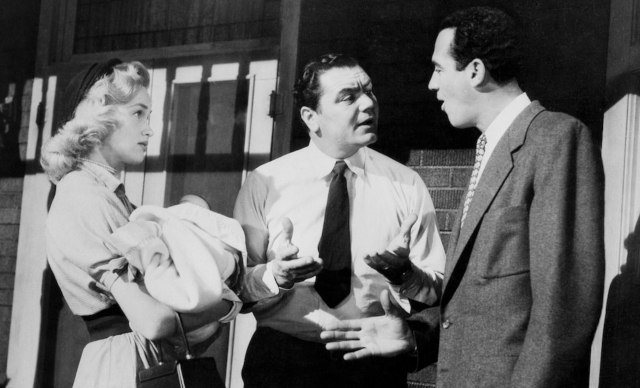 Co-star Betsy Blair’s engagement to play Clara Snyder was another story altogether. A liberal activist, Blair had tried to join the Communist Party but was turned down. She was married to Gene Kelly, a prominent liberal whose stardom and value to MGM shielded him from blacklisting attacks. Kelly reportedly used his clout at MGM to secure for Blair a small role in John Sturges’ Mystery Street and later, a slightly larger one in the same director’s Kind Lady. Her blacklisting in Red Channels made her all but unemployable, and again Kelly’s intervention got her the role in Marty. Although she won occasional Hollywood work, Ms. Blair moved her career overseas, where she acted for Juan Antonio Bardem, Michelangelo Antonioni and Basil Dearden.

Paddy Chayefsky’s original inspiration for Marty was a sign he saw in a New York ballroom: “Girls, Dance With the Man Who Asks You. Remember, Men Have Feelings, Too.” The movie version of his TV play opens the film up onto the streets of New York City. Bronx butcher Marty Piletti (Borgnine) is 34 and loveless, and sick of friendly advice to ‘find a nice girl.’ His nights and weekends are spent hanging out with his friends. A trip to a dance hall only brings more pain – a girl refuses to dance with him with just a quick, dismissive once-over. Marty then sees a plain girl ditched by her blind date, who steps out on a balcony to cry. She’s Clara Snyder, a Brooklyn schoolteacher who also considers herself a hopeless wallflower. Awkwardly at first — he even refers to himself and Clara as ‘dogs’ — they find that they are kindred souls. Do they have a chance? With his low self-esteem, Marty could easily give up on the whole idea. 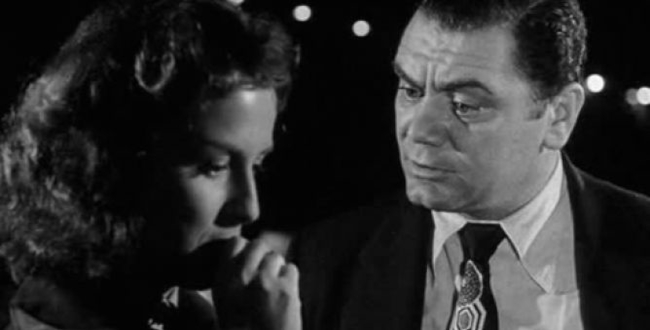 Marty and Clara’s problems grab our hearts from the first. Marty Piletti is ‘someone we know,’ someone we like and trust. He seems authentic, washing his hands as soon as he enters the house, as a butcher might. Marty hasn’t an unkind thought for anyone. He’s gentle with his mother (Esther Minciotti) and laughs when she suggests he go out to a ballroom where he can meet ‘tomatoes.’  The dance hall is mainly a pit of misery and failure. He’s shocked when a caddish guy offers him five dollars to ‘take over’ the dog date he’s been stuck with.

Marty feels unwelcome influences from all directions. His married younger brother Tommy (future TV director Jerry Paris) ignores his requests for business help. Angry to be saddled with a wife (Karen Steele) and a baby, Tommy avises Marty to stay single, and ‘avoid all the hassle.’ Alarmed by her sister Catherine (Augusta Ciolli), Marty’s mother becomes frightened that she’ll lose her house and be all alone if Marty marries. Marty isn’t sure that Clara is the solution for his problems.

Chayefsky has a deft hand with plain-wrap romance, and Marty always received compliments for its easygoing storytelling style and expressive characters. The most refreshing aspect was Paddy Chayefsky’s terrific dialogue, that seems ‘real’ yet is highly stylized. Today we have Quentin Tarantino, but Chayefsky was the former master of intense urban dialogue. Marty’s most innovative aspect is its vivid snapshot of a particular lowbrow spectacle in the big city. 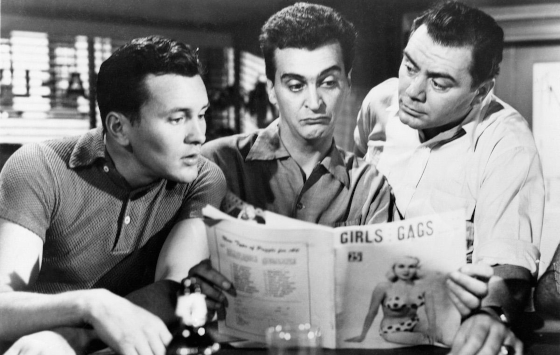 The play is famous for the dialog lines in which these aimless, unfulfilled drones ask “Whatta you wanna do tonight?” only to hear back, “I dunno, whatta you wanna do tonight?” Almost as quotable is, “Boy that Mickey Spillane can really write,” which expresses the grim lack of enlightenment in the room. Chayefsky and Delbert Mann’s film of The Bachelor Party (1957) visits the same situation with young men that are somewhat better off. It isn’t seen very often but it’s almost as good.

Andrew Sarris called director Delbert Mann ‘dreary,’ with the inference that the director was insufficently auteurist. Mann is inconsistent yet did very good work interpreting other plays. Middle of the Night is probably Kim Novak’s best acting performance, and Separate Tables is reasonable despite being warped out of shape by its star Burt Lancaster. If Delbert Mann in any way helped improve Blair and Borgnine’s performances, he wins a pass. Mann and Chayefsky also deserve credit for ‘opening up’ Marty by a full 1/3 without dissipating its energy.

The film’s most original character is still the miserable malcontent Angie. All of Marty’s buddies seem sexually misdirected, but Angie’s sad-sack attachment to Marty may be more serious. Actor Joe Mantell got few parts in films, but two of them have achieved immortal status. In addition to miserable old Angie, he did score another immortal movie role, he’s in Roman Polanski’s Chinatown. As the detective operative Walsh he gets to speak the best dialogue line of the 1970s: “Forget it Jake….”

Marty is a healthy humanistic challenge to the Hollywood notion that audiences could only identify romantically with glamorous stars. By that logic the real world belongs to 20,000 beautiful celebrities, and the rest of us are insignificant rejects. Chayefsky addresses the problem directly — we all need social acceptance to function and the pecking order of gregarious societies leave many feeling like diseased failures. When Marty and Clara meet, it’s a miracle reprieve from loneliness but also a victory for the romantic notion that there’s someone out there for everyone. 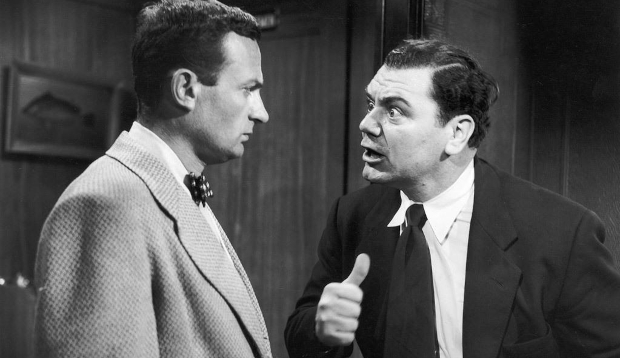 The KL Studio Classics Blu-ray of Marty corrects a disc release from 2014. It’s a new 4K scan presented in two aspect ratios: the flat scan we’ve seen on TV for 65 years, and a correct 1:85 that properly frames the show as it was screened in theaters. The widescreen scan really helps, unless you like to look at floor and ceilings; Joseph LaShelle’s B&W photography was framed to focus on faces, and when the frame is opened up, some of the dramatic concentration is dissipated.

The new transfer restores the film’s original United Artists logo, a nice touch. It’s the full-length version, 94 instead of 90 minutes. John Kirk in MGM’s restoration department corrected this back in the late 1990s. The uncut version includes a scene in which Betsy Blair’s Clara returns home and wakes up her parents to tell them about her evening with Marty. It was in 16mm prints prepared for TV, but not part of the full theatrical negative.

When I started writing ‘MGM Video Savant’ in 1997, one of the first consumer letters I fielded wanted to know why this scene had been deleted from the MGM Home Video’s VHS release. John Kirk and others were already aware of two versions of Marty and were looking for the longer one. It was eventually found, but I never heard an explanation why (or when) the movie’s printing negative had been cut.

Kino also adds a new audio commentary with Bryan Reesman and Max Evry. What with the live TV original, the enterprising Hecht-Lancaster company, the contradictory stories of the casting and the happy Ernest Borgnine story, there’s a lot to discuss. 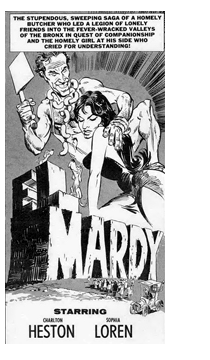 Burt Lancaster does indeed host the original trailer, a textless survivor from the UA vault. That explains why several neutral scenes are held on screen; they’re supposed to have the actors’ names, the title, and perhaps other text superimposed over them. Two stars’ names are present because those shots were taken right from the film’s concluding cast wind-up.

Because I was only three when the film came out, I only caught up with it years later. My first exposure was through a parody in an old Mad magazine, a satire about the Hollywood trend of turning any story into an epic road show attraction, no matter how inappropriate. The text at the top of this comic panel reads:

“El Mardy!  The stupendous, sweeping saga of a homely butcher who led a legion of lonely friends into the fever-wracked valleys of the Bronx in quest of companionship and the homely girl at his side who cried for understanding!”