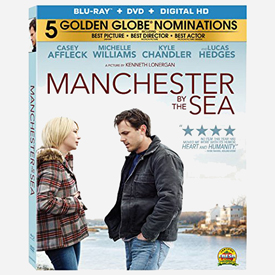 A major Oscar contender, Kenneth Longergan’s Manchester by the Sea is certainly sobering, yet is nowhere near as depressing as the initial word on the street would have had us believe. We all know of tragedies that happen all the time, things that we go to sleep at night praying won’t happen to us. Bad things happen to people and not all of it is their own fault — accidents, weather-related calamities, sudden catastrophic health issues. The rule of positive thinking tells us to continue onward like herd animals, convinced that there’s always some person slower than us, someone more likely to be pulled down by a predator. And we can’t let ourselves be sucked into the 21st century mindset that wants us to fear everything.

The trend in serious dramas these days is to consciously avoid the usual trappings of dramatic writing and performing. Events don’t occur in a dramatic arc, but just happen when they happen. People don’t burst forth with destiny-altering revelations, and communities don’t magically rally ’round people in need to provide an uplifting ending. In standard fiction tragic people often do something bold to atone for their ‘crime,’ making things better in some way. To give stories closure, really sad cases kill themselves, or exit the narrative with an event equivalent to ‘getting hit by a truck.’ Standard drama doesn’t like loose ends. 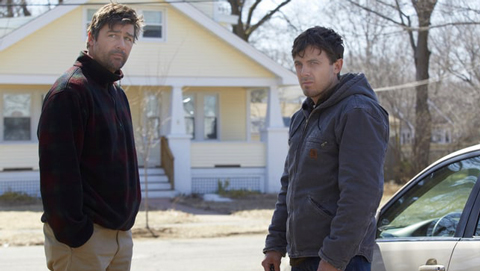 When reviewing a thirty year-old movie I don’t want to be restricted to non-spoiler discussion. Manchester by the Sea is so fresh that it’s far better to simply give a taste of the film’s tone, and to stay away from its big plot turns. Writer-director Kenneth Lonergan looks into the story of an unlucky New Englander. Lee Chandler (Casey Affleck) works as a janitor in for broken-down Boston apartments, keeping to himself in most things. He comes off as passive, but not defeated. When an unreasonable tenant becomes abusive Lee answers in kind, but refuses to become emotional. Lee does other things that indicate a serious emotional misalignment. He drinks by himself in a bar and flatly ignores an attractive woman who tries to talk to him. When drunk, his inner demons emerge and he picks fights with total strangers. One day Lee is summoned to his hometown of Manchester by the Sea, where his brother Joe (Kyle Chandler) has been suddenly hospitalized. Lee must assume responsibility for his nephew Patrick (Lucas Hedges), a duty that requires moving home, finding work and dealing with the horrible events of eight years back that caused him to move away. Lee begins a testy relationship with Patrick, who doesn’t drive yet but is sleeping with one girl and trying to do the same with another, under the same roof with Lee. Close friend George (C.J. Wilson) tries to help sort things out, but nobody will hire Lee even for menial work. Lee’s unstable reputation is re-ignited when he starts a fight in a local pub. The boat that Joe owned needs serious work, and the consensus is that it should be sold, and that Patrick should go live with relatives, something he doesn’t want to do.

But what is the real story with Lee? Manchester by the Sea makes skilful use of flashbacks to events that have gone before, slowly revealing the cause and depth of Lee’s anguish. We learn that Lee was an animated, cocky fellow who loved his two small children and his wife, Randi (Michelle Williams). We see him bringing his friends home to drink, play pool and make noise through the night, testing Randi’s patience. Not much later, Lee’s life is utterly destroyed. Many modern movies use flashbacks in an attempt to make dull stories interesting, mostly by withholding information. Older dramas and comedies use the withholding of information to keep a simple conflict afloat: characters don’t communicate obvious things to each other, to allow ‘misunderstandings’ to be cleared up like magic in the final act. Even Romeo and Juliet seems hung up on an unnecessary messenger fails. How many movies have we seen where the entire story premise would disappear if someone sent a ten-word telegram?

The flashbacks in Manchester by the Sea work because we’re deeply concerned for Lee. We all run into people with serious back-story issues, that we don’t know well enough to get personally involved. So we instead find out things as hearsay. A classic character like this is the choir director in the play Our Town. Everybody has a different story about what personal demon has led the man to drink. 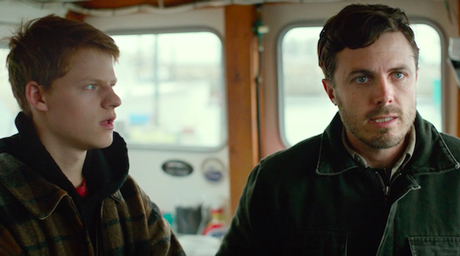 Manchester by the Sea doesn’t pretend that a person’s character can be read at all times. We can observe everyone, but must bring our personal experience to judge what we see. Director Lonergan doesn’t use old-fashioned giveaway clues to allow us to jump to conclusions. The camera maintains a standoffish distance, watching but not commenting. Only a few scenes use standard coverage, and many stay in wide shot. Many scenes refuse to ‘editorialize’ relationships with cutting cues: there are no sudden close-ups to tell us which dialogue bites are meaningful. The dialogue is stubbornly naturalistic.

As Lee Chandler, Casey Affleck has found the perfect character for his brand of performing. I found him frustrating in 2007’s The Assassination of Jesse James by the Coward Robert Ford because the same kind of impenetrable personality just made a long movie seem longer. This screenplay gives us plenty to think about at all times. Lee Chandler is compelling because we want him to break out of his funk, to be cured; we also wonder how we would hold up under the pressure he must face every day. Lee Chandler is trying his hardest not to exist. He needs a job that keeps him busy without a lot of human interaction, just so nobody will ask questions. His life has only one subject, and it’s all he can do to distract himself from thinking about it. I think Affleck could very well nab the Academy’s best actor slot next month. That’s what the word on the web seems to be, although I don’t like the reviewers that see the need to denigrate Ben Affleck while praising Casey.

The show observes people well, especially those in miserable circumstances. When Lee sees his ex-wife again the meeting is three kinds of awful. Getting back together is impossible. Lee has to strangle his need to scream, so he can front a behavior that won’t make him into more of a pariah. In investigating possible futures for Patrick, Lee takes the boy to have lunch Joe’s estranged wife Elise (Gretchen Mol) and her new fiancé Jeffrey (Matthew Broderick). The serious personal problems she had when she was with Joe and Patrick don’t seem to have gotten any better. The awkward, abortive lunch with Elise is just long enough to remind us of our own relationship Hell experiences. Elise is so fragile that she must leave the room after a few moments. 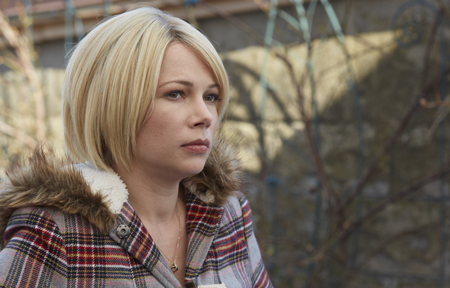 Lucas Hedges’ Patrick is nicely particularized, a convincing combination of obnoxious and decent qualities. He’s freaked out by the idea of his father being kept on ice, awaiting the spring thaw so that he can be buried in a local plot. The high schoolers in Patrick’s circle appear to have cowed their parents so thoroughly that boy and girlfriends can enjoy full privacy in bedrooms for hours on end. The mother of one of Patrick’s girlfriends won’t intrude even when it’s obvious that some level of sexual activity is going on. This is not judged by the film and especially not by Lee, who has lost the ability to deal with such things. Considering what he’s allowing under his own roof, he’s lucky he’s not being run in for corrupting minors.

The buzz I had heard about Manchester by the Sea called it terribly depressing, which just isn’t so. Depressing movies are ones that reject or mock human values. This show puts us in the shoes of a man who has becomes a social Untouchable, even to himself. Lee Chandler is the kind of guy that neighbors write off and hope will just go away, because they’re afraid of him. Some of his violent actions give them a point. To its credit the movie doesn’t make Lee into a martyr or treat the townspeople as a lynch mob. Most of us take chances, act irresponsibly or make stupid mistakes in our lives, yet somehow we squeak by. I know I wake up every so often, suddenly concerned by a stupid thing I did twenty or thirty years ago. Nobody’s perfect, and maybe it’s just my blessed luck not to have my life turned upside down by some tragedy I caused. Lee Chandler is a problem case whose anguish is never going to go away. But we do see him persevering, going forward and trying to do the right thing. That’s a sign of strength that shows the possibility of healing. That’s not depressing.

One doesn’t have to tilt a screen story in an ‘inspirational’ direction to show real-life drama as it plays out in everyday tragedy. A good film with a similar subject given a standard old Hollywood approach is the 1951 Ray Milland potboiler, Night Unto Morning. 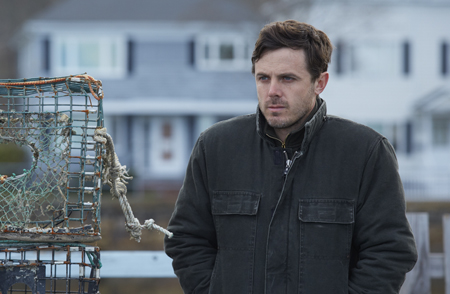 Lionsgate’s Blu-ray + DVD + DVD + Digital HD of Manchester by the Sea looks fine in Blu-ray HD. It appears to be a digital shoot. I’m not sure how to even judge today’s cinematography, as almost all movies are consistently attractive. When shot on real film, the new stocks are so sensitive that lights are barely needed at night; and stylistic touches are generally subdued in pictures that aren’t outright fantasies. Most any mood or effect can be created or changed in post, to a certain extent. The digital shoot for Manchester possibly made the film much cheaper, in this case enabling the director and his actors to shoot for stronger performances.

The disc has two thoughtful promo featurettes. A more standard making-of-piece is what we’d expect, while A Conversation gives us writer-director Kenneth Lonergan talking about his movie. Lonergan has some interesting writing credits, ranging from comic book movies, to comedy, and work on a Scorsese epic.

Interesting as well is a selection of deleted scenes and scene extensions. This cannot have been an easy film to edit, as just deciding on a suitable pace must have been difficult. I was most taken with one deleted scene. Lee gets all dressed and ready to attend a funeral, but cannot bring himself to go because doing so is just too painful. Perhaps he believes he’d go insane if he went. Lee Chandler is in a private Hell, that’s for sure. It’s the one deletion I think should have been kept in the picture.

The DVD disc included has the same extras as the Blu-ray, and the codes for the Digital download are enclosed inside.