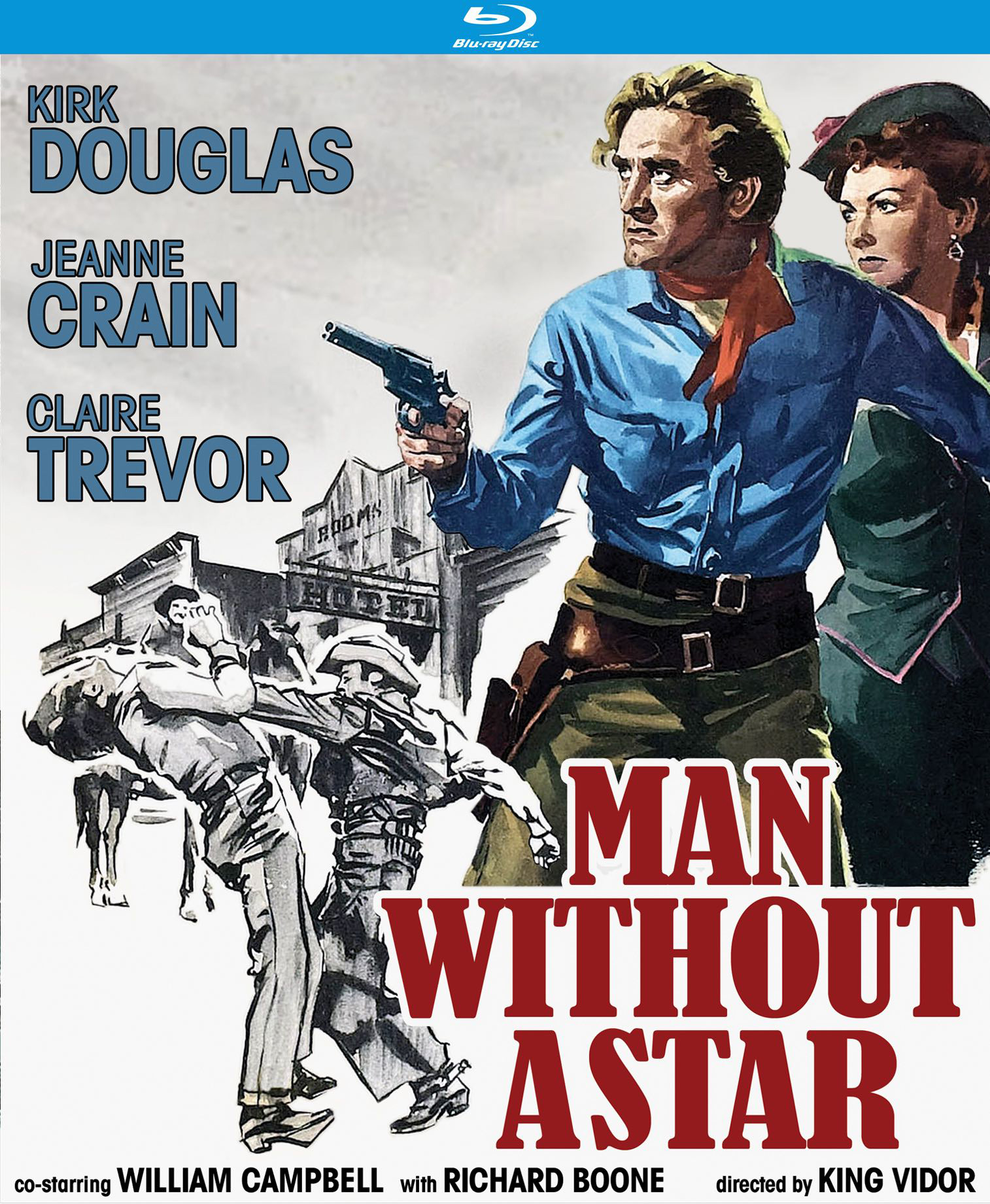 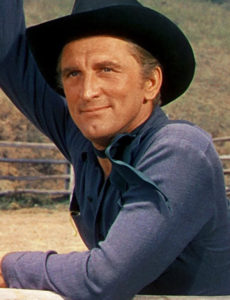 King Vidor, the director behind the bucolic Kansas sequences in The Wizard of Oz and the histrionics of Duel in the Sun, has it both ways in 1955’s Man Without a Star starring Kirk Douglas.

Douglas follows his director’s lead – acting primarily with his teeth, the eager to please ham gives a performance almost as broad as his wayward sailor in 20,000 Leagues Under the Sea. But as screenwriter Borden Chase slowly pulls back the masks on his characters, Douglas settles into a more reasonable approximation of a human being.

Closing in on 40, the irrepressible show-off plays a wandering cowpoke named Dempsey Rae who follows constellations for clues to his destiny and so far he’s come up empty – the “man without a star.” For one too many days the easygoing cowboy has made his home in a boxcar and is happy to go wherever it takes him but his unlikely friendship with a greenhorn named Jeff Jimson throws a monkey wrench into plans he never had. 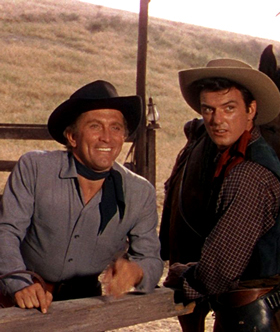 That fragile bond will be tested once Rae and Jimson are dumped on the outskirts of a dusty Wyoming cowtown accentuated by bad-tempered deputies and good-natured hookers.

Always ready for what may come, Rae turns on the charm and with Jimson as his virtual shadow, they both find work on a cattle ranch owned by an imperious out-of-towner with the gender-friendly name of Reed Bowman, played by Jeanne Crain.

The first part of the film plays like a more grown-up version of The Roy Rogers Show – good-old-boy antics, embarrassing slapstick and aw-shucks shenanigans (Chase was a writer on Rogers’ 1962 variety show). But with Richard Boone as Steve Miles, the film’s snake in the garden, more serious conflicts can be expected. Miles is one of Reed’s cattle drivers – making it three men intrigued by the lady, each for different reasons.

Rae’s interest is nakedly carnal and it’s reciprocated – Reed trades him a job for “favors” – while Jimson’s attraction is part schoolboy crush, part mommy issues. Miles is harder to read, he’s in it for the money and maybe sex but, this being Boone in bad guy mode, the glowering ranch hand also has a distinct craving for blood sport. 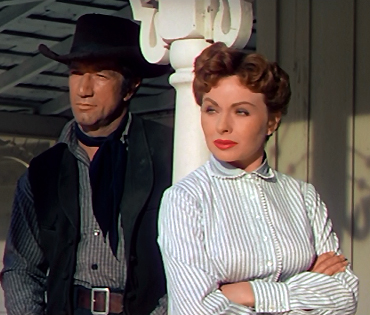 What sets off this powder keg is a length of barbed wire – nearby ranchers are using it to fend off Reed’s plans to expand her range. Rae reacts to the prickly wire like a vampire to a crucifix – his ruined torso tells the story of what can happen to a man who gets too close to the stuff. Those wounds are the result of a range war in which his brother was killed – he’s scarred inside and out and explains why he’ll do anything to protect young Jimson whether the threat is cutthroat ranchers or avaricious women.

Chase’s screenplay lays out the moral dilemmas like a connect-the-dots game and Vidor’s even-handed direction lets the actors, as John Huston once said about his own cast, “stew in their own juices.” Certainly Douglas and Boone are up to the task and Campbell, eleven years away from Jack Hill’s Blood Bath, manages to make his wide-eyed character quite touching. Claire Trevor paints her seen-everything role in a few deft strokes – she gives the best performance in the film (she won an Oscar working for Huston in Key Largo where she received similar direction.*)

The central drama in Man Without a Star – a makeshift family unit improvised by three lost souls – might be better handled by Nicholas Ray and a CinemaScope frame ala Rebel Without a Cause. There are ripely Freudian situations to be considered as Reed takes on Jimson for a temporary “beau” – mom seduces the son to pay back dad – but Vidor’s discreet direction doesn’t make much hay of those moments (and probably for the best). 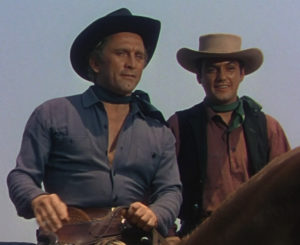 Crain is good at evoking a frosty demeanor but is unable to suggest the tempest inside – she’s all exterior and the script barely takes notice of her transactional attitude toward sex. The movie’s supporting cast and crew is its own reward including Mara Corday, Paul Birch, Myron Healy and composer Hans J. Salter – this is a Universal-International production through and through.

That other Universal stalwart, the great cinematographer Russell Metty (Touch of Evil, Spartacus), turns in a somewhat lackluster performance and the new Blu ray from Kino Lorber reflects that. The image is occasionally soft but the color scheme is fairly vibrant (the picture is also framed in the oddball 2.00:1 aspect ratio – so close to 1:85 it’s near imperceptible – except in the opening U-I logo which looks cut off at the knees… and head).

Kino’s extras include a new commentary from Toby Roan and a selection of trailers, most of them starring Kirk Douglas.

*Huston to Trevor – “You’re the kind of drunken dame whose elbows are always a little too big, your voice is a little too loud, you’re a little too polite. You’re very sad, very resigned.”