One of the strangest ‘uplifting moral tales’ of the 1950s was a huge hit, and launched Rock Hudson as a major star. Criterion’s deluxe presentation puts it on a par with world cinema, mawkish Kitsch-O-Rama and all. Comes with a restored copy of the slightly less head-spinning 1935 version, too. Co-stars Jane Wyman, Barbara Rush, Agnes Moorehead, and Otto Kruger, whose moral guidance has something to do with ‘contacting one’s power source.’ Oh, it’s about recharging my iPhone! 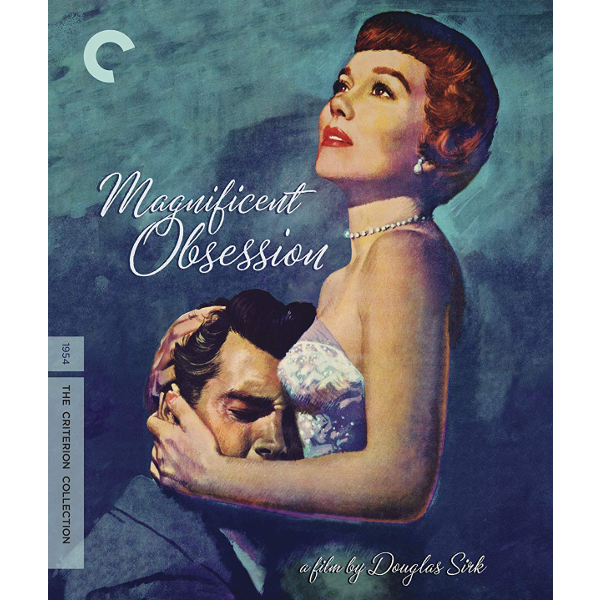 It’s not difficult to admire Douglas Sirk, a director who combined technical artistry with a solid dramatic sensibility. We just reviewed his terrific drama The Tarnished Angels a few months back, and we’re still impressed by his WW2 anti-Nazi potboiler Hitler’s Madman, the PRC movie that turned out so well, it was purchased by MGM; its success took Sirk from his chicken-farm-in-exile and launched him with Hollywood. We’re anxiously awaiting a promised Kino Lorber Blu-ray 3-D disc of Sirk’s Taza Son of Cochise: 3-D pictures by top-rank directors are always welcome.

Criterion Collection honors have fallen on Douglas Sirk before, with his high-octane 50’s soap operas All that Heaven Allows and Written on the Wind. Beloved by critical studies film graduates for their easily outlined visual themes, Sirk’s movies were also immensely popular when new. 1954’s Magnificent Obsession stands apart as one of the highpoints of 1950s kitsch insanity. It’s a ghastly blend of outrageous plotting in support of a strange self-realization ‘philosophy.’

Magnificent Obsession is a remake of an only marginally less grotesque 1935 film. Universal adapted Lutheran-ordained minister Lloyd C. Douglas’s 1929 novel into a glossy, artificial soaper that downplayed the miraculous aspect of the story in favor of absurd melodrama. This 1935 Magnificent Obsession (included on this Blu-ray) is a rickety stack of accidents and ironies. One lightning-fast ellipsis leapfrogs over a number of years, instantly transforming Robert Taylor’s playboy into a Nobel Prize-winning (!) surgeon. The utterly charming Irene Dunne is left adrift in a plot that effects a transcendent finish by curing a serious handicap. Comedy relief is sandwiched in between the sober sermonizing and sacrificial nobility. It’s all a sublimated fantasy of erotic longing. Depression-Era audiences apparently ate it up.

The even stranger 1954 remake poses some truly twisted notions about personal responsibility and the meaning of ‘miracles.’ (Total, complete spoiler:) A famous brain surgeon dies because a needed resuscitation device is being used to save the life of an irresponsible playboy. The playboy at first brushes off his guilt (?), but is drawn to the surgeon’s young widow. His thoughtlessly unwelcome attentions inadvertently lead to another terrible accident, in which the widow is blinded. Inspired by the dead surgeon’s philosophy, the young playboy helps the widow from afar, completes his medical school training and becomes a prominent surgeon himself. When he finally finds his lost love, he restores her sight.

If the plot sounds preposterous, rest assured that my synopsis is accurate.

When star Jane Wyman was looking for a hot vehicle Magnificent Obsession must have seemed just the ticket. Stories about serious handicaps are a genre unto their own; the flashy movie star in the cynical-funny Get Shorty got the Oscar for playing “that crippled gay guy who climbed Mt. Whitney.”  Future non-First Lady Jane Wyman knew the drill: her stint as the soulful deaf mute in Johnny Belinda had scored an Oscar, and this show would rack up an additional nomination for her. Playing blind was probably a more desirable alternative than losing a leg, as James Stewart had done in 1949’s The Stratton Story.

Sirk’s remake is a fascinating cultural aberration. The story has been fleshed out with more oddball philosophy. With a strange smile on his face, Otto Kruger drifts in and out of scenes lecturing about a magical secret of happiness and self-improvement that involves contacting one’s ‘power source.’ One’s ‘power’ can be accessed by helping other people, but only in secret. Unfortunately, what we see is a contrite millionaire playboy — now played by the handsome Rock Hudson — manipulating a widow’s life behind her back. The rest of the characters seem to think this is the way one expresses love, but that’s nothing odd, because they exist in a fantasy bubble of maudlin emotions and noble self-sacrifice.

I plead guilty to harboring a total contempt for this picture’s premise. To my mind it suffers from a specific kind of Presbyterian Guilt, an exaggerated sense of responsibility & moral obligation. The playboy is of course not really responsible for the death of the famous surgeon, but the movie insists on a guilt dependent on the moral judgment that some lives are more worthy than others. The playboy’s accident was reckless, but where does one draw the line? If the playboy had an ordinary accident, the widow and her friends would be just as willing to condemn him.

The creepiest addition is the music score by Frank Skinner, which regularly reaches for ethereal effects, including a heavenly choir. It’s downright sinister. The painfully trite dialogue is often unintentionally funny; we can easily imagine an Airplane!– like parody version. Rock Hudson became a full-fledged star playing this film’s Jekyll-Hyde playboy, while Agnes Moorehead soldiers through, doing the heavy lifting in a storyline overloaded with unlikely events and spurious motivations. Jane Wyman is a women’s magazine cliché from start to finish. It’s more than a little ironic when the former Mrs. Ronald Reagan’s romantic fling in Switzerland sees her attending a folk festival that involves burning a witch — a straw dummy — on a bonfire. Were the writers screaming to express subversive outrage as well?

Douglas Sirk’s approach is fundamentally cinematic: his intense visual stylization doesn’t express the film’s themes as much as embody them. As essayist Geoffrey O’Brien states, his method goes deeper than simple irony. Sirk’s best movies indeed cut under the surface of the Fifties Consumer Lie, and it is possible to interpret the films as critiques of the artificial construction of Hollywood Movie Reality.

But only Sirk followers sold on the director’s style will find Magnificent Obsession to be a good movie. The prevailing critical assessment of Sirk — that his glossy films subvert their own subject matter, that he’s on a secret mission to undermine the hypocrisy of the 1950s — goes a little too far. Sirk directs Magnificent Obsession without betraying a hint of irony. Unlike his other melodramas, it makes no comment on modern life beyond an endorsement of a fantasy philosophy that’s as fuzzy as The Force in Star Wars. I think Sirk is a master stylist who does best when he sticks to a certain kind of content. His appalling Battle Hymn has the exact same lush Sirk surface, yet is a distasteful mix of religion and Cold War propaganda, a rationale for slaughter.

In 2002, director Todd Haynes undertook a Sirk Revival movie called Far from Heaven. Haynes accurately approximates the Technicolor sheen of Russell Metty’s women’s magazine imagery, producing an odd sort of parody. Far goes straight for the facile notion that the 1950s was THE decade of sexual repression, and ends up a collection of nostalgic effects. Sirk’s originals, being a strange confluence of art, crass commerciality and cultural context, were more than the sum of their parts.

The Criterion Collection’s 2-Disc Blu-ray of Magnificent Obsession contains a beautiful restored transfer of Sirk’s (biggest?) hit, encoded at the studio-prescribed aspect ratio of 2.00:1 — they could have converted it to Superscope and come up with the same screen shape. I compared it to the 2008 DVD, and the colors look cleaner, and the optical transitions smoother.

Disc producer Johanna Schiller’s extras are mostly repeats from that older DVD; I believe that the interview with screenwriter Robert Blees may be a new addition. Outside of the commentary, little or no mention is made of Sirk’s influential producer Ross Hunter or the films’ writers. Disc one features the personable commentary of Thomas Doherty, who lends ample support to the theories about the film. Directors Allison Anders and Kathryn Bigelow appear in interviews, praising Sirk and explaining their personal relationship to his work.

Criterion must really love this picture. A second Blu-ray disc contains a newly restored encoding of the earlier version of Magnificent Obsession (102 min.) from 1935. Its director John M. Stahl helmed the Claudette Colbert version of Imitation of Life, also remade by Sirk. Then comes the best extra, Eckhart Schmidt’s feature length 1991 interview piece in which the highly intelligent Sirk discusses his career and movies. For a capper, the film assembles several long takes filmed from a car moving down Hollywood Blvd. in early 1980, possibly taken by Gary Graver. Kramer vs. Kramer is playing at the Warner Pacific and The Ninth Configuration is on the marquee at Grauman’s Chinese. We also get a look at the legendary Larry Edmunds Bookstore in its old location next to The Supply Sergeant, a surplus store. Back in the 1970s, Larry Edmunds was one of the few places to go to find literature on directors like Douglas Sirk.

Critic Geoffrey O’Brien contributes an informative and persuasive essay. I must be in a minority, because Magnificent Obsession is roundly hailed as a masterpiece. I am sold on Sirk’s eminence as a consummate auteur, with exceptions like Battle Hymn and Magnificent Obsession; I finally saw his A Scandal in Paris and Summer Storm, and found them just as good as his more famous ’50s pictures. And where’s a disc, in any form, of A Time to Love and a Time to Die? I’ve only seen snatches of that pan-scanned.

The trailer features a personal appearance by Jane Wyman, who walks on-screen to assure us she was very moved when offered the script. It also emphasizes the main reason the film was made — it’s a follow-up to the previous year’s hit The Robe, which began with another novel by Lloyd C. Douglas.