The story of Mildred and Richard Loving could easily have become a sledgehammer epic about social injustice. Writer-director Jeff Nichols instead sticks to the facts and recounts their ordeal with a quiet subjectivity that neither exaggerates nor sanctifies. The result is a marvelously affecting demonstration of how a civilized, progressive America rights a wrong. Ruth Negga and Joel Edgerton are terrific as just plain folks oppressed by an obsolete law. 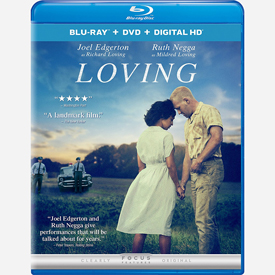 Growing up in the 1950s, interracial marriage was a strange subject, and major entertainments handled it with kid gloves. There always seemed to be a warning in their approval of the romances in entertainments like South Pacific and Sayonara. Yes, the loving couples in those movies were in the right, but mixing races made them into social outlaws. In private, the argument would always lead to, ‘and what will the children be?’ With marriage rights now being extended, the story of Mildred and Richard Loving is more inspirational than ever. The American system of courts is superior, and good evidence for that is the Loving story. 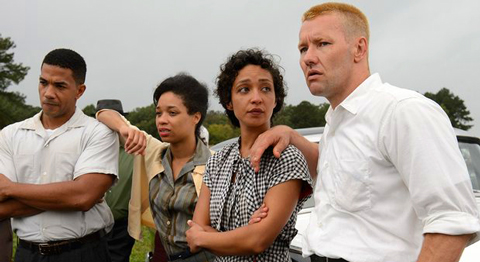 I’m pretty sure that as a teenager I glanced at pictures of the Lovings in Life magazine, and didn’t have much of an opinion. The Civil Rights issue was something that went by quickly on the six o’clock news, and we nodded our heads in approval and moved on. Your average biopic or feature film about race issues these days runs a gamut between persuasive relevance (The Help, 2011) and shows like Lee Daniels’ The Butler, which comes off as more of a PC civics lesson. If one is really wants to learn about the Civil Rights movement, I recommend the documentary King: A Filmed Record… Montgomery to Memphis, a compilation of prime-source newsfilm and speeches, mostly by Martin Luther King. There’s a lot more to Dr. King than the “I have a dream” quote.

Interestingly enough, the most influential movie about interracial marriage is still the flat footed but consciousness-raising Stanley Kramer picture, Guess Who’s Coming to Dinner. It came out in December of 1967, six months after the Loving v. Virginia decision was handed down. A little reading revealed something that was news to me — anti-miscegenation laws existed in almost all the states, not just in the South. A number of states repealed their statutes before the Loving decision, but California wasn’t among them. 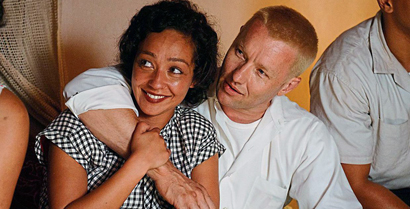 On to Loving, an entry in this year’s Oscar-bait league that’s thoroughly enjoyable without any knowledge of the historical case. It’s a love story plain and simple, about two decent people that just want to be together and live their lives free of interference. The most politically charged line of dialogue in the movie comes from Richard Loving, who has little or no interest in changing the world and doesn’t even want to witness the arguments before the Supreme Court. “What should I tell them?” his lawyer asks. Loving responds, Tell them I love my wife.”

In Virginia in 1958, bricklayer Richard Loving (Joel Edgerton) lives in a peaceably integrated county and likes to work on drag racers with his friends, who are mostly black. He falls in love with Mildred Jeter (Ruth Negga), who lives at home with her family. When she becomes pregnant, Richard immediately proposes marriage. They perform the ceremony across the state line in Washington, D.C., but it doesn’t take long for word to get out. Sheriff Brooks (Marton Csokas) arrests them in the middle of the night. A Judge orders them to divorce, or leave the state for 25 years and not return together. They move in with relatives in D.C. but are re-arrested when they come home to deliver Mildred’s baby. Narrowly escaping long prison terms, they must live in D.C. Mildred is discontented living away from her family, and raising her three children on the city streets. Inspired by The March on Washington, she writes a letter to Attorney General Robert Kennedy, who directs her to interested parties at the ACLU. Although Richard has little faith in the system, he doesn’t block Mildred’s wishes. The enthusiastic attorney Bernie Cohen (Nick Kroll) teams with the more experienced Phil Hirschkop (Jon Bass). They induce the Lovings to re-enter Virginia, so as to set in motion trials and appeals that can advance the issue to the Supreme Court. The fear is that the Court won’t accept the case. 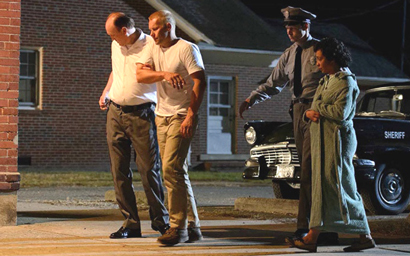 Are we entering an age of restraint in quality filmmaking, of Less Is More? One reason that Loving works is that it doesn’t use fancy directing tricks to manufacture social heroes in Mildred and Richard. If anything the film has a touch of the same post- neorealism seen in such impressive pictures as Manchester by the Sea and Moonlight. Events are not shoehorned into dramatic patterns, with characters making position speeches. ‘Meaningful’ conflicts are not cooked up to illustrate the author’s messages. The Lovings’ story is allowed to play out is a straight narrative without flashbacks or asides. We worry when the couple appears to be in jeopardy, and feel unhappy when Richard does not find some expeditious way to save Mildred from spending a weekend in jail. The Lovings are far from the spearhead of Civil Rights activism, and just want relief from marital persecution.

The movie doesn’t even exaggerate their attractiveness. Mildred is cute but quiet, and rather shy except when the welfare of her children is concerned. Richard doesn’t claim to be a big intellect. He’ll laugh at Mayberry R.F.D. but wouldn’t want to discuss it. He hasn’t much to say about anything, not even the hot rods he likes to soup up. When chided for having only black friends — by one of his black friends — Richard doesn’t stick up for himself. The Loving marriage is thoroughly conventional. Mildred defers to Richard’s obstinacy but knows he’ll be there for her. His loyalty is unwavering. One shouldn’t have to be Spartacus to enjoy some peace and respect in this world.

Loving takes a calm approach to its topic. We must endure the Lovings’ nine-year ordeal like they do, as a steady grind. Mildred is the one to write Bobby Kennedy, an act that takes quite a bit of spirit. It’s like someone says, there’s so much civil rights outrage around, why shouldn’t this injustice be addressed? In truth, the ACLU surely saw the anti-miscegenation laws as a winnable Supreme Court shoo-in, a piece of cake after the earlier legal battles and another brick out of the wall of State’s Rights.

The business-as-usual approach to events stresses that the Lovings were never celebrity seekers, quite the opposite. The Life photographer (Michael Shannon) who snaps the candids of their home life seems impressed by their plain-folks quality. The one thing I may have missed is the technical jeopardy that the Lovings risk when they purposely flaunt the law one more time, so as to initiate the appeals process. Had things changed in the interim, so that a Virginia judge wouldn’t feel comfortable denying them bail? If they lost their case in the highest court in the land, could Virginia have imposed long prison terms? Mildred and Richard don’t advertise the weight on their shoulders… which reminds us that many people go through life with nagging unresolved issues. The beauty of Loving is its happy ending. Richard and Mildred are finally able to build on that acre of land just down the road from her family. If that part of the story is a fib, I don’t want to know about it.

Ruth Negga and Joel Edgerton are great actors to observe. Their words and gestures ring true – they behave like non-demonstrative real people, not movie characters in a melodrama. Done up with his bad teeth and hunched stance, Richard is not charismatic by any Hollywood measure. But he’s a good guy and would make a great neighbor and friend. The supporting characters are seen as the Lovings see them — Mildred’s sister is emotional and a little demanding. We worry that the hotshot ACLU lawyers might be more concerned with career advancement then helping their clients. If only more issues in our society had as little built-in conflict of interest.

A closing bit of praise for this emotionally satisfying picture is that it doesn’t make a political argument beyond its specific subject matter. On the other hand, viewers will surely think forward to the present state of the marriage equality movement. Call this review of Loving, enthusiastic.

Universal Studios Home Entertainment’s Blu-ray + DVD + DVD + Digital HD of Loving has warm colors that show off rural Virginia’s beauty in over half the movie’s running time. The show was shot on film with particularly sharp lenses, or so it seems — the images create a feeling, at least, of un-manipulated reality.

The package contains a host of featurettes that range from the usual making-of video to examinations of the historical court case, the film’s cast and the Virginia locations. Director Nichols offers a full commentary as well. As often happens, we’re surprised to find that American characters with specific regional dialects are played by an Australian and a New Zealander. Ms. Negga was born in Ethiopia and speaks with an English accent. I think they would fool anybody.