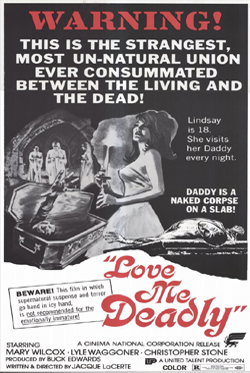 No further evidence is needed that the 1970s were the anything-goes era of American filmmaking than this bizarre cult item that has understandably fallen through the cracks over the years. An attractive daddy’s girl satisfies her strange need to copulate with cadavers by joining a necromantic cult. Although the cultural March of Progress eventually led to such modern achievements as Jorg Buttgeriek’s much-banned Necromantik series, where people have onscreen sex with corpses, this low budget programmer is a notably outre entry for the grindhouse trade of the period.