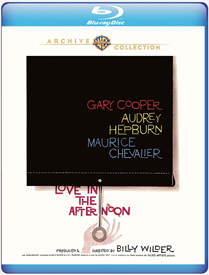 A favorite of Billy Wilder-philes, Love in the Afternoon is a strong expression of the ‘romantic-Lubitsch’ vein in Wilder’s work. It’s essentially a return to the early ’30s Lubitsch comedies with Maurice Chevalier, but played in a more bittersweet Viennese register. It’s also Wilder’s first collaboration with the comedy screenwriter I.A.L. Diamond. Together they fashion the predominantly verbal comedy machine that will carry them through three or four big hits, and a few losers that have become classics anyway. Love in the Afternoon was engineered as Wilder’s producing breakout, in a special arrangement meant to make second-rate Allied Artists into a major player. William Wyler came up with Friendly Persuasion for his part of the deal, but John Huston’s third film never materialized. Allied Artists went into decline while its top executive Walter Mirisch, along with his brothers, formed their own company to cater to established filmmakers looking for a better deal than the studios would offer. 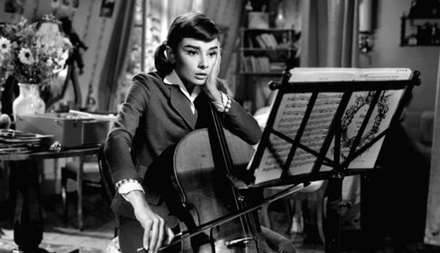 Love in the Afternoon was not a success, even with the presence of audience favorite Audrey Hepburn. Many romantic comedies in 1957 called for color, but Wilder’s film ended up with Gary Cooper in the main role, and it is said that color would only have made him look older. At age 57 Cooper seriously showed his years, and cameraman William Mellor was obliged to use filters and other tricks to soften his wrinkles. Cooper had almost a thirty-year head start on his co-star, a May-December match that disturbed some critics. With its old-fashioned sentimental screenplay, old B&W looks and an old guy for its star, the film wasn’t going to attract audiences hot for more-trendy thrills with Marlon Brando or Paul Newman.

Part of the film’s story comes from the novel Ariane by Claude Anet, which had been made into a 1931 movie that Billy Wilder likely saw in Germany. The partial synopses I have read mention only a simple Russian girl who falls in love with an experienced man with many lovers, and who keeps his interest by making up an extravagant love life for herself. Wilder and Diamond’s adaptation is their expected tightly scripted comedy of secret relationships set in a realistic but highly romanticized Paris. Barely old enough to kiss, dreamy-eyed music student Ariane Chevasse (Hepburn) is obsessed with the ‘kiss & tell’ case files of her father Claude, a busy bedroom detective (Maurice Chevalier). Claude does his best to shield Ariane from his sordid work, but she becomes completely involved when she intervenes to save one of Papa’s clients, millionaire playboy Frank Flannagan (Gary Cooper) from being shot by a cuckolded husband, Monsieur X (John McGiver). Flannagan is captivated by the audacity of his savior. Ariane feigns the sophistication of an adventuress, and refuses to identify herself. Frank is confused by Ariane’s encyclopedic knowledge of his various scandals and dalliances, in cities scattered across the globe. Claude thinks his daughter is happily attending concerts with her music school boyfriend, when she’s really waiting for Flannagan to return to Paris. Ariane is learning how painful love can be – she pretends to have control but is actually enraptured by a playboy who professes to have no interest in permanent amorous relationships. She can’t possibly tell him the truth about herself. Flannagan becomes so distracted that he takes Monsieur X’s advice, and hires a great detective to find out who his mystery lover is… Ariane’s father Claude. 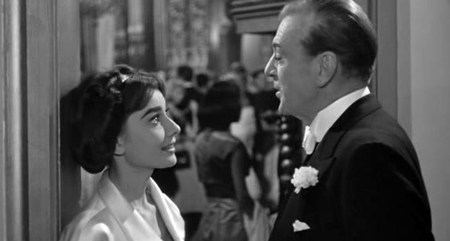 Love in the Afternoon was considered vaguely improper in 1957, with the (elegant) old rake Gary Cooper robbing the cradle in his pursuit of the ‘fifties favorite ingenue. It’s been pointed out that a couple of dialogue lines might have been added to the script to suggest that Flannagan and Ariane do not actually sleep with each other, a development that would seem absurd. Part of the Lubitsch-like dating rituals put Frank Flannagan’s seductions on a timetable, the main event apparently following closely on the exit of the discreet Gypsy musicians he hires to provide mood music, as in a silent movie. Ariane is no sex kitten, nor cheap tease, nor adolescent Lolita – she’s a thoughtful, independent pilot of her own heart, and gives herself to Flannagan out of pure love, knowing full well that she’s jumping off a cliff. A more naturalistic story might have Ariane become pregnant. She’d marry her faithful but uninspiring fallback boyfriend Michel (Doud) and dream forever of her lost love. In Wilder and Diamond’s world of amazing coincidences and romantic reversals, the opposite happens. Without declaring herself, can Ariane penetrate the heart of a determined Don Juan? Is there hope for true love in this world? Once reviled as a cynic, Billy Wilder is actually a ‘romantic realist.’ Real love exists, but there’s always a price to be paid.

In this case Ariane shares her concern with her loving father, who has 1,001 jokes about infidelity yet is acutely aware that his daughter will have to play the same heartbreaking game as every other gambler in love. Wilder’s earlier movies made murder, madness and alcoholic delirium seem real, but the strongest emotion in Love in the Afternoon is the father’s love. Just as Ariane and Frank’s story is turning into a traumatic fairy tale, Maurice Chevalier’s detective Chevasse becomes the show’s selfless hero. Claude knows that any attempt to dissuade Ariane would be hopeless. Instead of causing a scene, he asks the international playboy to throw Ariane back, as she’s such a small fish. He begs for her heart to be broken instead of her life ruined. 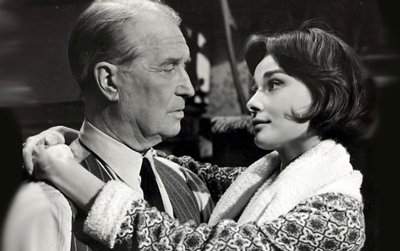 Yet Love in the Afternoon was met with stern disapproval by various censorship organizations. Compare its ultimate compassion (in a romantic farce, yet) with the ‘wholesome’ musical Gigi made just a year later. An upper class Frenchmen seeks a ‘fresh’ courtesan, and Leslie Caron’s initiation into a world of glorified prostitution is treated as desirable. Maurice Chevalier sings a song with lyrics that appear to endorse child prostitution, with underage girls being the most desirable. All Love in the Afternoon does is acknowledge the existence of Parisian hanky-panky, and the fact that innocent daughters don’t stay innocent forever. Yet it is the show considered to be immoral.

Wilder and Diamond are comedy formalists. None of their jokes is gratuitous, and nothing in their screenplays is thrown away. Subscribing to the notion of narrative economy, most of their jokes relate directly to a main theme or character. Most return later in the show, with added resonance. Wilder-philes soon realize that his movies repeat similar jokes and themes with subtle differences and contexts. Frank’s hired musicians are present in one form or another in several Wilder films, not just ‘there’ but commenting on the story and taking an active part in whatever romance is building. Individual jokes come back, as do melodramatic situations. Ariane is lucky that Wilder didn’t want to repeat the suicide attempts of her earlier Sabrina. The director was occasionally mis-characterized as treating actresses roughly, and the suicide attempts in his movies led some critics to charge him with misogyny. 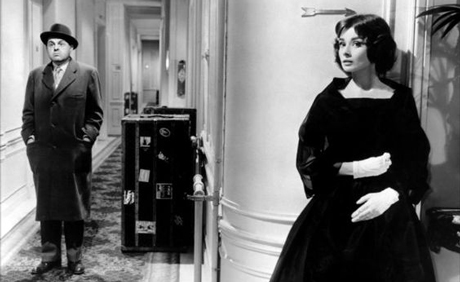 Like many Wilder films, the show has the delightful verbal density of a good play. In his first film, John McGiver gives an excellent comic character turn the dumbbell husband with a brain like Elmer Fudd. There are also plenty of visual gags, including an opening montage of lovers in Paris, and the witty dossier on Frank Flannagan, with his face in the scandal news and a magazine cover celebrating him as Confidential’s Man of the Year. We’ve read the story that, because Pepsi -Cola is one of Frank Flannagan’s business interests, Wilder later decided to favor Coca-Cola for his farce One, Two, Three. But other inter-movie connections are almost creepy. At one point Frank makes a remark about a lover being unreliable because she was a saxophone player. I can think of naughtier ways to interpret that statement, but it looks directly forward to a running gag about musicians in Wilder and Diamond’s Some Like It Hot, made two years later. Was that story already partly sketched out?

The film’s lasting impression is not big laughs, but the sting of a bittersweet romance. The famous ending on the train platform is painful to watch because it intensifies emotional rewards that rarely come true in our real lives. A key moment to understanding Love in the Afternoon occurs in the scene at the opera. Not having seen his conquest Ariane for a season or two, Frank Flannagan, walks right past her in the crowd, even though she’s beaming at him waiting to be acknowledged. That scene connects sharply with a painful recurring motif in Max Ophuls’ Letter from an Unknown Woman. In that defining story of romantic sacrifice, a deserving girl’s lifelong love for a famous man is discarded, ignored and overlooked in increasingly cruel ways. These are the same forces of romantic reality depicted in some of Billy Wilder’s best work. In the broader picture of predatory amour and the double standard, Gary Cooper is fully appropriate for the role of seasoned seducer. When Billy Wilder released Love in the Afternoon to the uncomprehending commercial audience of 1957, he was casting pearls among swine. 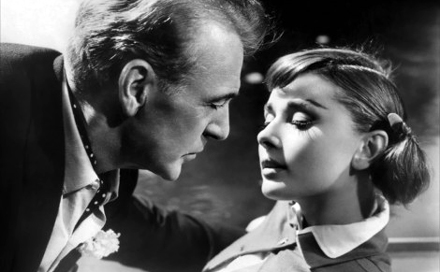 The Warner Archive Collection Blu-ray of Love in the Afternoon is a smooth encoding of this ‘special’ Allied Artists release. Although Billy brought a Hollywood cinematographer with him to Paris, this is the show where Wilder connected with the consummate designer Alexandre Trauner, who would work on most of Wilder’s movies from here forward. After the classic Paramount look of his Charles Brackett collaborations, Wilder’s films had rambled between styles. With Afternoon he settled on a slightly low-contrast ‘French’ B&W visual look and stayed with it for several years, adding Panavision with The Apartment. On this disc Love in the Afternoon doesn’t look quite as sharp as we expect, yet it seems correct; the encoding is exact enough for us to detect some of the gauze & filters used to soften and gray- out Gary Cooper’s wrinkles. Perhaps it’s psychological, but it is a bit distracting to see Cooper, one of the most handsome stars ever, given more glamour protection than that afforded Gloria Swanson in Sunset Blvd.

Not having a real technical description handy, I refer to the non-contrasty European B&W with the lazy word ‘dusty.’ It looks as if Billy Wilder preferred B&W for the majority of his films. We’re told that he made the bright Some Like It Hot because the cross-dressing makeup would have been ‘too much’ in full color. But there seems no reason for One, Two, Three, Kiss Me, Stupid and The Fortune Cookie not to be in color. Irma La Douce was in color and was his biggest hit. 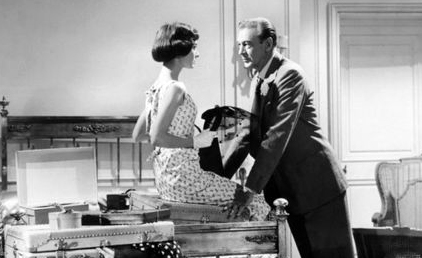 Of special mention is composer Franz Waxman’s superb ‘musical adaptation’ of older romantic songs that had been the mainstay of Ernst Lubitsch pictures, and are associated with Billy Wilder as well. The old tune “Fascination” is modified for very pleasant underscoring, which probably sounded old-school in a year when film scores were leaning on Rock ‘n’ Roll and jazz. To accentuate the crucial dramatic confrontation at the finale, Waxman uses an almost violent pause of musical silence, followed by a sharp violin sting, which feels like lovers trying to catch their breath. This ‘light comedy’ is a bittersweet powerhouse.

The only extra on the WAC’s Love in the Afternoon disc is an original trailer. The original Saul Bass poster art adorns the front cover.