Alan Rudolph goes all mushy on us, but in a good way. This loose, somewhat cartoonish comedy pits detectives Tom Berenger and Elizabeth Perkins on opposite sides of a hot case. All they uncover is one illicit love affair after another… while getting personally involved too. A quirky romantic favorite. 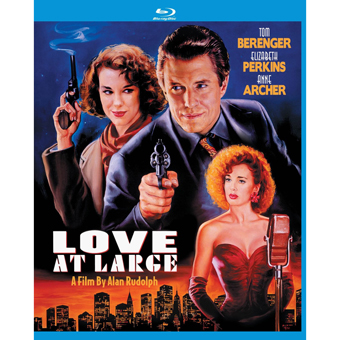 This charming little movie went nowhere in 1990, but it still pleases this reviewer, from its odd performances to the romantic music score. What sounds like a klunky idea for a romantic comedy — dueling detectives in the lonelyhearts racket — becomes one of Alan Rudolph’s most endearing movies. A slightly dense leading character and a lot of quirky situations can’t disguise the fact that Love at Large has its heart in the right place. Tom Berenger affects his voice with a growl that takes some getting used to, but he’s a perfect oddball fit for the underused Elizabeth Perkins. Despite some problems in tone and pitch, this is a satisfying old-fashioned romance.

Private detective Harry Dobbs (Tom Berenger) follows the gangster boyfriend (Ted Levine) of Miss Dolan (Anne Archer). He discovers that the man is keeping two separate lives and two separate wives (Annette O’Toole & Kate Capshaw), in Portland and on a Wyoming ranch. Unbeknownst to Harry, his own girlfriend Doris (Ann Magnuson) is convinced he’s having an affair and has hired another private detective, Stella Wynkowski (Elizabeth Perkins) to follow him. More complications, as they say, ensue.

Peppered with moody love songs ranging from the old standard “You Don’t Know What Love Is” to Leonard Cohen’s “Ain’t No Cure for Love”, Love at Large is a favorite that not everybody warms up to. The comedy is muted, there’s not very much detective action and the tone alternates from rainy Portland nightclubs to romantic intrigues on a wild west ranch. Even the title is a little lacking. Harry Dobbs and Stella Wynkowski are both in the business of watching other people’s relationships break up, while being unable to hold their own together.

Dobbs’ clumsy attempts to smooth over his dealings with his shrill girlfriend Doris or his seductive client Miss Dolan prove Stella’s claim that he’s incompetent at affairs of the heart. Stella criticizes his professional style with the observation that he gets too close to his subjects. Dobbs blunders about, raising the suspicions of the prairie housewife (Capshaw) who herself has a lover on the side (Kevin J. O’Connor). Harry’s crude questions freak out the other housewife (O’Toole) to the point that she breaks down and asks him, seriously, if he is The Devil.

But Stella over-empathizes with her subjects as well. She intervenes decisively when danger threatens in Wyoming, but can’t handle her own old boyfriend (Barry Miller) who selfishly shows up and becomes abusive. Stella and Harry share a warm-hearted streak. Their sentimental soft spots make hash of their respective cases, while leading them directly to each other. 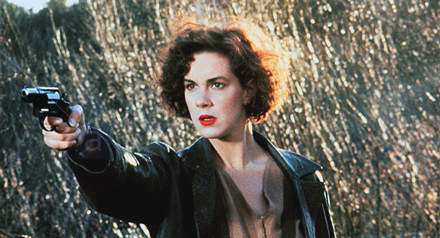 Love at Large probably goes in too many directions at once. There’s a film noir-ish spur that makes Anne Archer into a fantasy love object to confuse Harry, who sees her in his dreams singing in a sultry voice. It’s funny enough but becomes a little static after a while. Keeping this plot afloat depends on hero Harry Dobbs making some pretty silly mistakes. Harry and Stella do a lot of stalking of each other, mostly in cars. This material is also suspended somewhere between realism and parody, with only the Mark Isham music to keep it on track.

The most satisfying material takes romance more seriously. There’s a nice tilt here toward seductive melancholy. Stella reads a book called The Love Manual and can’t resist making soulful speeches about what it means to be in love, complete with the observation that “Those in love are the ones who wait.” Harry experiences an odd partial dream sequence in which the plain-wrap Stella confronts him wearing a Miss Dolan-like evening gown, transforming into the object of his desires. It comes off as a dead end, an interesting fragment.

I saw a slightly longer work print of the picture back in 1990, in which this fantasy element was further developed. There’s at least one more scene where Harry ‘dreams’ that the be-gowned Stella appears in his room, stylized as a romantic vision. I can’t remember, but there also may have been a scene of Stella ‘dreaming’ a vision of Harry. What’s left in the final cut is a single moment where Stella is standing by a curtain. The longer version of the scene played rather awkwardly, as if director Rudolph had failed to make the fantasy element sufficiently interesting to warrant spending time on it. (spoiler) However, removing the dream scenes has lessened the impact of a final surprise: Stella hallucinates Harry in the room again, only to find out he’s really there.

Elliot Davis’ dark photography gives Love at Large an intense look, and the contrast in the real locales (dawn in Portland, afternoon on the prairie) helps with the feeling that everyone in the story is living at least two lives at once. Mark Isham’s music score employs some great guitar riffs to keep things moving in the many stalking scenes.

Career-wise, Tom Berenger kept missing the mark to hit stardom. This pleasing performance is probably too understated to suggest that he’s a comedy natural. Elizabeth Perkins again convinces us she can play anything and still be adorable; too bad a string of blah roles (He Said, She Said) led her to the eventual doom of Wilma Flintstone. Stella and Harry share conversations on a plane and in a bar that evoke the warmth of older screwball comedies:

The supporting cast is always interesting. Anne Archer affects a breathy love-baby vulnerability that borders on spoofy parody. Still, her drop-dead gorgeous appeal convincingly scrambles Harry’s brain, a necessary step to set the plot in motion. Ted Levine was concurrently playing as Buffalo Bill in The Silence of the Lambs, which works in favor of the film establishing him as a possibly dangerous man. Kate Capshaw and Annette O’Toole have fine scenes in their isolated corners of the story, but are given insufficient screen time. Most of the characters are in love and trying to sort out their romantic problems. Love at Large shapes them into a sympathetic ensemble, and builds an overall feeling of romantic hope.

Others don’t come off as well, only because their parts are too peripheral. Ann Magnuson is stuck with the thankless role of Harry’s spiteful girlfriend, a shrill screamer who throws things. Kevin J. O’Connor’s scenes are too brief and Barry Miller’s character shows up too late to be anything more than an unwelcome annoyance. The big surprise is Neil Young’s brief but arresting stint as a gangster, who has Harry beat up and threatens to kill Miss Dolan. The oddball casting meshes well with Rudolph’s offbeat tone, and a brief punch-out in Young’s swank apartment provides some welcome comedy.

The movie has four or five swear words but is otherwise family-friendly; the R rating seems completely unjustified. This is a pleasing picture for romantic creampuffs, like Savant.

The KL Studio Classics Blu-ray of Love at Large improves on the older DVD (from 2004) in that the added sharpness and contrast range retain the richness of Elliot Davis’ cinematography, on the rainy streets of Portland and in the clear air of Wyoming. Rudolph was very much into music-driven drama. The mellow saxophones and guitars come through well, although I believe the audio track is monaural.

An original trailer is included. It strings the jokes together well, but I’m not sure any trailer could capture the film’s quirky quality… which seems always on the edge of awkwardness. The cover illustration from the original poster does double duty, giving the wrong idea about the movie and making the characters look foolish, to boot.