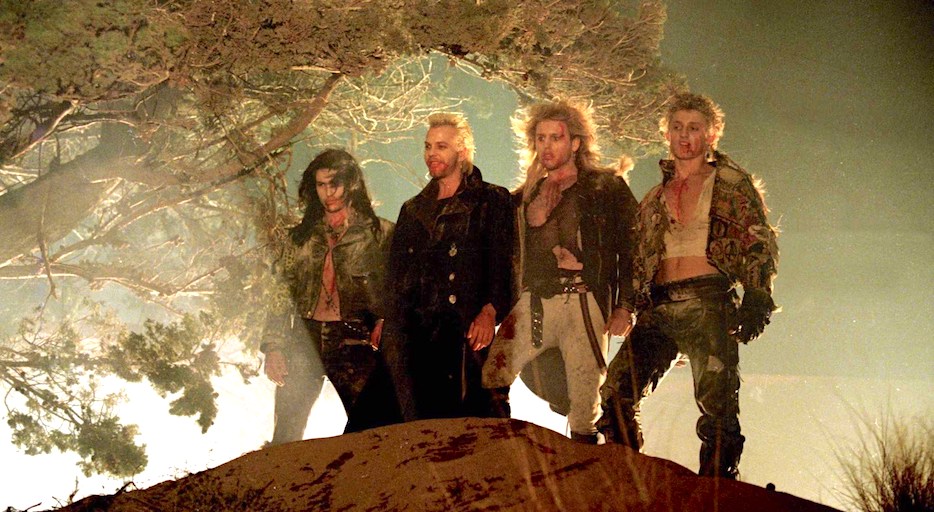 “One thing about living in Santa Carla I never could stomach … All the damn vampires.”

I respectfully disagree with Grandpa’s sentiment. My favorite part about watching the faux coastal fantasia of Santa Carla is all the damn vampires. Despite being very much a time capsule capturing a certain place and cultural moment, The Lost Boys is simultaneously, a bit paradoxically, as immortal as its titular teenage vampires when it comes to being a genre staple. The 1987 horror comedy was helmed by the late great Joel Schumacher, who passed away on June 22nd. It is being celebrated today ahead of its return to Southern California theaters this Thursday at the Mission Tiki Drive-In, on a double bill with that other terrific ’80s vampire horror comedy, Fright Night (1985). It’s hard to articulate just how special and singular The Lost Boys is, but I have to try.

Soon, Lucy and the boys hit Santa Carla’s packed boardwalk, which they find to be loaded with carnival attractions, deluxe video stores, and upbeat saxophone rock. Michael finds himself entranced by the mysterious and evasive Star (Jami Gertz), who unfortunately runs with a rough crowd — the titular “lost boys,” a four-pack of rock ‘n’ roll teens with a nose for trouble led by bleach-blonde beach punk David (Kiefer Sutherland). David and his disciples Paul (Brooke McCarter) Dwayne (Billy Wirth), and Marko (Alex Winter, a.k.a. Bill S. Preston Esq.) quickly goad Michael into a death-defying motorcycle race (Lou Gramm’s “Lost In The Shadows” brilliantly accents this gorgeously photographed sequence on the film’s soundtrack) and a strange initiation into their little club, where Michael is coerced into drinking from an apparent chalice of wine, to Star’s chagrin.

Graphic novel fiend Sam, meanwhile, finds a fully-stocked comic book shop being patrolled by deadly serious teens Edgar and Alan Frog (Corey Feldman and Jamison Newlander, respectively), who gravely advise the horror-averse Sam to read a vampire comic. Little does Sam realize how important this sage advice will be in helping him relay crucial plot exposition throughout the film later. Lucy, desperate for cash, finds work at a video store run by the kindly Max (Edward Herrmann), who takes an instant romantic shine to her. And Lucy in turn appreciates his affectionate advances.

All of this is essential table setting for the chaos that is to follow. Up to this point, outside of two attack sequences where unseen forces prey upon hapless boardwalk denizens, we have essentially been enjoying an unusually evocative and insightful ’80s family dramedy. Things take a turn after Michael’s initiation, because, as he and Sam soon discover, he didn’t drink wine out of a chalice. He drank the blood of a vampire, and he quickly finds himself in the throes of an unwanted transformation, lusting for human blood, keeping unusual waking hours, disappearing from mirrors, and struggling to control a newfound flying ability. 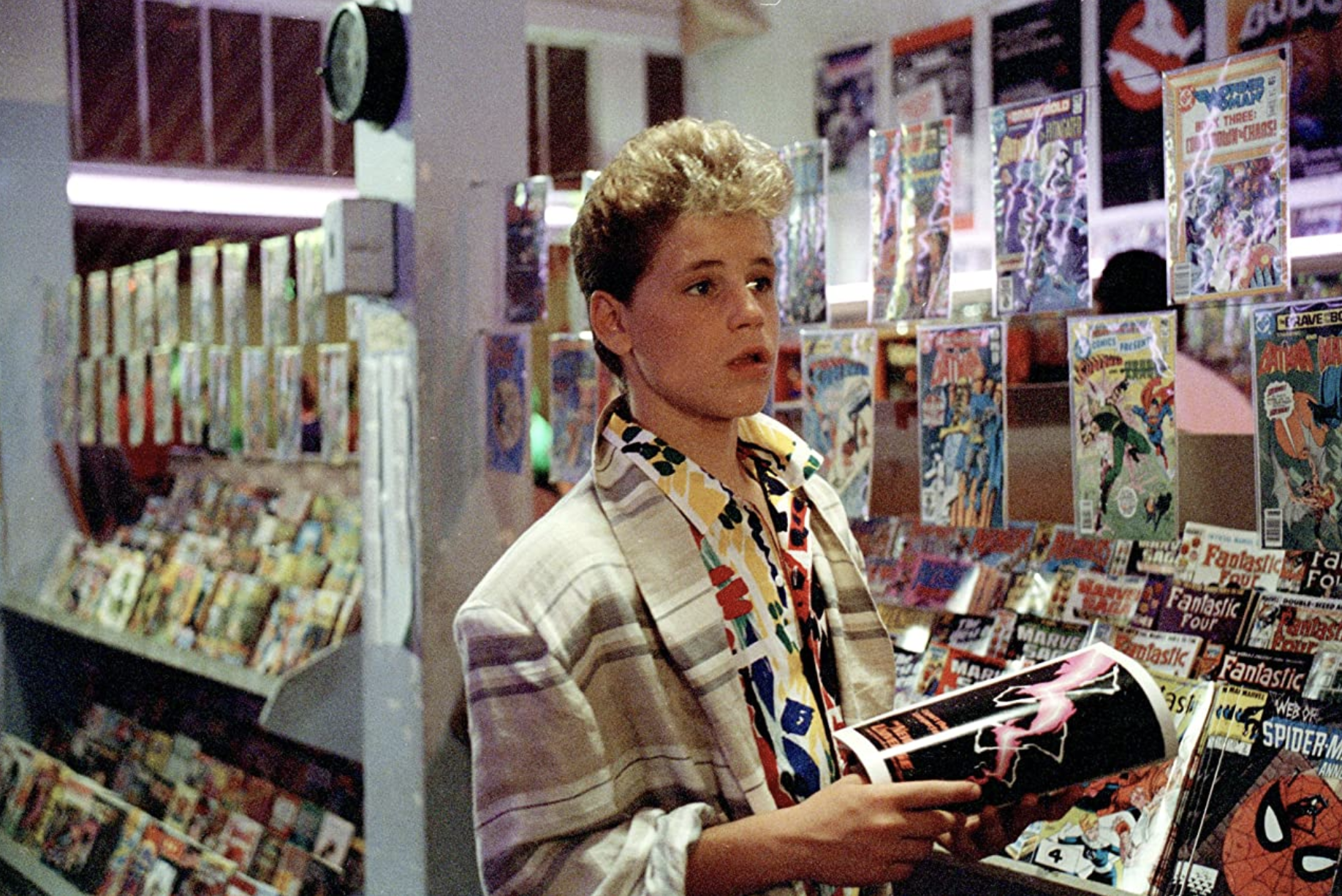 As Sam pieces together what’s going on, he recruits the Frog Brothers to help him discern the identity of the head vampire from whose bloodline Michael now descends. If they can destroy this mysterious leader, they will be able to restore the humanity of Michael, Star, and mop-topped child vampire Laddie (Chance Michael Corbitt), all of whom have yet to feed on humans and thus can still be saved.

The Frog Brothers are the show’s secret weapon. They conduct themselves as if they are bad-ass modern pubescent Van Helsings, and while that may be true, their self-seriousness makes them a ripe source of comedy during the proceedings. During the documentary “Lost Boys: A Retrospective” (available among the film’s Blu-ray special features), Feldman notes that this was all by design. “Basically [Schumacher] gave me an order to go out and rent all the Stallone movies and all the Chuck Norris movies, like Rambo and First Blood and Missing in Action.”

Feldman and Newlander played the Frog Brothers entirely straight because that was the MO Schumacher imparted upon them. “I told them they were Marines, commandos,” Schumacher relayed in a conversation for the same documentary. “They don’t think they’re funny.” Jamison Newlander adds that he “didn’t realize until about halfway through the project that [his performance] was funny.” 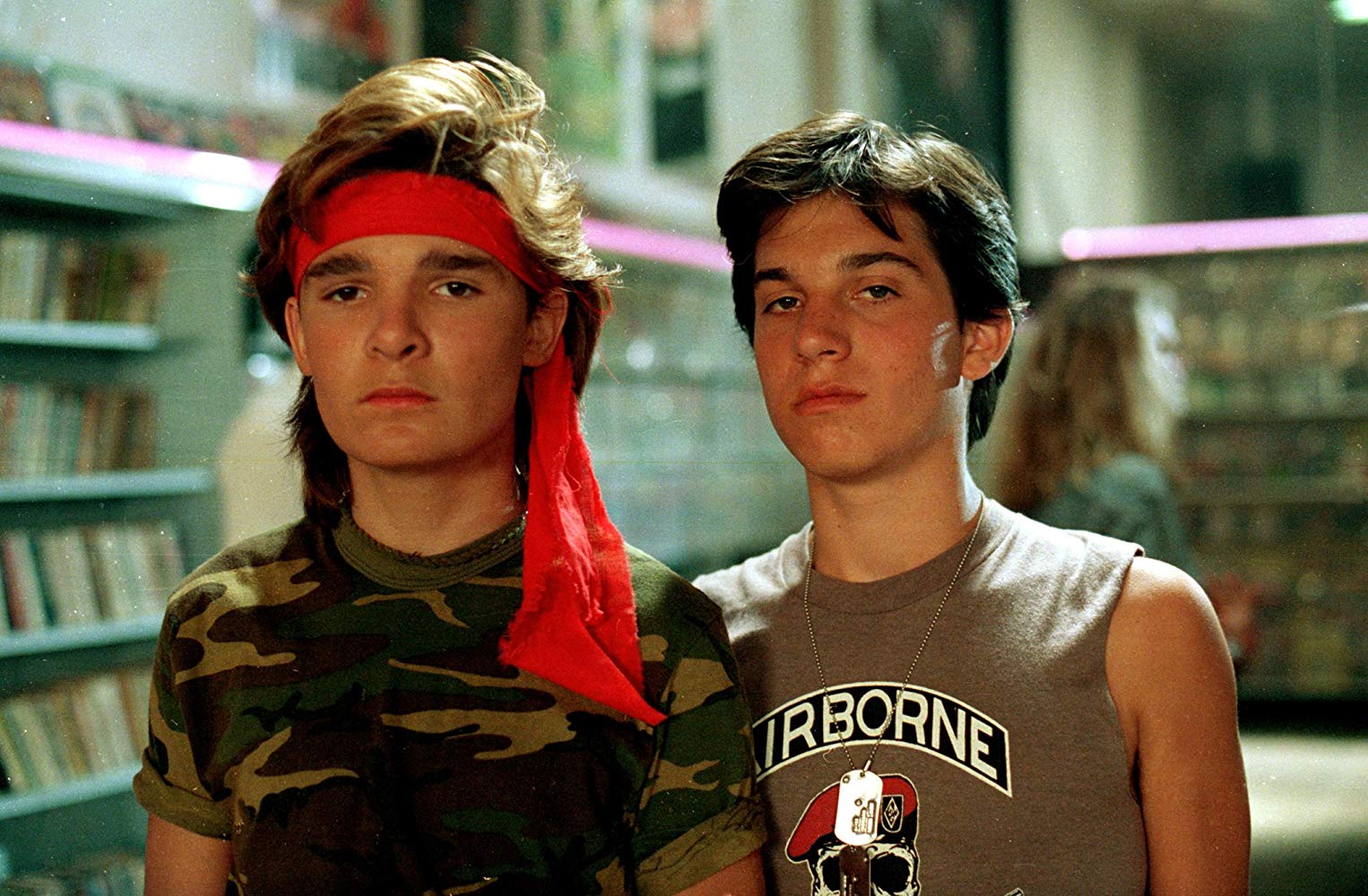 As romance blossoms between Michael and Star, their resistance to their vampiric urges weakens through a series of simple but thrillingly effective atmospheric set pieces courtesy of Schumacher and his production team. Eventually, our heroes find themselves besieged by David and his entourage, still hoping to recruit Michael, Star and Laddie but happy to eat the others.

But is David the true Big Bad of The Lost Boys, the powerful head vampire whose lineage now extends to Michael? Could it be someone else they’ve recently met in their travels? That’s for me to know, and you to find out, dear reader. Let’s just say that there is plenty of comedy, blood and guts to be had, and a terrifically of-its-era soundtrack of niche hits that cement this as perhaps the ultimate modern vampire adventure.

Schumacher was something of a throwback in Hollywood, a chameleonic director who hopped from genre to genre with relative ease during an era in the late 20th century where most big directors were typically more pigeonholed. Schumacher was at his absolute most essential, however, when grappling with young people confronted by extraordinary circumstances in genre thrillers. The Lost Boys and Flatliners (1990) represent his crowning achievements in this regard.

Though he is notorious for a certain pair of hokey franchise pictures featuring a certain pair of rubber nipples, the rest of Schumacher’s filmography beyond Batman sequels is decorated with a wide-ranging array of multifaceted movies, though all bear an unmistakable kinetic visual energy. Schumacher certainly had some uneven output as a director (St. Elmo’s Fire and The Client join Batman Forever and Batman And Robin in this latter category), but the glories of the peaks overshadow the shortcomings of the valleys. And say what you will about his misses, but they were certainly never boring. Schumacher’s directorial highlights beyond Flatliners and The Lost Boys: the excellent contained-location Colin Farrell thriller Phone Booth (2002); the Vietnam War training camp drama Tigerland (2000) that marked Farrell’s first-ever starring role; the pulpy John Grisham legal smash A Time To Kill (1996, but it’s more pertinent than ever) starring Samuel L. Jackson, Sandra Bullock and Matthew McConaughey; the nasty Michael Douglas LA vengeance picture Falling Down (1993); and the gritty neo-noir crime thriller 8mm (1999), featuring atypically restrained performances from Nic Cage and Joaquin Phoenix.

The director eventually confided to Roger Ebert in a 2000 interview that his exorbitantly pricey Batman sequels were uncomfortable for him to make, saying that the weight of studio expectations and production elements made the process so clinical that “you’re constantly trying to get some humanity out of it.” He was clearly more in his element with smaller, more streamlined films where character was king and the thrills were more localized, as opposed to the bombastic histrionics of his cape-and-cowl adventures.

But I digress. Schumacher’s sensibilities when approaching The Lost Boys ultimately were what took its original screenplay from being just another Monster Squad-esque kiddie adventure into something decidedly more fascinating and distinctive, full of a more nihilistic morbidity and decidedly adolescent sexual vibrance. Schumacher notes in the “Retrospective” documentary that the original draft of the screenplay, penned by Janice Fischer and James Jeremias, “was kind of like Goonies Go Vampire… Everyone in it was eight, there was not a girl.” After reading this decidedly more G-rated initial draft, Schumacher went for a jog to ruminate. “While I was running, I thought, ‘Why couldn’t [the vampires’ cave lair] be this kind of Death in Venice hotel that fell into the San Andreas Fault and why couldn’t the vampires be teenagers and why couldn’t it be sexy and why couldn’t they look like English gypsies and why couldn’t they have motorcycles?'” All of these instincts were spot-on, and helped mold Boys into something special. Jeffrey Boam (also responsible for writing The Dead Zone, Indiana Jones and the Last Crusade, and Fearless Leader Joe Dante’s Innerspace), was brought on to reshape the original draft.

Beyond being a well-told narrative full of fascinating characters and a lively mix of horror and humor, the film also stands the test of time thanks to the technical artisans assembled by its innovative helmer. Cinematographer Michael Chapman, a veteran of such Scorsese classics as Taxi Driver and Raging Bull who had moved on to directing his own features, was happy to step back behind the lens for The Lost Boys. “That was my vampire movie and I jumped at the chance,” Chapman notes in “Lost Boys: A Retrospective.” “The best work a cameraman can do often comes from the impetus of the style of the director,” Chapman observes (and he should know). “Joel had great visual style.”

Schumacher didn’t stop his inspired behind-the-scenes recruiting with Chapman. Production designer Bo Welch made a lot out of a little, according to Schumacher and Haim. His attention to detail gave the boardwalk design a lived-in hyper-realism, and the vampires’ sea cave lair a timeless gothic flair. Welch was also responsible for the looks of Tim Burton classics Beetlejuice, Edward Scissorhands and Batman Returns… but, surprisingly, not Schumacher’s followup, Batman Forever. Costume designer Susan Becker — who also collaborated with Schumacher on St. Elmo’s Fire and, more importantly, Flatliners — outfits the vampire clan in spectacular out-of-time rock star pirate garb. Composer Thomas Newman supplies an excellent, robustly percussive score in between a soundtrack otherwise populated with great ’80s pop and retro rock classics. Tops among these is Gerard McMahon’s moody synth-pop masterpiece “Cry Little Sister,” the movie’s nominal theme song that is so hauntingly great that it reoccurs throughout the film as a cue.

Schumacher is careful to note across the supplemental features of the film’s excellent Blu-ray and online releases that the filmmakers were operating on a small budget for a Warner Brothers studio picture at the time of its production ($8.5 million, according to its Wikipedia entry), but he clearly was able to cultivate creepiness with atmospheric visuals and tacitly-employed vampires. The creature effects work, spearheaded by Greg Cannom, is fairly minimal here, mostly relegated to sinister character makeups and grisly dying vampire puppets.

The movie’s second vampire attack sequence serves as a great example of the production team’s minimalist ethos being maximized. They achieve a lot with little more than two great screamers, some neon red lighting and deep shadows, roving overhead camerawork, and presumably a pulley system to yank the two victims out of frame.

Other effective scary scenes that thrive without much more than great cinematography, lighting, sound effects and editing include the moment when Michael, struggling to come to terms with his metamorphosing state, tries to eat Sam as he bathes; Max being ambiguously accosted to by Sam and the Frog Brothers at the Grandpa Emerson’s house over a charged dinner; and Lucy being chased by secret “hound of hell” Thorn as Max sleeps. 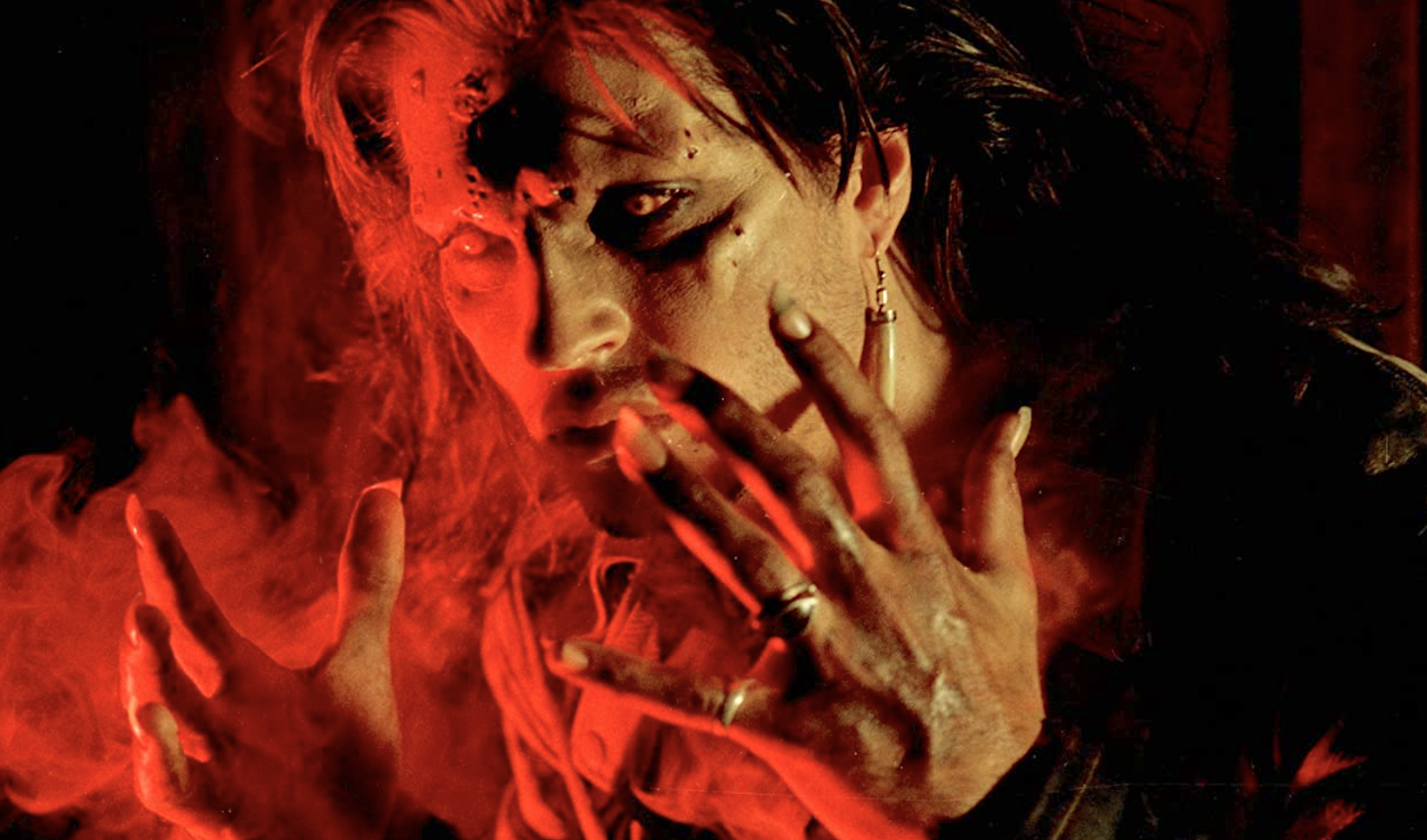 …Speaking of those boardwalk saxophone concerts, Tim Cappello’s iconic performance while covering The Call’s “I Still Believe” serves as the setting for Michael’s discovery of Star in the film. Meeting a beautiful girl with great taste in music at a California beach concert is the dream for many of us, and The Lost Boys brilliantly captures this with that signature Schumacher style, along with a litany of many other uniquely adolescent dreams and nightmares. It’s a great moment in a great movie.